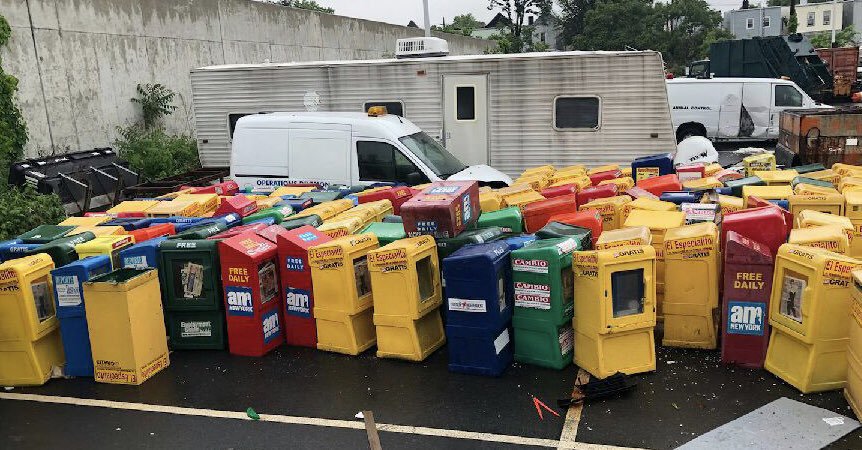 In early June 2018, the city of Jersey City removed over 240 community newspaper distribution boxes from the city’s streets. In a tweet, Jersey City mayor Steven Fulop announced that the city was removing the newspaper boxes because they were cluttering the city’s sidewalks.

For #JerseyCity residents: We continue to remove these from the streets as many are non functioning, they clutter the sidewalks, and many just become trash cans. We have 240 so far w/more to do. If we accidentally took one that has permits to be there please reach out to DPW pic.twitter.com/ecfVn4L4rn

The city’s new policy came as a surprise to newspaper publishers.

Anthony Ibarria, general manager of Hispanic weekly paper El Especialito, told Gothamist that no one called the paper before seizing its boxes.

Peter Rugh, an associate editor at The Indypendent — a community paper based in Brooklyn with a paper box in Jersey City — told the Freedom of the Press Foundation that his publication was not contacted prior to the removal of its box, even though it prominently displays contact information.

“News boxes have been on the streets for decades unperturbed, including the first five years the mayor has been in office,” he said.

Rugh sees the removal of the boxes as a threat to press freedom.

“[The removal] sets a dangerous precedent — not only for the press but for the public who rely on the coverage we provide to stay informed and make decisions regarding, among other things, who to vote for,” he said. “People say print is dying but remaining a print publication allows us to reach an audience who might never stumble upon us online, many of whom do not have regular access to the web. It should be very troubling to people that the mayor has created a newspaper blackout because he didn’t like the way the dispensers look.”

Fulop did not respond to a request from Freedom of the Press Foundation for comment, but Jersey City Press Secretary Hannah Peterson confirmed that the city has not yet implemented a formal permitting process for newspaper boxes.

She said that the Jersey City city council plans to pass a measure in the future to establish a permit process.

Peterson defended the city’s new policy, saying that the boxes were cluttering the streets and also posed a potential “security risk” since dangerous items could be hidden in them.

“The same way that the city is concerned with open trash cans in terms of large amounts of people gathering, you don’t anywhere where anything could be hidden,” she said.

Peterson said she did not know whether the city had received complaints from the public that the boxes cluttered the streets or posed a security risk. She did not provide an answer when asked whether the city intends to take similar measures for other facilities in public spaces like clothing donation boxes and planters.

She did not provide an explanation as to why news organizations were not notified about the city’s new policy.

Following a week of public protest and legal threats, the Jersey City mayor backed down and agreed to return the community newspaper boxes to the city’s streets.

The Indypendent reports that Newsday — parent company of amNewYork and El Especialito — threatened to sue Jersey City for violating the First Amendment after it removed the paper’s newspaper boxes.

“As you are undoubtedly aware, the distribution of newspapers via newspaper boxes is protected under the constitutional principles of freedom of speech and the press,” an attorney for Newsday wrote in a letter to mayor Steven Fulop.

On June 13, supporters of The Indypendent, El Especialito, and other community newspapers held a rally in front of city hall to protest the removal of the newspaper boxes. During the protest, Indypendent associate editor Peter Rugh was arrested for disorderly conduct.

On June 18, The Indypendent reported that Jersey City mayor Steven Fulop had agreed to return all of the community newspaper boxes to the streets.

“We set aside much of our regular work for a week to organize and lead a smart, strategic campaign for the return of all the boxes,” Indypendent editor in chief John Tarleton said in a statement. “We weren’t looking for this fight. But when it came to us there was no way we could ignore such a fundamental assault on freedom of press, especially at a time when President Trump is attacking the media’s legitimacy on a near-daily basis.”