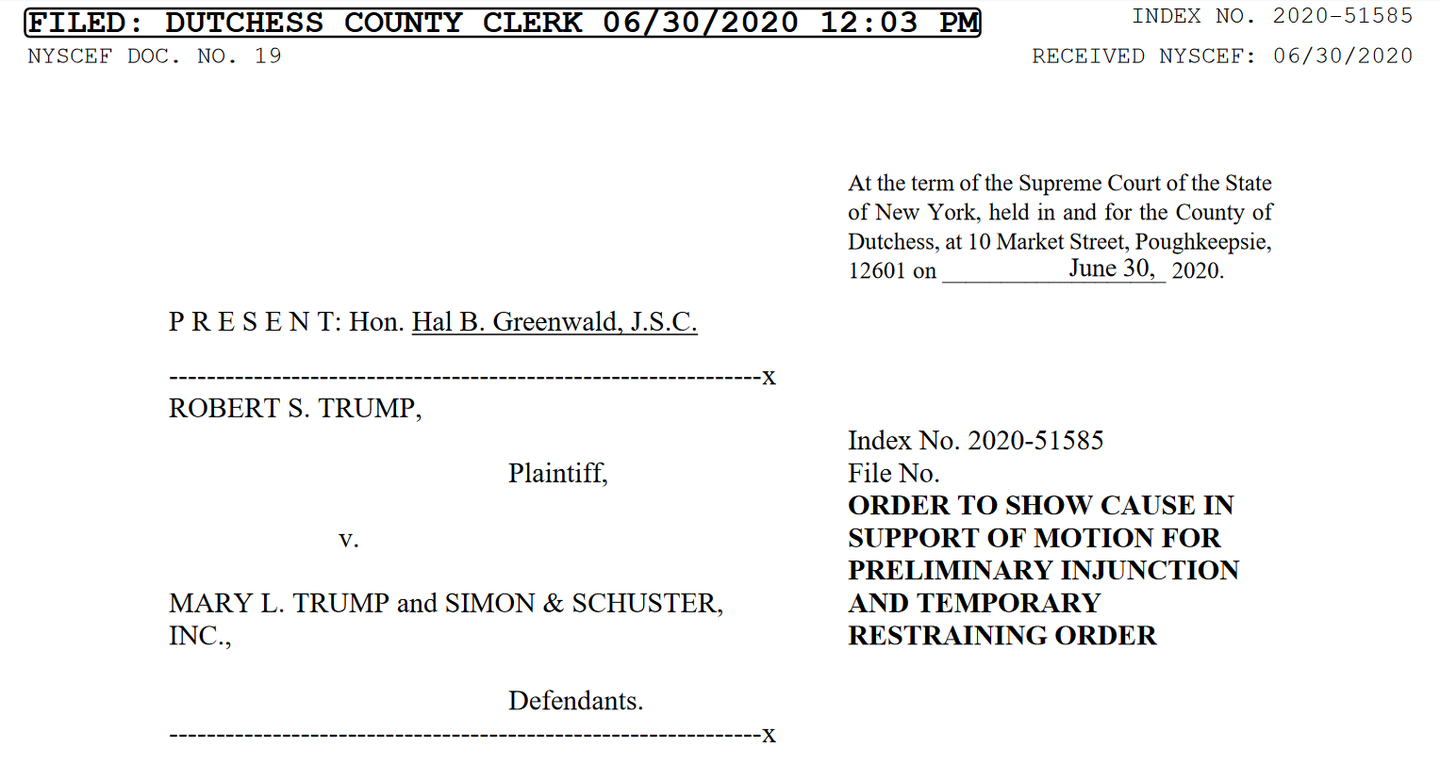 A portion of the initial order granting a temporary restraining orders against Mary L. Trump and Simon & Schuster on June 30, 2020.

The book — “Too Much and Never Enough: How My Family Created the World’s Most Dangerous Man” and scheduled for release in July — details Mary L. Trump’s relationships with the president, family members and her father, Fred Trump Jr.

Judge Hal B. Greenwald granted the temporary restraining order at the request of President Trump’s younger brother Robert, who alleged that the book violates a non-disclosure agreement signed by members of the family as part of the settlement of Fred Trump Sr.’s estate following his death in 1999.

According to court filings, the agreement included a pledge not to indirectly or directly publish any memoir. Robert Trump asserted that her book may “contain material that could harm him” or members of the family “by divulging private or disparaging information about their relationship to the public.”

Attorneys for Mary Trump and Simon & Schuster filed appeals the same day, arguing that the order constituted a prior restraint on core political speech in violation of the First Amendment, Politico reported. The attorneys also noted the impropriety of granting an injunction without allowing the author and publisher to provide a legal briefing to the court.

Mary Trump’s attorney, Ted Boutrous Jr., said in a statement, “This book, which addresses matters of great public concern and importance about a sitting president in an election year, should not be suppressed even for one day.”

The Reporter’s Committee for Freedom of the Press, the Association of American Publishers and PEN America submitted an amicus brief highlighting the unprecedented nature of the order and the unenforceability of such a non-disclosure agreement.

“There can be no doubt that the Book’s subject matter is of immense public interest,” RCFP’s Legal Director Katie Townsend wrote. “Simply put, whatever embarrassment [Robert Trump] speculates he or the President may experience from the publication or dissemination of a Book ‘divulging private or disparaging information’ to the public cannot remotely approach the type of extraordinary harm that could justify a prior restraint against either Defendant.” RCFP is a partner of the U.S. Press Freedom Tracker.

Judge Alan D. Scheinkman of the New York Supreme Court’s appellate division lifted the restraining order against Simon & Schuster the following day, July 1, leaving the one against Mary Trump in place. The Washington Post reported that the decision allows the publisher to proceed with the distribution of the book ahead of the planned release.

Simon & Schuster said in a statement to the Associated Press that the ruling was a victory.

The book, it said, was of “great interest and importance to the national discourse that fully deserves to be published for the benefit of the American public.”

Robert Trump’s lawyer, Charles Harder, argued in a reply filed on July 7 that the book consists solely of Mary Trump’s “personal observations, not political commentary,” and is therefore not entitled to the same protections and scrutiny as other materials, like the Pentagon Papers.

Harder, who did not respond to an emailed request for comment, called for the judge to uphold restraining orders against both Mary Trump and Simon & Schuster, adding that at its core, the case is not about the First Amendment.

“The ‘prior restraint’ doctrine Defendants invoke applies to a completely different type of injunction against speech and has no application where a party has contracted away her right to speak in exchange for valid consideration,” he wrote.

Boutrous said in a statement to the Tracker that “Robert Trump’s brief defies the First Amendment, ignores basic contract law and fails completely to justify a prior restraint muzzling Mary Trump.”

Attorneys for Simon & Schuster did not respond to emailed requests for comment.

In a decision on July 13 — one day before the book was set to be published — Greenwald vacated the temporary restraining order against Mary Trump. In that order, he also denied Robert Trump’s requests for injunctions against both Mary Trump and Simon & Schuster.

“In the matter before this Court, Plaintiff [Robert Trump] has failed to meet his burden of demonstrating imminent, irreparable harm, to him,” Greenwald wrote. “There is no doubt that the Book is out in the public eye in significant quantities and has reached millions of people by the tremendous attention it has gained by the media.”