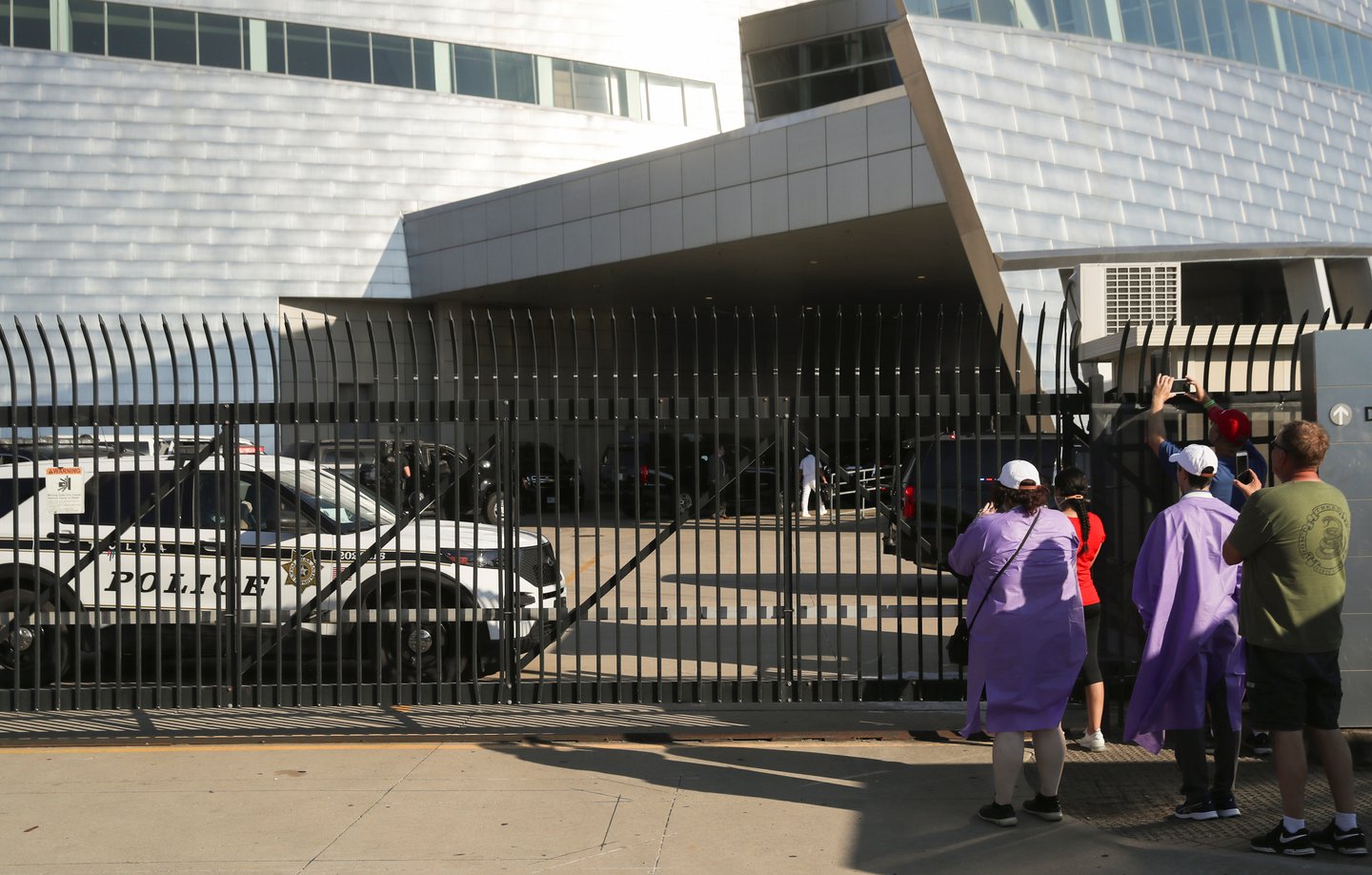 The exterior of Tulsa’s BOK Center, where President Donald Trump held his first re-election campaign rally in many months on June 20, 2020.

Texas photojournalist Alan Pogue was arrested while documenting police arresting others outside of President Donald Trump’s campaign rally in Tulsa, Oklahoma, on June 20, 2020.

The Texas Observer confirmed to the U.S. Press Freedom Tracker that Pogue was covering the rally for the outlet. Pogue is also the owner of the Texas Center for Documentary Photography and was a combat medic in the Vietnam War.

Pogue told the Tracker that had already passed through security into the BOK Center when he heard somebody yell that something was happening with the police outside.

“So I grabbed my camera bag and ran out front, but by the time I got there the three people had already been arrested and were being led across some grass to a police van,” Pogue said. “I followed the police and the three people and took some photographs.”

After the individuals were in the van, however, Pogue said the officers from the Tulsa Police turned to him “almost in unison” and asked who he was.

Pogue’s arrest report, which was released to the Tracker, states that Pogue followed police into a restricted area of the Trump rally and refused to leave, stating that he was media. The report also states that Pogue was allegedly “unable to provide proof of being with the media.”

Pogue told the Tracker that the police narrative is completely inaccurate.

“One police officer told me to stand back just a little bit more,” Pogue said. “So, I took a couple of giant steps backward and he was satisfied, so I just kept taking pictures. No one else said anything to me. There was nothing to indicate that I shouldn’t be there and nobody told me I couldn’t be.”

Pogue said that when the officers turned to him and asked who he was, he identified himself as a photojournalist, showed them the wristband he received after passing through the rally’s security screening and handed them his business card.

“It was really generational: One of the younger police officers said, ‘Well, you’ve got your wristband, you’re obviously a photojournalist. I guess you can go now,’” Pogue said. “Then an older officer said, ‘No, no, no, you can’t go now.’”

Officers searched through his camera bag, which contained not only his equipment but a medical kit and a bulletproof vest that he had worn through security. Pogue told the Tracker that, during the search, one of the officers said, “It looks like he’s some kind of social justice advocate.”

When Pogue located his digital copy of a letter from the Observer verifying that he was on assignment for the news organization, he showed it to the older officer.

“[The officer] then grabs my iPhone and is flipping through my emails, and I said, ‘Officer, you do not have my permission to look through my iPhone,” Pogue said. “But, he saw that I’m also a member of the Veterans for Peace, and that pretty much nailed me.”

Pogue said that he was placed under arrest, but that the officers were not rough with him and didn’t zip-tie his hands too tightly.

A spokesperson from the Tulsa County jail told the Tracker that Pogue was arrested at approximately 5:40 p.m., and booked in the jail at 7:17 p.m. He was released on a $500 bond paid by the Tulsa Bail Project at around 11:20 p.m.

The Tulsa Police Department, the arresting agency, did not respond to requests for comment.

Pogue was charged with obstructing or interfering with an officer, the spokesperson said, which is a misdemeanor punishable by up to one year in jail, a $500 fine or both.

Pogue’s belongings — including his wallet, ID, phone and equipment — were not returned to him upon his release. He was told he would have to come back to the county jail at 8 a.m. on June 22; when he arrived that Monday officers informed him that his two cameras, three lenses, cellphone, memory cards, camera bag and bulletproof vest were all being held as evidence.

“Obviously all they would really need is my compact flash card, nothing else really matters,” Pogue said. “It’s just harassment. There’s no intel to be gathered from my lenses.”

“I am deprived of the tools of my trade for no good reason,” he added.

Tristan Ahtone, editor-in-chief for the Observer, told the Tracker, “We condemn the arrest of reporters by security forces and demand that Tulsa police release [Pogue’s] equipment immediately.”

Pogue said that his arraignment is set for July 10, but that he is hopeful the charges will be dismissed and his equipment returned before that date.

Texas photojournalist Alan Pogue told the Committee to Protect Journalists, a founding partner of the U.S. Press Freedom Tracker, that the prosecutor declined to pursue charges against him in early August, approximately six weeks after his arrest.

Pogue was arrested while documenting police arresting others outside of President Donald Trump’s campaign rally in Tulsa, Oklahoma, on June 20, 2020. Pogue told the Tracker at the time that all of his photography equipment and safety gear were seized and held in police custody until the prosecutor formally declined to pursue charges.

“My photographic equipment will be shipped to me by the attorney representing me,” Pogue told CPJ. He added, however, that his iPhone 11 Pro was transferred by the Tulsa Police Department into FBI custody, where it remains.

“What possible excuse could they have? I didn’t commit a crime,” Pogue told the Tracker in mid-October.

Neither the FBI nor the Tulsa Police Department responded to requests for comment.

Texas-based photojournalist Alan Pogue told the U.S. Press Freedom Tracker that the Secret Service returned his cellphone in January 2021, more than six months after it was confiscated during his arrest.

Pogue was arrested while documenting police arresting others outside of then-President Donald Trump’s campaign rally in Tulsa, Oklahoma, on June 20, 2020.

Pogue told the Tracker at the time that all of his photography equipment and safety gear were seized and held in police custody until the prosecutor formally declined to pursue charges in August 2020.

Pogue said that for reasons that were not made clear to him, his iPhone 11 Pro was then transferred into FBI custody.

On Jan. 8, 2021, Pogue told the Tracker via text message that his phone had been returned by the Secret Service.

“[I] had it wiped clean but I’ll never trust it,” Pogue wrote.

When reached for comment, a Secret Service spokesperson to the Tracker the agency has no record of the incident.

The FBI did not respond to an email requesting comment.