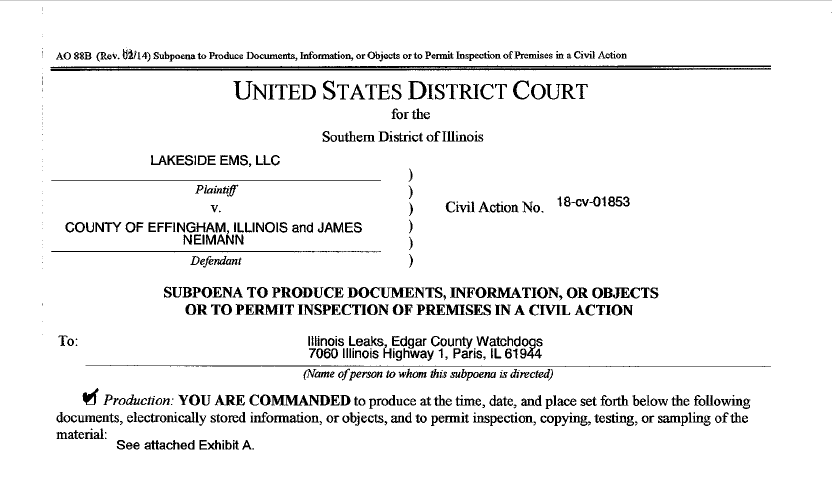 As part of a federal civil rights lawsuit brought by Lakeside EMS, LLC, against the county, the two Aug. 27, 2019, subpoenas ordered Edgar County Watchdogs and Allen to produce communications or documents exchanged with Lakeside CEO Jerrod Estes, as well as with any “employee or agent” of Lakeside or the county. They also order the turnover of copies of articles written or generated relating to Effingham County, county Board Chairman Jim Niemann or Lakeside.

“We wrote several articles about the process which the county used to award the contract to the current emergency service provider: it was done without putting it up for bid and board members have believed conflicts of interest because they have family members working there,” co-founder John Kraft told the U.S. Press Freedom Tracker. “So, basically they’re asking for all of our sources and the information we gave back-and-forth.”

Allen, who wrote many of the articles, told the Tracker that the only documents he has that fall under the subpoena are ones he received from Effingham County through public records requests.

“They know exactly what I got from the county because I FOIA’ed it. So, why did they waste my time with a subpoena for records they already gave me?” Allen said. “It’s their way of trying to create a legal burden on us as well, because there’s no reason for that subpoena.”

Allen also noted that Edgar County Watchdogs has been pursuing a Freedom of Information Act violation claim against the county for nearly two years, pressing for the release of documents related to the ambulance service investigation.

The subpoenas ordered the documents produced by Sept. 16, but Kraft told the Tracker that the group’s attorney, government transparency and media lawyer Matt Topic, filed for an extension of 30 days on compliance.

The federal case was dismissed without prejudice on Sept. 11 by U.S. District Judge for the Southern District of Illinois Nancy Rosenstengel, and as a result the subpoenas were dropped.

Bryan Kibler, the state attorney representing Effingham County, told the Tracker that the case was dismissed pending the results of the state case involving the ambulance service and the county. Kibler said that he would not rule out refiling the subpoenas against the Edgar County Watchdogs and Allen if necessary in the future.

The Tracker has documented multiple other subpoenas against Edgar County Watchdogs in 2019, including a subpoena for their communications and documents relating to the College of DuPage and a subpoena for the group’s Dropbox contents. A motion to quash the former is still pending and the latter was quashed on Feb. 11. 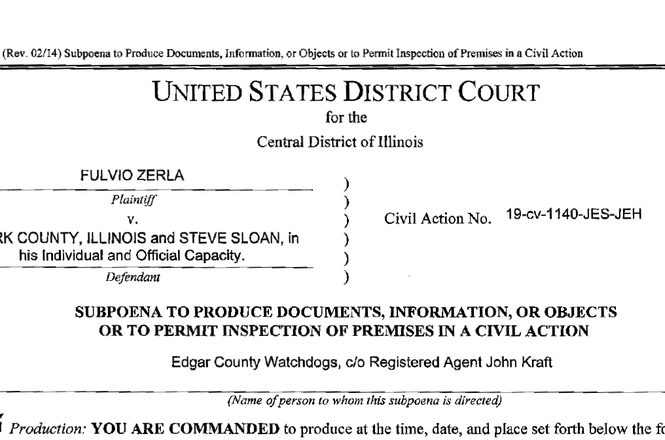 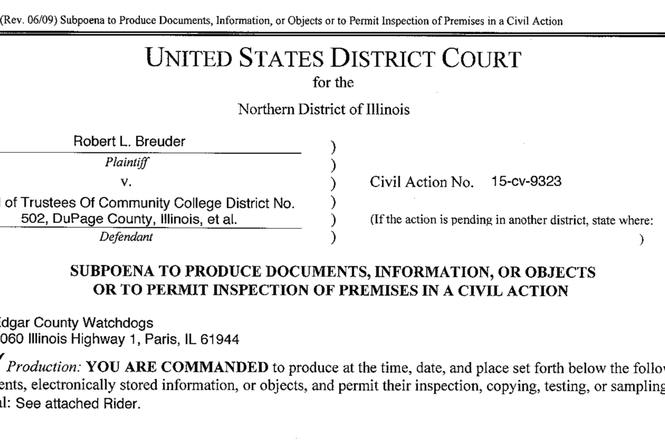 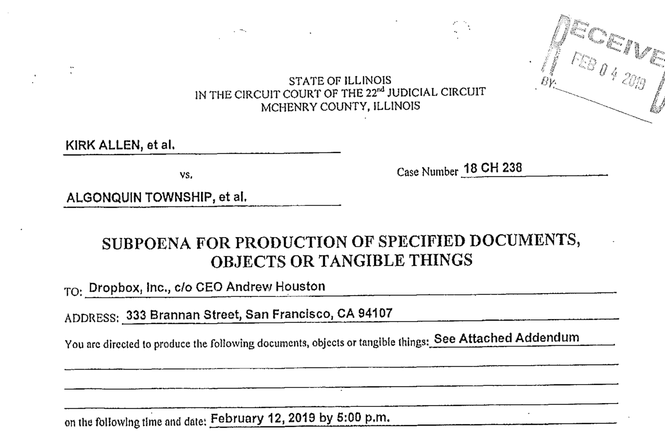 Journalist Fenit Nirappil was subpoenaed on April 22, 2021, in a lawsuit involving former Chicago police officers for documents related to his work on two stories for the Medill Innocence Project nearly a decade earlier, according to the Reporters Committee for the Freedom of the Press.Nirappil, now a journalist for The Washington Post, was a part of a team of Northwestern University students who investigated the conviction of former police officer Ariel Gomez during the 2011-2012 academic year, according to …
More related incidents