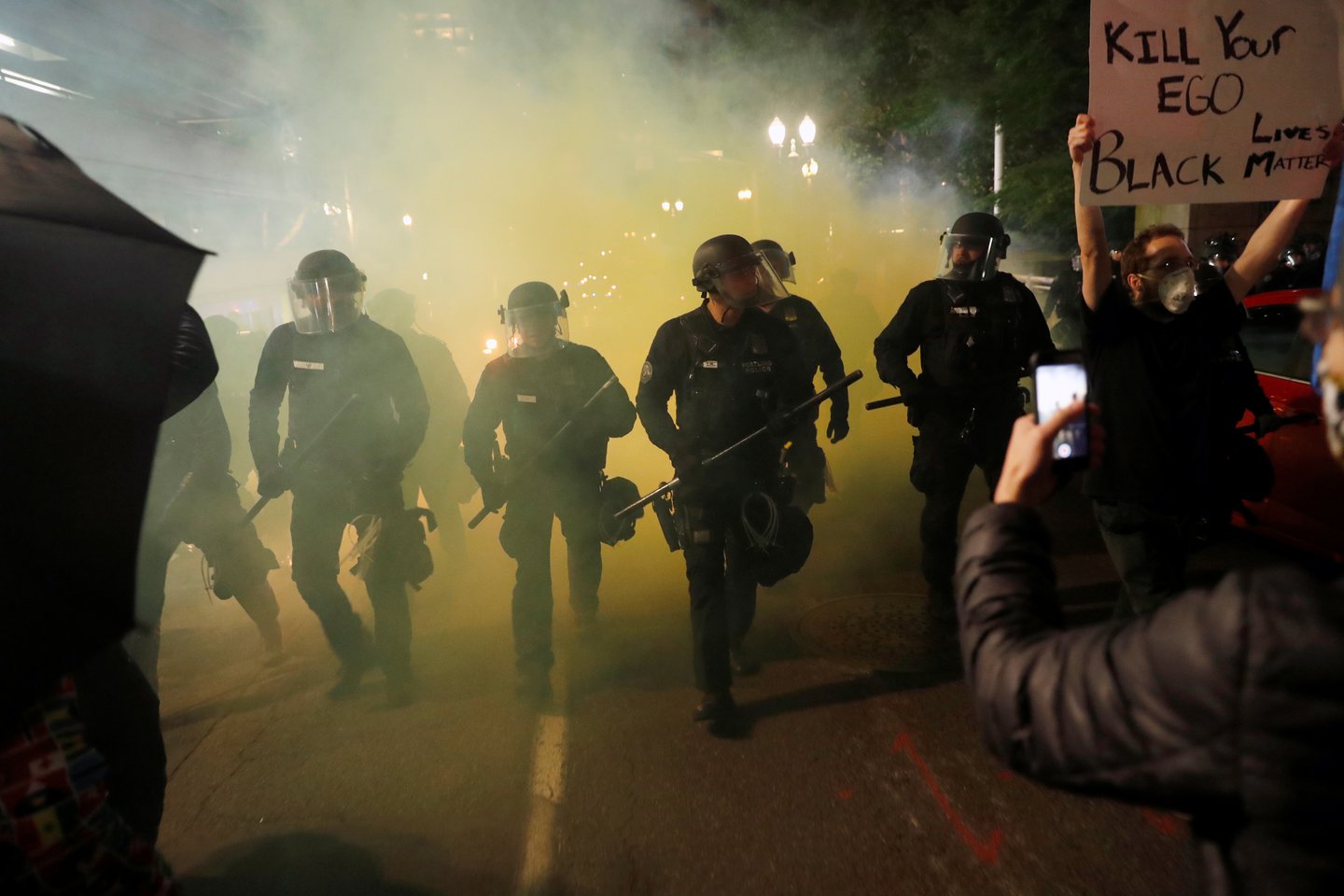 Two Portland-based journalists from local news outlets said they were pushed by police officers in separate incidents on June 13, 2020, while covering demonstrations.

The two journalists were documenting some of the many protests that have broken out across the U.S. in response to police violence and in support of the Black Lives Matter movement following the May 25 death of George Floyd. The U.S. Press Freedom Tracker is documenting assaults, arrests and other incidents involving journalists covering protests across the country.

In Portland, nightly protests over the death of Floyd began on May 29, prompting Mayor Ted Wheeler to declare an 8 p.m. curfew that lasted three days. But even after the curfew was lifted, Portland law enforcement continued to target journalists, according to a class-action lawsuit filed on June 28 by the American Civil Liberties Union Foundation of Oregon. The ACLU lawsuit resulted in a temporary restraining order against the Portland Police Bureau, and eventually led to a preliminary injunction in July barring the police from harming or impeding journalists and legal observers.

In the early morning hours of June 13, Nakamura was covering protests in downtown Portland around the Multnomah County Justice Center, which houses a jail, courtrooms and a police precinct. Most protesters were congregating in Chapman Square, across the street from the Justice Center.

At around 12:30 a.m., Portland police declared the demonstration an “unlawful assembly.” Officers fired tear gas and flash bangs, then rushed into the park to clear the area of demonstrators.

“It’s a chaotic scene that unfolds quickly,” Nakamura told the Tracker. “I was photographing and held up — which I always do — my I.D. and my camera. I was at the time saying, ‘press, press.’”

When the police instructed her to move north, Nakamura obeyed. “I turned around and I was walking, and I got pushed by a police officer,” she said. “Then I got batoned, slammed on the back as I’m walking.” When she tried to explain that she was with The Oregonian, the officer said, ‘I don’t give a fuck who you are,’” according to Nakamura.

“Physical assault is not normal,” said Nakamura. “It’s not something anyone should tolerate well. It’s not right.”

After Nakamura tweeted about the incident a couple of days later, Portland Mayor Ted Wheeler, who also holds the title of police commissioner, responded in a tweet: “This is extremely concerning. Journalists need to be able to cover the protests safely. I know @portlandpolice works hard to protect the rights of our press, but there are alarming incidents that need to be addressed.”

Later that day, as another round of protests kicked off, Sparling of the Portland Tribune was covering demonstrators who were yet again gathering in Chapman Square. A little after 10:30 p.m., the Portland police declared the protest an “unlawful assembly” and began to fire crowd-control munitions and tear gas to clear the square. Sparling followed a group of about 50 protesters who fled the area and then formed a line on Southwest Main Street, next to the Arlene Schnitzer Concert Hall.

As the police were warning protesters that the downtown area was closed and they needed to leave, Sparling — who was filming the scene with his cell phone and had a camera strapped around his neck — moved to the sidewalk so he could document the scene away from the crowd. “As a journalist, I was staying out because that’s when people want observers on the ground — when munitions are going, and orders are being enforced with force,” he told the Tracker.

When the police started to charge toward the demonstrators, Sparling turned the corner onto Southwest Park Avenue. “But the officer appeared around the corner as well,” he said.

Footage that Starling posted on Twitter at around 11:50 p.m. shows an officer running around the corner and — right after Sparling calls out that he was “media” — shoving him into a wall. The officer could be heard saying, “I don’t give a shit.” and ordering him to leave the area.

“I didn’t break any bones. But it was a scary moment,” Sparling told the Tracker. “I was on the sidewalk not doing anything other than my job, other than being there and trying to observe.”

Sparling wasn’t unsure if the police targeted him because he was a journalist, noting that although his camera was hanging from around his neck, his press badge may have been hard to see.

After getting shoved, Sparling walked down the rest of the block to leave the area. As he was walking away, a crowd-control munition hit his foot, leaving a red welt, he said.

In an article about the incidents involving Nakamura and Sparling by KATU, the local ABC affiliate in Portland asked the Portland police for comment on the video showing Sparling getting shoved. KATU reported the police as saying that they couldn’t tell from the footage whether the officer had made contact with Sparling.

The Oregonian, Nakamura’s employer, and the Portland Tribune, Sparling’s employer, have both filed complaints about the incidents with the Portland Independent Police Review, an independent agency that investigates allegations of police misconduct.

“Both of those investigations are underway,” Ross Caldwell, the director of the Independent Police Review, told the Tracker. “We have a huge volume of cases, as you can imagine, so everything is taking longer than it normally does.”

In response to questions about the incidents involving Nakamura and Sparling, Derek Carmon, a spokesman for the Portland Police Bureau, told the Tracker, “We will not be commenting in regard to these two incidents at this time” because “there is a TRO in place and because the preliminary injunction is still an open litigation case.”

Four journalists were pushed by law enforcement officers while covering demonstrations in Portland, Oregon, on Nov. 4, 2020.The journalists — documentary filmmaker Lance Bangs, independent photojournalists Mason Lake and Maranie Staab, as well as a member of a press collective called the 45th Parallel Absurdist Brigade who asked to remain anonymous — were documenting protests on the day after the election.Protests had been held in Portland on almost a nightly basis since the death of George Floyd in Minneapolis on …

Independent photojournalist threatened by man with a gun in Portland

An unidentified man threatened independent photojournalist Maranie Staab with a gun as she covered protests in downtown Portland, Oregon on Oct. 24, 2020.Staab, whose photos of the protests in Portland have been published by Reuters, The New Yorker and Agence France-Presse, was documenting one of the protests that have been held almost nightly in the city in response to police violence and in support of the Black Lives Matter movement following the May 25 killing of George Floyd, a Black …
More related incidents