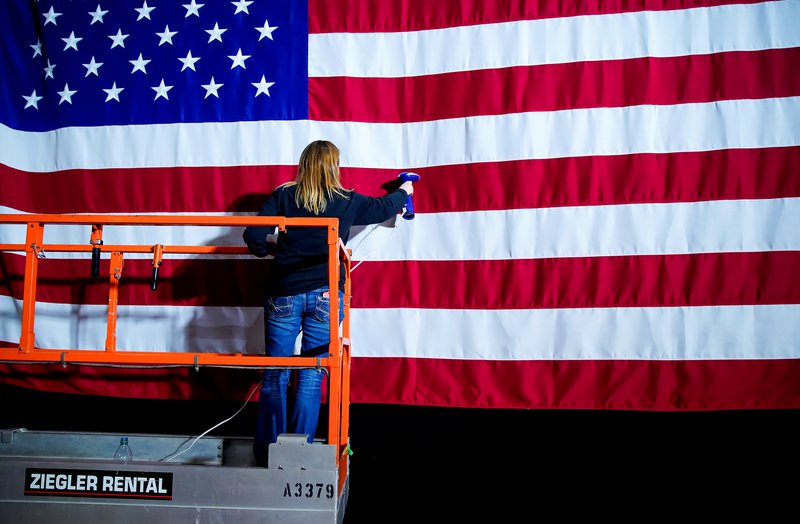 This specialized year-long election tracking project aims to collect press freedom aggressions from federal candidates and their teams in one searchable place.

If a reporter is denied access or removed from a federal campaign event, we’ll review on a case-by-case basis to determine if that particular incident implicates First Amendment concerns. We’ll take into account if the candidate had Secret Service protection, if the campaign is paid for by public funds, who was involved in the denial/removal decision, and any other relevant factors at our disposal.

We launched this blog in the belief that how candidates treat the press while campaigning may give us insight into how they would act as elected officials. From Nov. 3, 2019, until Election Day 2020, we'll update this blog with relevant incidents from across the U.S., with the most recent news at top.

A source in the Trump campaign told Deadline that freelance reporter Kathy Gray was escorted from the rally when they were alerted to the fact that she was reporting from the general audience and had not applied for press credentials through the normal process.

In tweets posted that day but subsequently deleted, Gray said, “I’ve just been kicked out of the trump rally,” and, “First for me: Trump campaign tracked me down from pics I tweeted and escorted me out.”

Danielle Rhoades Ha, vice president of communications at The Times, told Deadline, “We’re disappointed that the Trump campaign refused to credential our freelancer and then, when she registered and attended as a member of the public, they ejected her from the event.”

According to the source, Gray was told she could stay if she stopped reporting; Deadline reported that Gray was not offered that opportunity, but did not cite its source.

Neither Gray nor the Trump campaign responded to a request for comment.

Former Vice President Joe Biden’s campaign barred reporters from listening to a question-and-answer session during a fundraiser on May 21, 2020, breaking from its usual procedures.

The Associated Press reported that rather than allowing reporters to participate via video conference — as had been common during previous fundraisers during the coronavirus pandemic — the phone line journalists were listening to was abruptly disconnected.

Reporters were unsuccessful in their attempts to rejoin the call and the campaign did not provide an explanation for more than an hour.

“We will continue to ensure press access to our virtual finance events as part of our campaign’s commitment to transparency,” said Biden campaign Deputy Manager Rufus Gifford in a statement to the AP about the disconnection. “One that vastly exceeds anything that Donald Trump and his campaign have offered the American people.”

Indeed, the AP reported that the Trump campaign does not typically allow press into his fundraising events, and President Barack Obama also routinely had members of the media leave his fundraisers during Q&A sessions.

The Biden campaign, which did not immediately respond to requests for comment, has often allowed reporters to attend such events in their entirety, citing the necessity of transparency.

Jordan Chariton, the co-founder and CEO of independent media outlet Status Coup, told the U.S. Press Freedom Tracker that he and freelance filmmaker Jamal Curtis Jones were harassed by campaign staff during a rally for presidential candidate Pete Buttigieg on Feb. 9, 2020, in New Hampshire.

Chariton told the Tracker that he had been removed from the campaign’s press list in December. A fellow journalist shared information with Chariton about the Nashua rally, and he and Jones were able to register for credentials for the event.

When the pair arrived at the rally, they interviewed attendees in line for about half an hour, he said.

“Pretty quickly, I noticed a staffer was following me up and down the line as I interviewed supporters,” Chariton told the Tracker. “She was not so subtly hovering over me. I approached her when I was finished and told her she wasn’t being subtle. She replied: ‘I know.’”

Chariton and Jones then entered the event venue, checked in at the press desk and received their name tags and credentials. After conducting a few more interviews, Chariton said they stopped when Buttigieg began to speak.

Chariton tweeted that soon after, a staffer approached them and asked whether they had sneaked into the event. A different staffer later approached cameraman Jones.

“Without saying anything, she ripped off his name tag and said, ‘I don’t think you’re supposed to have credentials,’” Chariton told the Tracker.

She then approached Chariton and told them that they needed to leave. Chariton tweeted a clip of their interaction, during which she said she had received “reports of [them] disrupting people on line outside.”

After she walked away, a different staffer approached the journalists and apologized for their treatment. Chariton said he and Jones left of their own volition shortly after.

Chariton tweeted that he emailed the campaign press secretary, Chris Meagher, explaining the incidents, asking for an apology to his cameraman and posing a series of questions, but he did not receive a response.

Neither the Buttigieg campaign nor Jones immediately responded to request for comment.

BuzzFeed reporter Miriam Elder told the U.S. Press Freedom Tracker that she and Editor-in-Chief Ben Smith had been going in and out of the watch party throughout the event without issue. A little before 11 p.m., Smith said, two private security guards barred them from re-entry.

“We asked if it was all media or just us,” Elder told the Tracker. “They said just us.”

According to a tweet posted by Elder, the security guards told her and Smith they had been “uninvited” from the party. Smith posted a tweet saying reporters from other outlets were allowed to remain, which Elder confirmed to the Tracker.

.@MiriamElder and I just got tossed out of a Trump event in West Des Moines, with no explanation and after several pleasant conversations with the members of Congress here like @GOPLeader & @EliseStefanik. Bizarre. pic.twitter.com/pwLHCGZ1cn

Elder said that she has seen the security guards who prevented them from re-entering the watch party at previous Trump campaign events in other states.

President Donald Trump’s reelection campaign escorted a Bloomberg News reporter from an event in West Des Moines, Iowa, on Feb. 3, 2020, just ahead of the state’s caucuses.

A Trump campaign official confirmed to The Hill that reporter Jennifer Jacobs was ushered out of the press conference in accordance with a policy to no longer issue press credentials to the media outlet.

“It was cordial, but she wasn’t credentialed per our policy,” the campaign official told The Hill.

Neither Jacobs nor Bloomberg News immediately responded to requests for comment on Jacobs’ removal.

Reporters from multiple news outlets were barred from entering a reelection rally for President Donald Trump in Des Moines, Iowa, on Jan. 30, 2020.

Olivia Nuzzi of New York Magazine tweeted that campaign staffers forced dozens of pre-credentialed members of the press to wait outside and yelled at them before the doors were permanently closed. According to the Des Moines Register, at least 30 members of the media were denied access to the event, including a Register reporter and photographer.

The Trump campaign’s principal deputy communications director, Erin Perrine, responded to Nuzzi in a tweet denying the reporter’s claims. Perrine also wrote that the fire marshal closed the door and that Nuzzi should have contacted her about issues rather than turning to Twitter.

Nuzzi responded, stating that dozens of reporters could confirm that staff shouted at the press and that she had tried to contact Perrine.

Jackie Kucinich, Washington bureau chief for The Daily Beast, confirmed Nuzzi’s version of events on Twitter, citing a lack of communication and yelling from staff members.

The editorial board of the Daily Iowan, the independent student newspaper of the University of Iowa, published an editorial in response to its own reporters being denied admittance to the event. According to the editorial, correspondents from NPR, New York Magazine, Daily Beast and local Iowa daily the Carroll Times Herald were among those shut out from the rally.

The DI reviewed photographs from reporters inside the event that showed empty seats in the press room after the cutoff time for media access.

The board said it reached out to the Trump campaign for an explanation and the staffer who answered the phone requested the newspaper email questions instead. There was no response to questions sent through email that night.

The DI wrote that the exclusion of media outlets wasn’t part of an effort to keep the contents of his speech secret, as the event was streamed online.

“This is about intimidating the free press, and it cannot stand in America,” the DI wrote.

President Donald Trump’s reelection campaign announced on Dec. 2 that it would no longer issue press credentials to Bloomberg News journalists.

After Bloomberg founder and majority owner Michael Bloomberg announced his election bid on Nov. 24, the outlet sent out a memo obtained by CNBC stating that it would no longer critically cover Democratic candidates but would continue to cover the president “as the government of the day.”

In a statement published on the campaign’s Twitter account, Trump campaign manager Brad Parscale announced that they will no longer credential Bloomberg journalists for Trump campaign events, alleging that the outlet’s decision revealed its bias.

Trump’s campaign said it would decide “on a case-by-case basis” whether to respond to press inquiries from individual Bloomberg reporters.

The same day, Bloomberg Editor-in-Chief John Micklethwait refuted the allegations of bias in a statement.

“We have covered Donald Trump fairly and in an unbiased way since he became a candidate in 2015 and will continue to do so despite the restrictions imposed by the Trump campaign,” Micklethwait said.

Student journalists from the Kentucky Kernel and the Transy Rambler were denied media access to President Donald Trump’s Lexington rally on Nov. 4, 2019.

An email sent to the Kentucky Kernel, the newspaper at the University of Kentucky, by Trump’s reelection campaign gave no reason for the denial other than “an overwhelming press credential request.”

The email received by the Transy Rambler, the newspaper at Transylvania University, did not state a reason.

"It's a shame that the Trump campaign does not take the Kentucky Kernel seriously,” UK student media adviser Ryan Craig told the Kernel, “since we literally found this out while coming back from winning a national Pacemaker award for journalistic excellence."

The U.S. Press Freedom Tracker was launched by Freedom of the Press Foundation, Committee to Protect Journalists and other partner organizations in 2017 to document press freedom violations in the United States.

CPJ's Emergencies Response Team has developed a safety kit for journalists in the U.S. covering the elections. If you are a journalist covering the 2020 election, sign up for the #PressSafety2020 mailing list to receive safety advisories and updates.