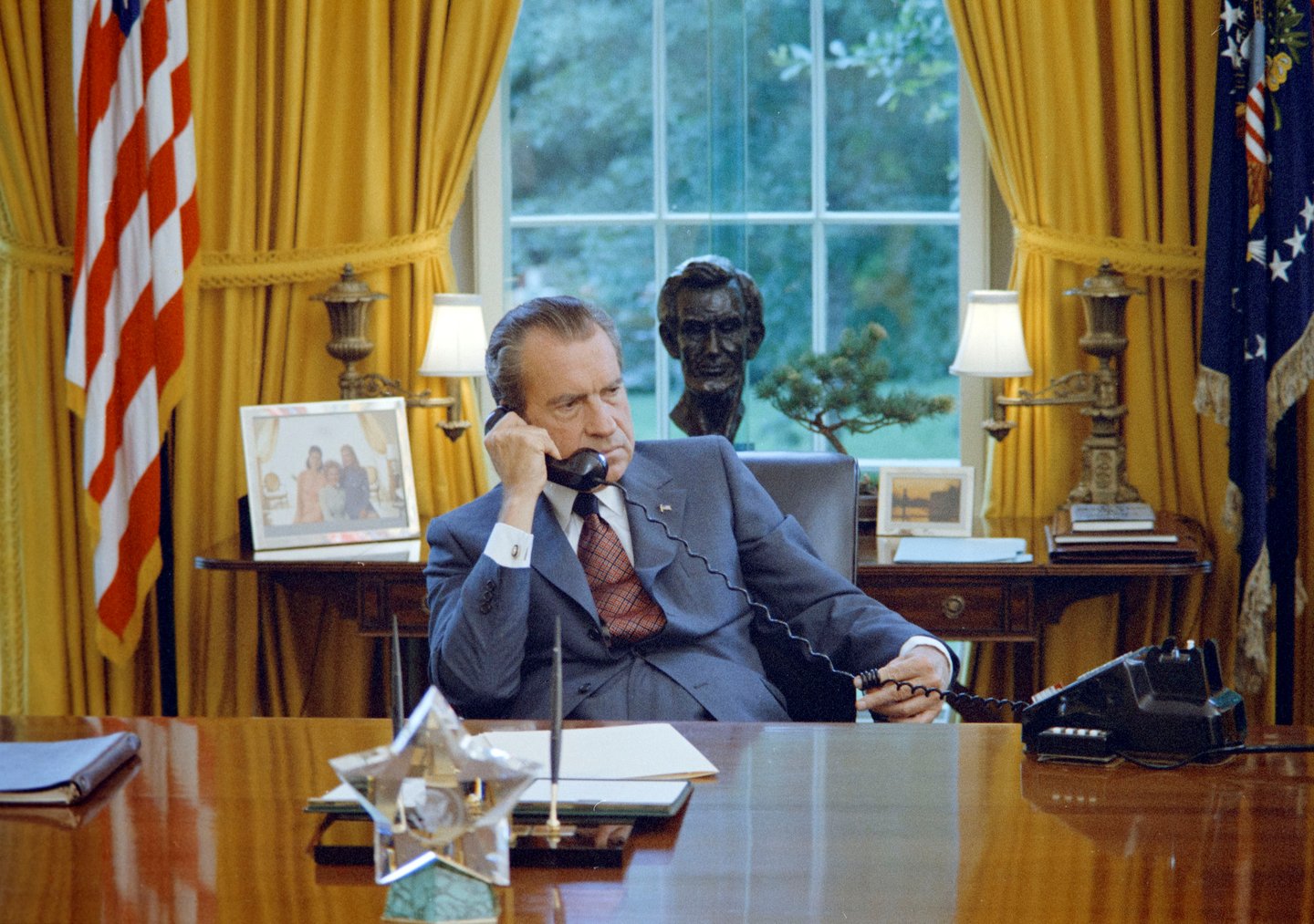 U.S. President Richard Nixon seated at his desk in the White House Oval Office on June 23, 1972.

Courtesy The Nixon Library and Museum

Goodale, the former general counsel for The New York Times, was referring to the Espionage Act of 1917, a law passed during World War I — 100 years ago this month. Initially, the law was used against anti-war activists and foreign spies. Since the 1970s, though, the law has been re-interpreted as a broad anti-leaks law that outlaws the sharing of classified information with anyone, for any reason.

Goodale first started digging into the history and meaning of the Espionage Act in 1971, when the Nixon administration tried to use the law to get the Times, which he represented, to censor its newspaper.

In June 1971, The New York Times started publishing excerpts of the Pentagon Papers — a 7,000 page, top secret Defense Department report on America’s foreign policy in Vietnam, Cambodia and Laos from 1945 through 1967. The Times had obtained a copy of the study from whistleblower Daniel Ellsberg, a military analyst who had worked on the report and secretly made photocopies of it in 1969. (Ellsberg later helped found the Freedom of the Press Foundation and is a member of the organization’s board of directors.)

The Nixon administration was furious to see the Times’ reporting on the real history of the Vietnam War and demanded the paper immediately stop publishing excerpts of the Pentagon Papers. When the Times refused, the Department of Justice argued in federal court that the publication of the classified report violated the Espionage Act (specifically, sub-section 793(e)) and asked for an injunction that would prohibit the paper from publishing any more portions of the report. It was the first time that the U.S. government had attempted to censor a newspaper in federal court.

The cases ultimately ended up in front of the Supreme Court, which famously ruled 6-3 that the First Amendment protected newspapers from government censorship in almost all cases. But the narrow decision was only concerned with the question of “prior restraint” — whether or not the government could prevent a newspaper from publishing something—not whether the government could criminally prosecute journalists after the information had been published.

The Court left that question for another time.

Meanwhile, the Nixon administration tried to criminally prosecute Ellsberg for leaking the information to the Times.

Ellsberg and his friend Anthony Russo, who had helped him photocopy the classified report, had already been arrested and indicted under the Espionage Act. They were the first people indicted under the law for providing information to journalists. But the case was dismissed in 1973, once it was revealed that Nixon’s goons had tried to find dirt on Ellsberg by illegally breaking into his psychiatrist’s office and had also attempted to bribe the trial judge with the FBI directorship.

Far less known than either the Supreme Court case or the Ellsberg prosecution was the Nixon administration’s attempt to criminally prosecute the Times.

The Justice Department, led by Attorney General John Mitchell, ended up impaneling a secret grand jury in Boston to investigate Times reporter Neil Sheehan and his wife Susan Sheehan, who was a staff writer at the New Yorker at the time. Though the grand jury spent months subpoenaing journalists and anti-war activists to gather information about how Ellsberg leaked the documents to the Times and Post, many of those subpoenaed refused to testify, and the ultimately the jury disbanded without indicting anyone.

Yet the federal government has still tried to use the Espionage Act as a tool against the press several times since.

In 1975, after the Times reported that U.S. submarines were secretly spying on Soviet communications, President Gerald Ford’s administration — including chief of staff Donald Rumsfeld and deputy chief of staff Dick Cheney — talked to the Department of Justice about the possibility of using the Espionage Act against Seymour Hersh, the Times investigative reporter who wrote the article, and his source. In the end, though, the Ford administration took no action.

In 1981, Reagan’s Department of Justice threatened to prosecute author James Bamford under the Espionage Act. Bamford, who would go on to write several best selling books about the NSA, was writing his first book about the agency and had used the Freedom of Information Act to legally obtain a Justice Department report investigating the agency’s possibly criminal activities. The NSA claimed that the documents were still classified and ordered Bamford to hand them over.

In 1986, CIA director William Casey reportedly talked to deputy attorney general D. Lowell Jensen about the possibility of prosecuting the Times, Washington Post, Newsweek, Time magazine and The Washington Times under the Espionage Act. Casey later met with Post publisher Ben Bradlee and threatened to use the Espionage Act against the paper. Ultimately, nothing came of his threats.

The government finally succeeded, however, in applying the Espionage Act to a source of the press in 1988, when the Fourth Circuit appellate court upheld the conviction of Samuel Morison.

Morison, an intelligence analyst, had sent the British magazine Jane’s Defence Weekly copies of satellite photos that showed a new type of aircraft carrier that the Soviets were building at a Ukrainian shipyard. In 1984, he was arrested and convicted under the Espionage Act. He appealed the conviction to the Fourth Circuit Court of Appeals, arguing that the Espionage Act should not apply to someone who leaked to the press, rather than to a foreign government.

The Fourth Circuit rejected that argument in an opinion that laid the legal foundation for the modern use of the Espionage Act against news organizations’ sources. Morison then appealed to the Supreme Court, but the Court declined to hear the case. (Though he was later pardoned by President Clinton, the case law is still cited to this day).

Goodale, who represented the Times in the Pentagon Papers case, believes that the Fourth Circuit’s interpretation of the Espionage Act was wrong. In an interview, he said that the courts need to recognize a distinction between between providing classified information to a foreign government (espionage) and providing classified information to a journalist (not espionage).

Since the Morison decision, though, the courts have sided with the government’s broad interpretation of the Espionage Act as criminalizing all disclosures of classified information, no matter the recipient.

In 2005, nearly two decades after the Morison decision, the George W. Bush administration revived the use of the Espionage Act when the Justice Department accused Lawrence Franklin, a Department of Defense employee, of leaking classified information about U.S. policy toward Iran to two lobbyists for the American Israel Public Affairs Committee, who then allegedly passed some of the information on to the Israeli government. Franklin never gave the lobbyists any classified documents; he and the lobbyists just verbally discussed information that the government deemed classified.

Both Franklin and the AIPAC lobbyists were arrested and charged under the Espionage Act. Franklin eventually pleaded guilty and was sentenced to more than 12 years in prison, though this was later reduced to 10 months of house arrest, in part because he agreed to cooperate with the government’s case against the two lobbyists.

The AIPAC case was the first (and so far only) instance in which Espionage Act charges were brought against someone who had never worked for the government or had a security clearance. It alarmed press freedom groups at the time, given the fact that any Espionage Act precedent involving private citizens could eventually be applied to the press.

The lobbyists argued that the application of the Espionage Act in their case violated the First Amendment rights, since they were not government employees who had agreed to keep the information secret. The federal judge overseeing the case rejected this argument. However, the judge also ruled that the prosecution would have to prove that the lobbyists had intended to harm the national security of the U.S. in order to win the case. To the great relief of media lawyers, the prosecution dropped the case against the lobbyists.

In retrospect, the Franklin and AIPAC cases were the start of a new era of aggressive use the Espionage Act in cases that affected journalists. In December 2005, the Times reported that the NSA had secretly wiretapped millions of Americans’ phone calls without warrants. In response, the Department of Justice launched a criminal investigation — not into the NSA’s warrantless wiretapping program, which it had secretly approved, but into how the Times found out about it. The Justice Department reportedly assigned five prosecutors and 25 FBI agents to the investigation into the Times’ sources.

In May 2006, in the midst of that investigation, Attorney General Alberto Gonzales suggested that the Department of Justice could prosecute Times reporters under the Espionage Act for reporting on the classified NSA program.

“There are some statutes on the book which, if you read the language carefully, would seem to indicate that that is a possibility,” he told ABC News.

While the Justice Department never followed through on their threat, the investigation ended up ensnaring multiple alleged whistleblowers.

In December 2008, former Justice Department attorney Thomas Tamm publicly admitted that he had been a source for the 2005 Times article. The next month, President Barack Obama — who had harshly criticized the NSA’s warrantless wiretapping program on the campaign trail — took office. Obama’s Department of Justice opted not to prosecute Tamm under the Espionage Act.

But Tamm was the exception. Under the Obama administration, the Department of Justice began its current practice of aggressively using the Espionage Act against whistleblowers and leakers who talked to journalists.

Catch up on Part I of the 100-year history of the Espionage Act here and read on to see how Obama and Trump used the law against journalists’ sources.

Peter Sterne is a senior reporter at the Freedom of the Press Foundation and the managing editor of the U.S. Press Freedom Tracker.