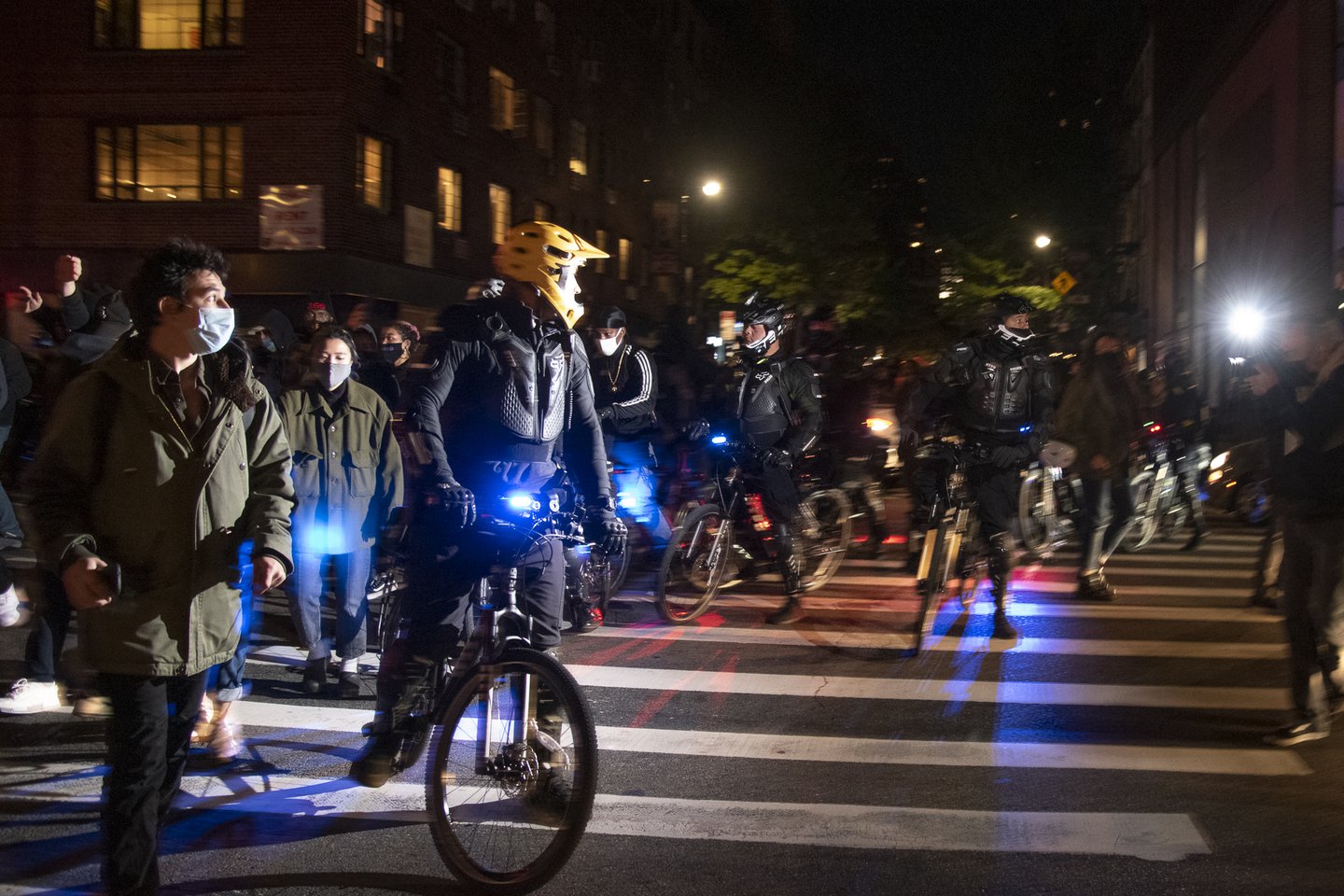 Bicycle officers with the New York City Police Department ride up to demonstrators in the People’s March for racial justice and election integrity on Nov. 4, 2020.

Munhoz, whose work has been published in Brazil and exhibited at the International Center of Photography in New York, told the U.S. Press Freedom Tracker that he was documenting a demonstration dubbed the People’s March, which began at 7:35 p.m. in Washington Square Park in Lower Manhattan. The New York Times reported the protesters were calling for every vote from the Nov. 3 election to be counted, an end to racial injustice and for police departments to be defunded.

“The marchers walked out of the park and immediately were met by the biked police,” Munhoz said. As the march advanced toward the intersection of 6th Avenue and 8th Street, he said, police tried to direct demonstrators north on 6th, “but the marchers turned left towards the stopped traffic.”

Munhoz said he got ahead of the march and began walking backward in the street, next to parked cars, while photographing the crowd. He said that around 7:55 p.m., he saw the demonstrators looking past him and, when he turned to look, saw an officer pointing directly at him.

“I don’t hear any warning, request or order. By his gesture, I thought he was just asking me to step aside and that’s what I do,” Munhoz said. “I go in the direction of the sidewalk and closer to the parked cars when another policeman holds me… and tells me to hold still.”

The officer who had pointed at him and several others suddenly surrounded him, Munhoz said, as he explained that he was a photojournalist covering the march. He said he asked several times whether he was under arrest before an officer confirmed that he was.

When the officers asked for his press pass, Munhoz said, “I tell them I don’t have one because I’m a freelancer. I explain again that I’m part of the media, that I’m just doing my job.

“I tell them I have a business card, but he says it’s not enough,” he said.

An officer identified on Munhoz’s paperwork as Martinez then handcuffed him and took him to a police vehicle to be transported to One Police Plaza, the NYPD’s headquarters in downtown New York, according to Munhoz.

“I never resisted or fought the arrest,” Munhoz said. “I kept calm, trying to explain that I was press, and when I realized that it wouldn’t make any difference I complied with everything they asked me.”

According to copies of Munhoz’s citations shared with the Tracker, he was booked at 8:17 p.m. on charges of failure to disperse and walking on the roadway. He was released a little over three hours later.

Munhoz was ordered to appear for a hearing on Feb. 1, 2021. If convicted on both charges, Munhoz faces up to 30 days imprisonment or a fine of up to $400, according to the New York penal code.

“My understanding is that, since I was ahead of the march, I was one of the first ones they spotted and it was an arbitrary decision,” Munhoz said. He added that he was arrested just as the march had begun, and he had seen no violence, looting or vandalism taking place.

Mickey Osterreicher, general counsel for the National Press Photographers Association, told the Tracker that he has contacted the New York City prosecutors’ office to request that the charges be dropped.

The New York Police Department did not respond to an emailed request for comment.

The charges brought against Brazilian photojournalist Gabriel Boaz Munhoz following his arrest during protests in New York City on Nov. 4 have been dropped.

Munhoz was arrested by New York Police Department officers while documenting a demonstration dubbed the People’s March, and was cited with failure to disperse and walking on the roadway.

National Press Photographers Association General Counsel Mickey Osterreicher, who is representing Munhoz, told the U.S. Press Freedom Tracker he entered a Notice of Appearance on Munhoz’s behalf. After corresponding with the court, Osterreicher said it confirmed that both charges against Munhoz were dropped on Nov. 12.

Munhoz told the Tracker he was relieved that the charges had been dropped.

Student journalist Emily Holshouser was one of at least four journalists detained while covering election-related protests in support of the Black Lives Matter movement in Los Angeles, California, on Nov. 4, 2020.Holshouser, who writes for California State University Northridge’s student publication The Daily Sundial, tweeted that she was covering a protest scheduled to begin at 6 p.m. outside City Hall in downtown LA.When the event dispersed at 6:30 p.m., Holshouser followed a small group of remaining demonstrators as they walked …
More related incidents