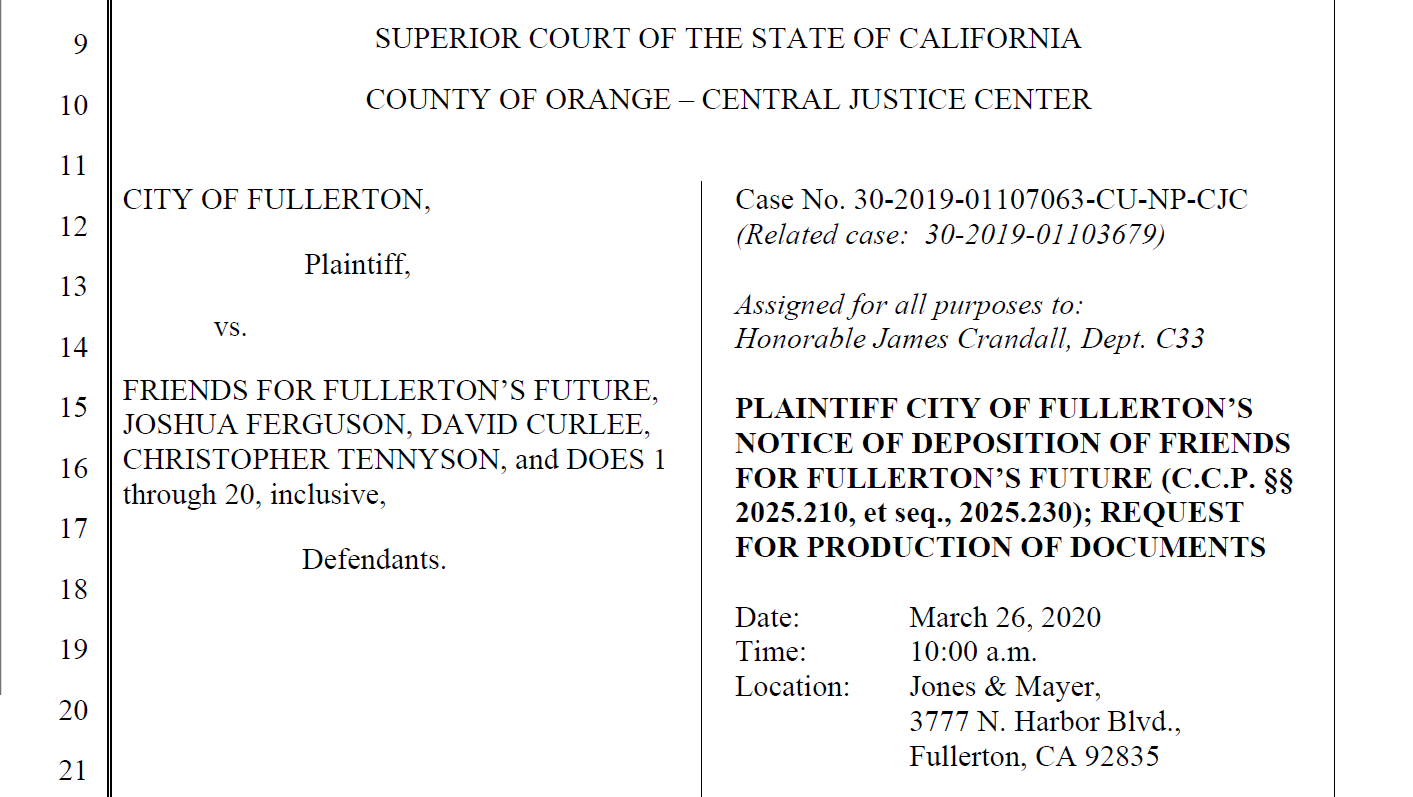 The City of Fullerton, California, filed three deposition orders for testimony and documents from Friends for Fullerton’s Future, a community blog, and two of its journalists on March 13, 2020, as part of its ongoing suit accusing them of violating state and federal anti-hacking laws.

The city’s complaint, filed Oct. 24, 2019, concerns more than a dozen documents that it alleges were illegally downloaded from the city’s account on the file hosting and sharing service Dropbox. The depositions were filed one day after a district judge granted the city a preliminary injunction, barring the blog from publishing, sharing or deleting any of the contested files. The prior restraint was stayed, or paused, fewer than two weeks later.

Joshua Ferguson and David Curlee, two of the blog’s journalists, each received a deposition subpoena ordering them to appear for questioning on March 23 and 24, respectively. A third deposition ordered that the “person most knowledgeable for defendant Friends for Fullerton’s Future” appear for questioning on March 26. The order said topics of discussion would include the structure of the blog, who its contributors are and the sources of all city documents posted to the blog.

Ferguson told the U.S. Press Freedom Tracker that no such individual exists.

“Nobody runs this blog, it’s a blog,” he said. “We do do journalistic work insofar as we report on stories — we do break stories, we do have people that we talk to — but we don’t have an official structure: I don’t have an editor.”

The blog’s attorney, Kelly Aviles, told the Tracker that a deposition order such as this is standard legal procedure when seeking information from an entity. She also said that all three orders were invalid because they were improperly filed after the city had received notice of her clients’ appeal, which stays, or pauses, all pending matters.

Kimberly Hall Barlow, attorney for the City of Fullerton, told the Tracker the orders were filed properly and that they will continue to pursue the depositions as part of the discovery process.

The deposition orders, reviewed by the Tracker, demand that the individual bring numerous documents and communications related to the city’s allegations, including around the use or possession of nearly two dozen files from the city’s Dropbox, the IP addresses for all its computers and electronic devices, Dropbox activity logs and private browser use.

They also command the production of all documents, including communications, relating to the blog’s argument that the city’s Dropbox was accessible to the public at large, and that accessing it was part of routine newsgathering.

The depositions also focus on communications around 15 public records requests, six of which were filed by Ferguson and one by Curlee. Many of the remaining requests were filed by individuals associated with Air Combat USA, Inc., a private company which has sued the city for breach of contract. The subpoenas also request copies of all communications between the blog or its staff and anyone affiliated with the corporation.

Ferguson told the Tracker that the city, essentially, wants to know everything about the blog.

“They want to know IP addresses, who accesses it, how you share data, who you talk to, all of stuff that is absolutely covered under the reporter shield laws… because they’re arguing that we’re a blog, ergo, not a news site,” he said.

Hall Barlow told the Tracker that the city’s intent is not to be punitive or suppress the press, but to retrieve the confidential documents containing the private information of multiple individuals that were downloaded from the Dropbox account.

The subpoenas request an amount of invasive information not typically seen outside of national security cases, said Aviles. The attempt to subvert California’s shield law and reporter’s privilege protections are concerning, she said.

“Not only is the entire case so outrageous that a government agency would come after an organization that was reporting on it in this fashion, claiming that they committed crimes by accessing documents that the city put on a website without any kind of protection, but then all of these procedural maneuverings by the city that have just tried to make it more difficult for the journalists — I think that is especially troubling.”

Aviles told the Tracker that she hopes all filings in the appeal will be complete in the next two to three months.

Civil liberties and First Amendment YouTuber Zhoie Perez was shot on Feb. 14, 2019, while live-streaming outside of a synagogue and high school in Los Angeles.Perez, who goes by “Furry Potato” on YouTube, was filming a security guard and his gun outside of the Etz Jacob Congregation and Ohel Chana High School in the Fairfax neighborhood of Los Angeles while the guard repeatedly asked her why she was recording.Perez did not answer, but said on the livestream that the guard …
More related incidents