On Jan. 11, 2019, journalist Davin Eldridge was found guilty of criminal contempt; sentenced to a year-long probation; and required to write an essay about respect for the court, submit it for court approval, publish it online and censor negative comments.

Eldridge, publisher of the news site and Facebook page Trappalachia, recorded and livestreamed a criminal proceeding in the Macon County Courthouse in Franklin, North Carolina, in November 2018 despite posted signs stating that recording was not permitted in the courtroom and a warning from a bailiff, the News & Observer reported.

The presiding judge, William Coward, reiterated his rule against recording and, after viewing Eldridge’s Facebook posts, ordered the journalist to return to the courtroom later that day. Eldridge did not comply with that order.

Eldridge was later charged with criminal contempt by Coward, who ordered the journalist to appear for a hearing on Jan. 11, 2019. That day, Eldridge objected to Coward overseeing his case and asked for his recusal, which Coward denied.

Coward found Eldridge guilty of criminal contempt and sentenced him to 30 days in jail. The sentence was suspended, and the trial court placed Eldridge on probation for one year with certain conditions, which included writing a 2,000-to-3,000-word essay on the subject “Respect for the Court System is Essential to the Fair Administration of Justice” and not attending “any court session in Judicial District 30A unless and until his essay has been approved and posted.”

Eldridge immediately appealed the ruling, but in December 2019, the North Carolina Court of Appeals upheld the trial court’s decision. A dissenting opinion was entered by Judge Christopher Brook, who agreed that Coward had the right to restrict recording in the courtroom and find Eldridge guilty of contempt but found that the conditions of his probation had “deeply troubling constitutional problems.”

“Although we generally do not review constitutional questions that have not first been raised in the trial court … suffice it to say that the sentencing judge has not only compelled Defendant [Eldridge] to speak within the meaning of the First Amendment, he has compelled Defendant to then continue speaking by censoring the viewpoints of other expressed in response to speech compelled by the court,” Judge Brook wrote in his dissent. “This compelled speech silencing third-party viewpoints expressed in response to compelled speech raises serious First Amendment concerns.”

On March 12, 2021, the North Carolina Supreme Court affirmed the Appeals Court’s decision without any explanation.

Davin Eldridge, publisher of the local news site and Facebook page Trappalachia, was charged with contempt of court on Dec. 3, 2018, for recording and livestreaming a criminal proceeding in November 2018 at the Macon County Courthouse in Franklin, North Carolina.The News & Observer reported that despite posted signs stating that recording was not permitted in the courtroom and a warning from a bailiff, Eldridge allegedly continued to film court proceedings. The presiding judge, William Coward, reiterated his rule against … 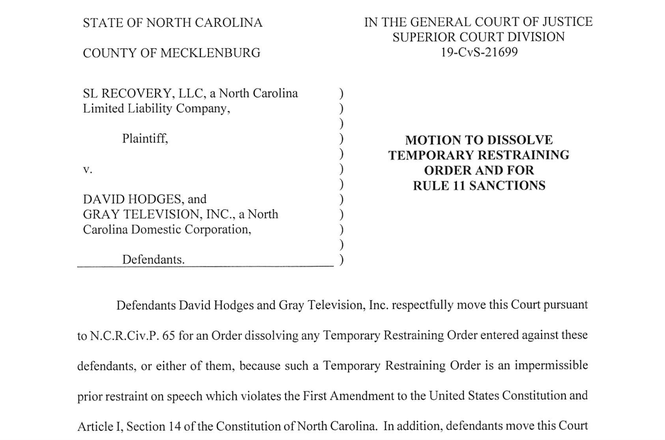