Jennifer Burbridge was arrested while filming protests in St. Louis, Missouri on Sept. 17, 2017, according to a federal lawsuit that she and her husband, Drew, filed against the city. Both Jennifer and Drew are documentary filmmakers.

The lawsuit was filed in the U.S. District Court for the Eastern District of Missouri on Sept. 26 and accuses St. Louis police officers (referred to as “John Does”) of violating their First Amendment rights.

The complaint states that Jennifer and her husband were filming protests in downtown St. Louis on Sept. 17 when they — along with protesters and other journalists — were enclosed by police in a “kettle” at the intersection of Tucker Boulevard and Washington Ave.

The complaint describes what happened next to Jennifer Burbridge:

Jennifer Burbridge was among those who were initially indirectly subjected to chemical spray by the police.

Jennifer Burbridge was forced to watch her husband and film partner Drew Burbridge being drug away by Defendants John Does #1, #2 and #3.

She was physically prevented from following or assisting her husband.

She observed the law enforcement assault and beating of her husband.

At one point, while two officers were carrying Jennifer Burbridge away, one of the officers passed another male officer and stated, “Look who I have.” Such statements illustrated a clear intent on the part of the officers to target members of the media, like the Burbridges, who were attempting to document the protests and the SLMPD police response.

Another SLMPD officer made a point to walk up to Jennifer Burbridge after she had observed her husband pepper sprayed and assaulted and exclaim, “Did you like that? Come back tomorrow and we can do this again.” Another SLMPD officer stated, “What did you think was going to happen?”

Like her husband, Jennifer Burbridge was taken into custody of the St. Louis Metropolitan Police Department who placed her in a van for transport to jail.

On the way to the jail, a detainee in the van requested the name of the transporting officers, one of who responded, “I’m Father Time.”

Jennifer Burbridge was required to submit to a jail administered pregnancy test as a condition of being released.

Jennifer Burbridge was release with a municipal charge of “failure to disperse.” 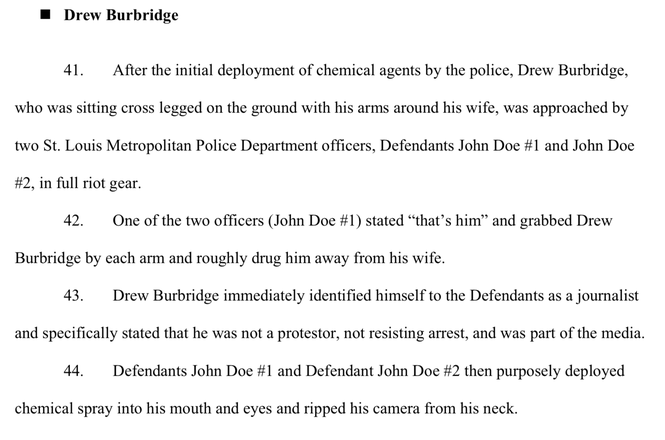