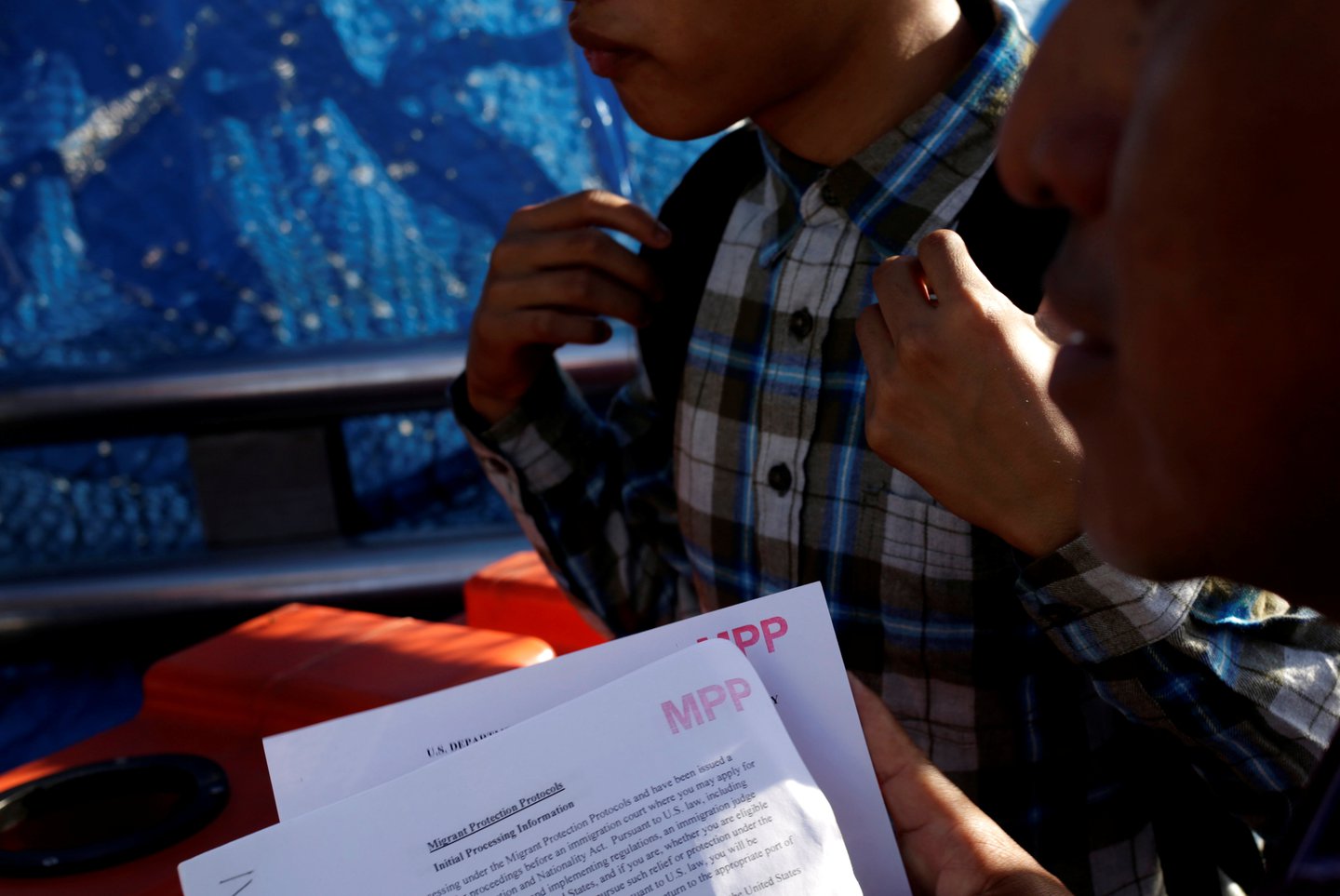 Migrants who returned voluntarily to Mexico from the U.S. under the Migrant Protection Protocol show documents to a U.S. border protection agent to attend their court hearing for asylum seekers in Ciudad Juarez, Mexico.

Members of the media were barred from observing asylum hearings held in two tent complexes in the Texas border cities of Laredo and Brownsville. The first hearing in Laredo was held on Sept. 11, and hearings began at the Brownsville tent court the next day.

Asylum seekers processed under the Trump administration’s new Migrant Protection Protocols, also known as the "Remain in Mexico" policy, crossed the border to attend the hearings held in the tent facilities beginning on Sept. 11. But journalists and members of the public were not allowed inside the tents while the hearings were in session.

BuzzFeed reporter Adolfo Flores tweeted that he had not been permitted into the tents to observe the hearings on their first day:

I wasn’t allowed to observe the first MPP/“Remain in Mexico” hearings at the tents in Laredo, TX because they’re “not open to the public,” a DHS officer said. Was told the only people allowed inside the tents DHS built are law enforcement, attorneys with clients, and contractors. pic.twitter.com/c1aT3P4dPW

Typically, asylum hearings are open to the public and the media except when limited exceptions are invoked, including when "the respondent in an asylum case, which by regulation provides for additional privacy protections, requests that the hearing be closed,” or when such closure is in the “public interest,” according to established Executive Office for Immigration Review policies.

These exceptions can be invoked on a case-by-case basis, but the access in the tent courts is being restricted to all hearings.

In a statement emailed to the U.S. Press Freedom Tracker, a Department of Homeland Security spokesperson—who declined to be identified by name—wrote that because the tent courts are located within U.S. Customs and Border Protection’s “secure port of entry property,” media access to them is limited. “Access to these temporary immigration hearing facilities will operate in accordance with practices for other secure CBP areas,” the statement said. “Requests for access by the media or by the public to the [immigration hearing facilities] will be assessed on a case-by-case basis when operationally feasible and in accordance with procedures for access to any CBP secure facility.”

Journalists can observe the hearings from San Antonio, Harlingen, and Port Isabel, Texas, where the immigration judges presiding over the hearings are located, the DHS spokesperson continued. The asylum seekers appear in the courtroom via teleconference.

This arrangement, however, means the journalists will be located at least 150 miles away from the migrants, rendering them unavailable for in-person interviews.

"Just as it's hard for judges to catch emotion and body language from a video hearing, it's going to be hard for reporters to accurately describe the scene in a hearing room if we only have access to it via video conference," Flores said in a statement emailed to the Tracker. "If there are technical issues inside one of the tent hearings we won't know what it was like for the asylum-seekers there. We'll only be able to see what the hearing was like from the judge's courtroom.”

Journalists need access to these hearings, Flores continued, to cover how the "Remain in Mexico" policy is affecting migrants. “Public hearings are supposed to be public,” Flores wrote.

Kennji Kizuka, a researcher at Human Rights First, decried the ban on journalists and outside observers in the tent courts in a statement. "By banning independent monitors and potential pro bono lawyers from tent courts, the Trump Administration is hiding information about the human rights abuses asylum seekers are suffering after being forced to return to Mexico,” the statement said. “It is just another attempt to cover up the flaws in this sham asylum process, a process created to block refugees from finding safety in the United States.”

Some 42,000 migrants are now waiting in Mexico for their asylum hearings under the so-called “Remain in Mexico” policy that has been challenged in the courts. On Sept. 11, the U.S. Supreme Court stayed an injunction in the case, allowing the Trump administration to proceed in enforcing the new policy while court challenges proceed. According to reporting from The Washington Post, the Trump administration has budgeted $155 million to cover operation of five temporary MPP courts.

Makeshift tent immigration courts in Texas have been opened to journalists and other members of the public. Access was initially restricted to just asylum seekers being processed under the Trump administration’s Migrant Protection Protocols, also known as the "Remain in Mexico" policy.

The Wall Street Journal reported in late December 2019 that U.S. Customs and Border Protection, which oversees the structures along the U.S.-Mexico border, instructed Texas officers to allow the public inside to observe the hearings.

In January 2020, The Guardian reported that it was one of the first media organizations to observe proceedings in a Brownsville court. It said there were limitations on where it was allowed to go while reporting, however, and that only initial hearings were open to the public. Merits hearings — where asylum cases are decided — were still closed, the outlet reported.

For the first time in decades the Texas Department of Criminal Justice failed to let journalists cover an execution, even though two reporters had been cleared to do so and were waiting nearby to be called into the state penitentiary in Huntsville on May 19, 2021.A database maintained by the Texas Department of Criminal Justice confirmed that there had been media in attendance at each of the state’s previous 570 executions. Prison officials said “miscommunication” had kept media from witnessing …
More related incidents