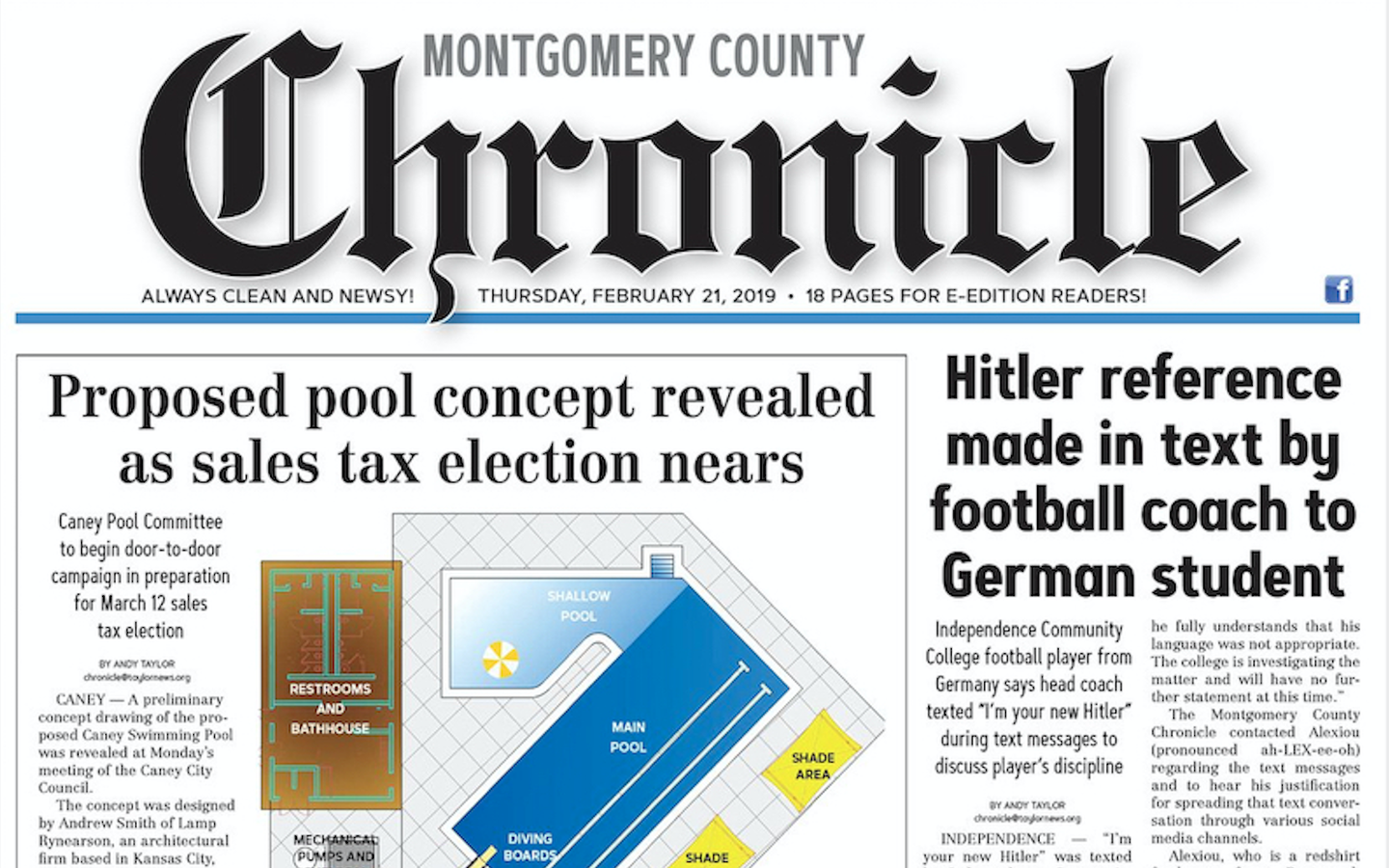 The Montgomery County Chronicle is one of two Kansas publications subpoenaed to testify in a criminal case against a community college football coach charged with blackmail, identity theft after allegedly sending false cease-and-desist emails.

Journalists at two local newspapers in Kansas have been subpoenaed for testimony as part of a criminal case against a former community college football coach featured in a Netflix documentary who allegedly impersonated a high-powered Los Angeles attorney as part of a scheme to intimidate the journalists.

The Independence Daily Reporter, its publisher, and the editor for the Montgomery County Chronicle received a subpoena dated Sept. 10, 2019.

Both the Daily Reporter and the Chronicle are based in Independence, a small town of under 9,000 people in southeastern Kansas. The town gained national fame when “Last Chance U,” a Netflix documentary series about junior college football teams, arrived in 2017 to chronicle the transformation of Independence Community College’s football program under new coach Jason Brown.

The Daily Reporter is a daily newspaper that publishes both online and in print, while the Chronicle is a weekly publication that doesn’t have a website. The Chronicle is edited by Andy Taylor, whose family has been in the newspaper business since the 1870s. Andy’s parents, Rudy and Kathy Taylor, are the paper’s owners and publishers.

Taylor told the U.S. Press Freedom Tracker that the trouble began in October 2018, after he published an editorial critical of coach Brown and the ICC football team, which had gotten into a physical fight with an opposing team the month before.

A few weeks after the editorial was published, Taylor received an email from someone claiming to be “Richard Barnwell,” an attorney at The Cochran Firm, a well-known law firm in Los Angeles. The email threatened Taylor with a lawsuit if he continued to write about Brown. (Although Taylor said he could not share copies of the actual emails in advance of the trial, he was able to describe them in general terms.)

“It looked legit,” Taylor said of the email. “It had the guy’s [photograph] on there. It had a link to the firm’s website. It was just very typical of what you’d see in any cease-and-desist letter. It was typical in the language, where it would start out saying, ‘I represent Jason Brown at Independence Community College, he is my client, any continuing effort to defame or write anything that is negative toward my client will result in immediate litigation against you, please cease and desist.’”

The email spooked Taylor, who knew that his family’s small-town newspaper could not afford to defend an expensive defamation suit.

“My parents, who are in their mid-70s, own the newspaper,” Taylor said. “They’re the publishers. So I presented them the cease-and-desist letter, and they were very quick and swift in their decision. In fact, my father said, ‘Andy, you need to cool your jets!’ Meaning, stop being critical of Jason Brown.”

Fearful of a lawsuit, the Chronicle stopped running editorials and commentary critical of Brown and the ICC football program.

Then in February 2019, a student at ICC who had been cut from the football team reached out to Taylor with an explosive tip about Brown. The student, who was originally from Germany, told Taylor that Brown had berated him in front of his teammates and mocked his heritage. After the student complained about Brown’s behavior to ICC administrators, the coach sent him a text message: “I’m your new Hitler.” The student shared a copy of the text message with Taylor.

Soon after Taylor contacted ICC’s president for comment, he received another threatening email from “Richard Barnwell.”

Taylor said this email referenced the cease-and-desist language of the first email and again threatened a defamation and libel lawsuit if he investigated further.

This time, Taylor replied to the email. The response he got from “Barnwell” was unprofessional, full of misspelled words — including the word “chronicle” — and personal insults, which made him skeptical that the man on the other end of the email was really a professional attorney. Taylor also noticed that the emails supposedly from “Barnwell” were sent from a Yahoo email address, rather than an email address associated with The Cochran Firm.

Suspicious that someone was impersonating Barnwell, Taylor called the attorney’s office and explained the situation to his secretary. Barnwell soon left Taylor a voicemail confirming that the attorney had nothing to do with the emails and had never heard of Brown.

Taylor then contacted the county sheriff’s office and told them the whole story. In May, the sheriff’s office informed Taylor that it had obtained evidence tying the fake “Barnwell” account to Brown’s electronic devices. Taylor also learned that the same email account had targeted another local newspaper — the Daily Reporter — which had run an editorial cartoon mocking Brown.

A month later, Netflix released the fourth season of “Last Chance U.” The season details the text message incident and Brown’s subsequent firing but makes no mention the pending criminal charges against him.

Taylor plans to testify at Brown’s trial, which was originally scheduled to begin in October but has since been postponed to January 2020. Both Taylor and Josh Umholtz, the publisher of the Daily Reporter, and the Daily Reporter itself appear on a list of subpoenaed witnesses. No one from the Daily Reporter has returned request for comment as to whether the organization will comply with the subpoena.

Most subpoena cases documented on the Tracker involve journalists who are being compelled to testify, often about their reporting and their confidential sources, against their will. This case is different.

Taylor described his situation as “the flip side of the conventional argument against journalists testifying,” Taylor said, since it involves journalists being the victim of a criminal attempt to intimidate the press. He said he would testify voluntarily even if he had not been subpoenaed in the case.

“I just want to tell somebody, with my hand on my Bible and under oath, that I did my job, I did it well, and somebody didn’t like that and tried to put my pen away, and that doesn’t work in America,” he said.