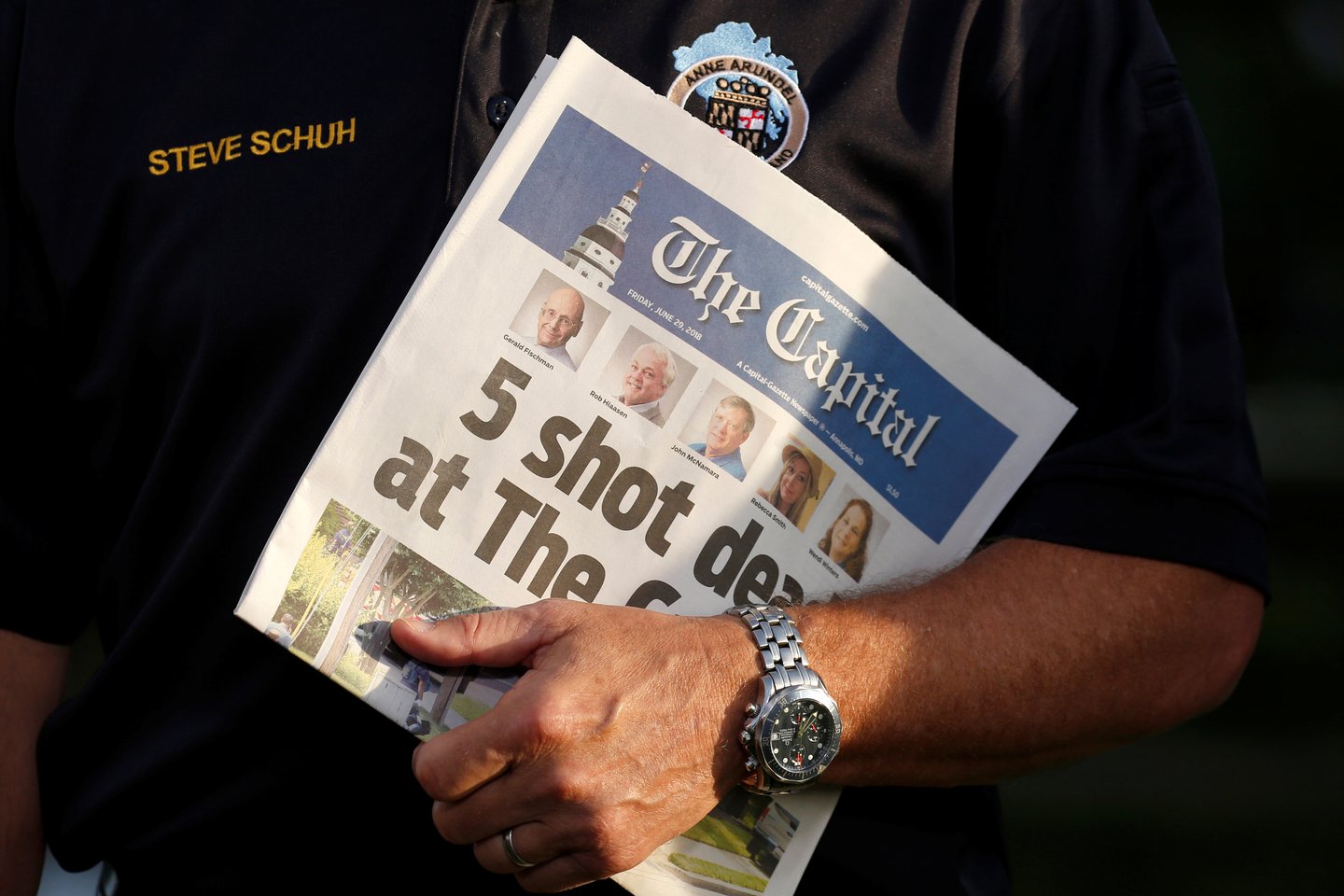 Anne Arundel county executive Steve Schuh holds a copy of The Capital newspaper, as he is interviewed on June 29, 2018, the day after a gunman killed five people and injured several others at the newspaper's offices in Annapolis, Maryland.

On June 28, 2018, a man armed with a shotgun entered the Capital Gazette newsroom in Annapolis, Maryland, and shot multiple journalists and other media workers, the Baltimore Sun reports. Five people, including four journalists, were killed in the attack, and two others were injured. Police later identified the suspected shooter as Jarrod Ramos, who had previously sued the Capital Gazette for defamation.

The shooting is the most deadly attack on journalists in the United States since the Sept. 11, 2001, terrorist attacks, according to the Committee to Protect Journalists.

Two other Capital Gazette employees, whose names were not released, were injured in the attack.

The shooting occurred on June 28 inside the Capital Gazette newsroom, which is located on the ground floor of an office building in Annapolis, Maryland. The newsroom is home to reporters for both The Capital, a daily newspaper covering Annapolis, and The Maryland Gazette, a twice-weekly paper focused on state news.

Phil Davis, a crime reporter for The Capital who was inside the newsroom during the shooting, told the Sun that he saw multiple colleagues shot. He said the scene inside the newsroom "was like a war zone." In a series of powerful tweets, he described what he witnessed.

A single shooter shot multiple people at my office, some of whom are dead.

Gunman shot through the glass door to the office and opened fire on multiple employees. Can't say much more and don't want to declare anyone dead, but it's bad.

Jarrod Ramos, the suspect in the shooting, had threatened and harassed Capital Gazette staffers for years, according to the Sun.

It began in July 2011, when Capital columnist Eric Hartley wrote about how Ramos was charged with harassment after stalking and threatening a high school classmate online. In response to Hartley's column, Ramos waged a one-man war against him and the paper. (Hartley has since left The Capital for The Virginian-Pilot, and Marquardt has retired.)

In July 2012, he filed a defamation lawsuit against Hartley, Capital Gazette Communications, and The Capital editor and publisher Tom Marquardt. Ramos represented himself in the suit, which was filed in Prince George's County, Maryland. At a March 2013 court hearing, a judge dismissed Ramos' complaint with prejudice and tried to explain to Ramos why the article was not defamatory:

You know, I understand exactly how you feel. I think people who are the subject of newspaper articles, whoever they may be, feel that there is a requirement that they be placed in the best light, or they have an opportunity to have the story reported to their satisfaction, or have the opportunity to have however much input they believe is appropriate.

But that's simply not true. There is nothing in those complaints that prove that anything that was published about you is, in fact, false. It all came from a public record. It was of the result of a criminal conviction. And it cannot give rise to a defamation suit.

Ramos appealed the judge's decision. The Maryland Court of Appeals upheld the lower court's dismissal of the case and ordered Ramos to pay Capital Gazette's legal fees. In an unpublished opinion, one of the appellate court judges wrote that "a discussion of defamation law would be an exercise in futility, because the appellant [Ramos] fails to come close to alleging a case of defamation," and sharply criticized Ramos for bringing the lawsuit:

The appellant is pro se. A lawyer would almost certainly have told him not to proceed with this case. It reveals a fundamental failure to understand what defamation law is and, more particularly, what defamation law is not. The appellant is aggrieved because the newspaper story about his guilty plea assumed that he was guilty and that the guilty plea was, therefore, properly accepted. He is aggrieved because the story was sympathetic toward the harassment victim and was not equally understanding of the harassment perpetrator. The appellant wanted equal coverage of his side of the story. He wanted a chance to put the victim in a bad light, in order to justify and explain why he did what he did. That, however, is not the function of defamation law.

Ramos then tried to appeal to the state's highest court, the Maryland Court of Appeals, which declined to hear his case.

Ramos also harassed The Capital and its reporters outside of the courtroom.

Marquardt, who served as The Capital's editor and publisher until 2012, told the Sun that he had been concerned about Ramos' obsessive hatred of the paper and whether it could escalate into violence.

"I was seriously concerned he would threaten us with physical violence,” he told the Sun. “I even told my wife, 'We have to be concerned. This guy could really hurt us.' … I remember telling our attorneys, 'This is a guy who is going to come in and shoot us.'"

Marquardt told the Los Angeles Times that when he notified the Anne Arundel County police about Ramos' harassment back in 2013, the police said they could not arrest him for his behavior toward the newspaper. Marquardt said that the paper considered getting a restraining order against Ramos but worried about how Ramos would react.

"The theory back then was, 'Let’s not infuriate him more than I have to.… The more you agitate this guy, the worse it’s gonna get,'" he told the Los Angeles Times.

"I remember at one point he was talking in a motion and somehow worked in how he wanted to smash Hartley’s face into the concrete," Shirley said. "We were concerned at the time. He was not stable."

On June 29, the day after the shooting, Ramos was charged with five counts of first-degree murder.

In the aftermath of the attack, Capital Gazette journalists worked with colleagues at the Sun to ensure that the next day's paper would still be published.

The June 29 edition of The Capital includes a front-page story about the shooting, bylined by 10 Capital reporters, and obituaries for all five of the people killed in the shooting. The opinion page of the paper is empty, except for a single message: "Today, we are speechless … Tomorrow this page will return to its steady purpose of offering our readers informed opinion about the world around them, that they might be better citizens."

A Maryland judge accepted a guilty plea on Oct. 28, 2019, in the murders of four journalists and a staffer at the Capital Gazette newsroom in Annapolis, the Associated Press reported.

Jarrod Ramos had initially pleaded not guilty and not criminally responsible by reason of insanity on 23 charges, including five counts of first-degree murder for the deaths of Gerald Fischman, Rob Hiaasen, John McNamara, Rebecca Smith and Wendi Winters on June 28, 2018.

The Capital Gazette reported that Baltimore Sun Media, which owns the newspaper, said in a statement that officials were “relieved” at the guilty plea.

Jury selection is scheduled to begin on Oct. 30 for hearings in the following weeks to determine whether Ramos will be held criminally responsible. 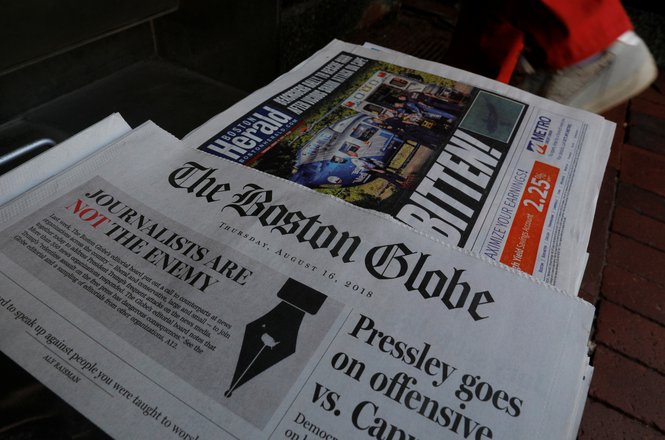 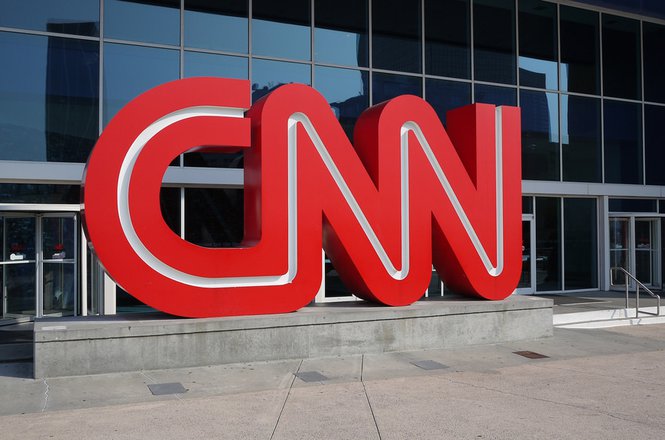 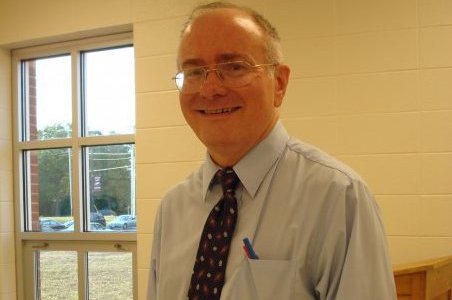 Randy Turner, a former newspaper reporter who now runs a blog called The Turner Report, was punched in the face …
More related incidents