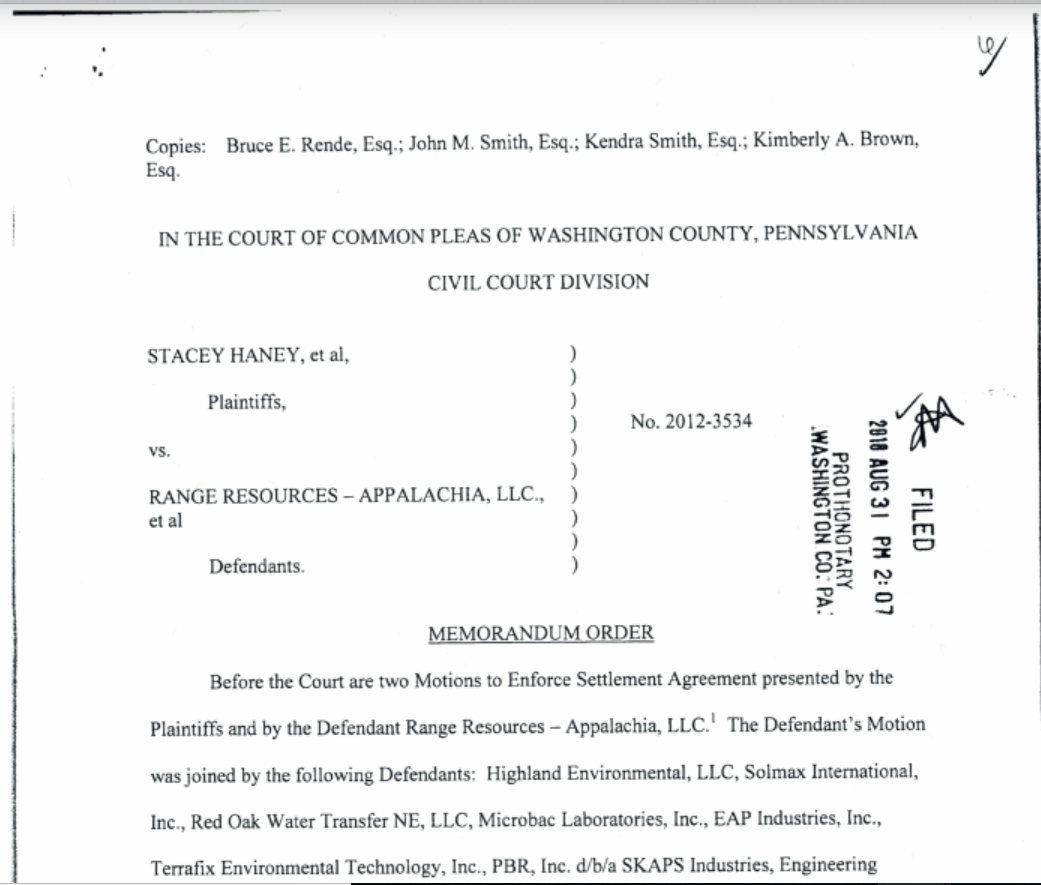 Reporter Reid Frazier was ordered to not publish the contents of this settlement agreement, which had been sealed but mistakenly made public.

A Pittsburgh-based reporter was ordered on May 30, 2019, not to publish details of a sealed settlement that he was mistakenly able to access. At a hearing on June 4, the order was vacated by Washington County Common Pleas President Judge Katherine Emery.

Range Resources Appalachia LLC had reached a settlement in August 2018 with families who alleged they had experienced serious health problems due to exposure to leaks, spills and air pollution emanating from a nearby Range well.

The settlement was sealed, only coming to the attention of the Pittsburgh Post-Gazette in January while reporting on a related story. Upon learning of the confidential settlement, the Post-Gazette filed a court action seeking to unseal it.

A hearing on the newspaper’s petition to intervene was scheduled for May 28, Post-Gazette reporter Don Hopey told the U.S. Press Freedom Tracker. “[Judge Emery] deferred ruling,” he said, “instead taking the case under advisement.”

Reid Frazier, a reporter for The Allegheny Front, StateImpact Pennsylvania and WESA 90.5, was in Washington, Pennsylvania, that day to cover the hearing. Hopey told the Tracker that in the course of conducting background research on the case, Frazier discovered the sealed settlement in the Washington County Prothonotary’s Public Case File Database.

County prothonotary Joy Ranko later told the Washington Observer-Reporter that the document was available due to a software glitch.

When Range lawyers became aware that Frazier had obtained the settlement and planned to air a story about it on May 30, they sent him a cease-and-desist letter and alerted the judge, the StateImpact reported. Emery issued an injunction barring Frazier, The Allegheny Front or StateImpact from “directly or indirectly publishing, circulating, disseminating, disclosing, describing, duplicating, or otherwise sharing in any way contents of the Sealed Documents.”

Frazier reported that at the June 4 hearing for the injunction, Range did not ask for a continuation of the order and told Emery it would publicly release the settlement terms. Emery vacated the injunction order.

Range Resources attorneys announced in court today that they will release terms of the Haney-Range settlement. Said they were seeking "peace".

In the course of the Post-Gazette petitioning to unseal the settlement, Range lawyers also attempted to subpoena and depose two reporters and an editor at the newspaper. In early May, Emery denied Range’s attempt to uncover sources and view confidential notes and documents, citing the state’s shield law.