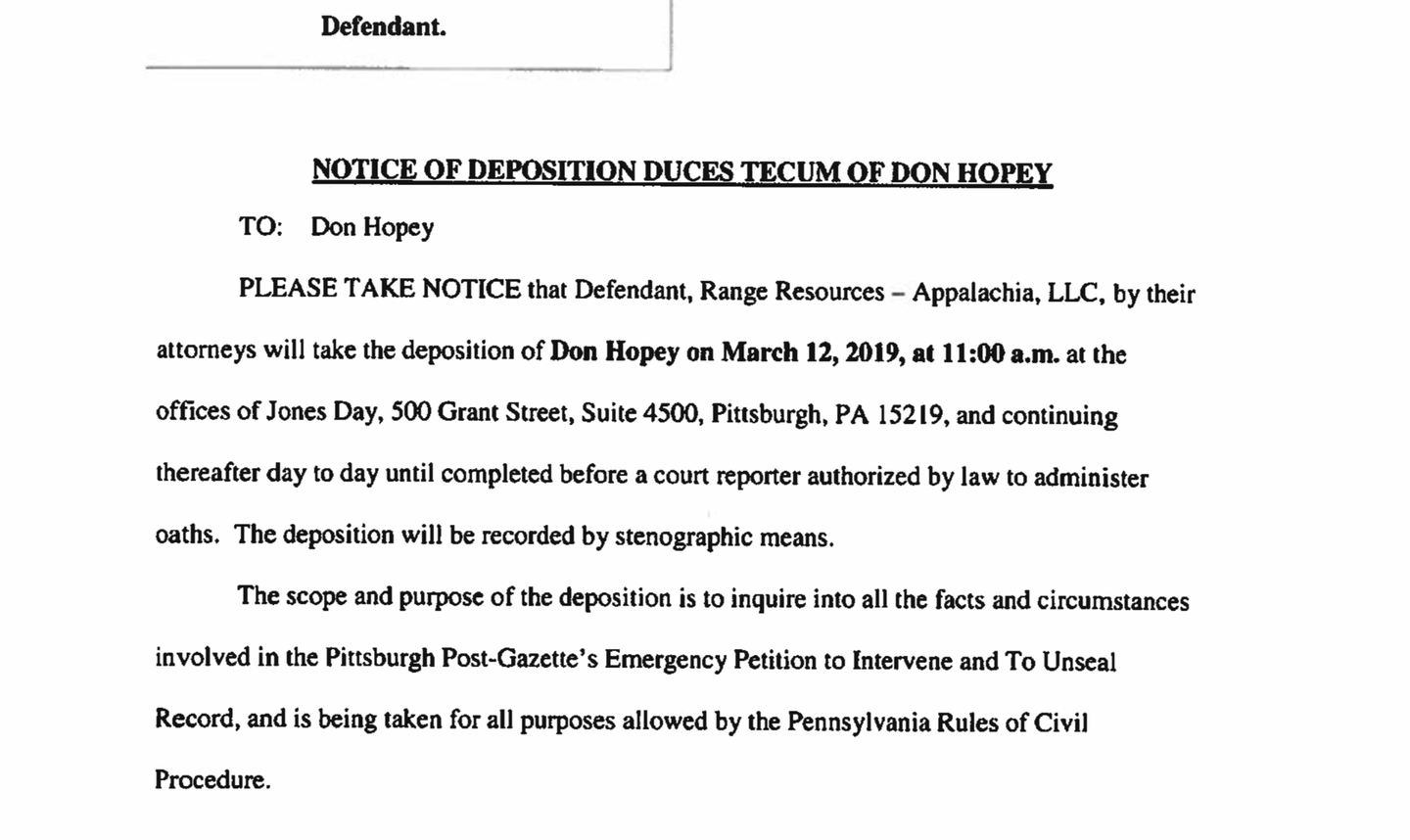 A notice of deposition to Pittsburgh Post-Gazette reporter Don Hopey, one of three people in the newsroom to receive deposition and subpoena orders for work product, stemming from the paper's request to unseal a private settlement.

A Pennsylvania judge denied a request by Range Resources Appalachia LLC on May 3, 2019, to subpoena and depose two Pittsburgh Post-Gazette reporters and a former editor who were attempting to unseal a private settlement against the gas drilling company.

Range reached a settlement in August 2018 with families who alleged they had experienced serious health problems due to exposure to leaks, spills and air pollution emanating from a nearby Range well.

The settlement was sealed, only coming to the attention of the Post-Gazette in late January of this year while reporting on a related story. Upon learning of the confidential settlement, the newspaper filed a court action seeking to unseal it. Range fought the petition to intervene, claiming that since the case was settled the request was no longer timely. According to the opinion filed by Washington County Common Pleas Court President Judge Katherine Emery in the case, Range also claimed the information was “being sought for an improper purpose.”

In mid-March, Range lawyers attempted to subpoena and depose former Post-Gazette Managing Editor Sally Stapleton and reporters Don Hopey and David Templeton to uncover the reporters’ sources and obtain their notes and documents related to the case, the Post-Gazette reported.

“The Shield Law must be liberally construed in favor of the news media,” Judge Emery wrote in her order and opinion. “Under this law, the employees of the newspaper cannot be required to disclose any information that could lead to the disclosure of their sources.”

The Post-Gazette also asked Emery to order Range to cover the newspaper’s legal fees in its motion to quash the subpoenas, alleging that they were “a brazen and legally abusive attempt to harass and intimidate the Post-Gazette.” Emery denied that request.

Pittsburgh-based reporter Reid Frazier was covering a hearing on the Post-Gazette’s petition to unseal the settlement when a software glitch granted him access to the document in question at the clerk’s office. When notified of this disclosure, Emery issued an injunction barring Frazier from directly or indirectly publishing the details of the settlement.

Frazier reported that at a June 4 hearing, Range did not ask for a continuation of the injunction order and told Emery it would publicly release the settlement terms, effectively ending the Post-Gazette’s court action to unseal it and the prior restraint injunction against Frazier.

Kristin Baver and John-Erik Koslosky, reporters for the Press Enterprise newspaper in Bloomsburg, Pennsylvania, were subpoenaed in May 2018 to give testimony in the murder trial of Anthony “Rocco” Franklin. Centre County senior judge David Grine quashed both subpoenas on May 24, 2018.Franklin is currently on trial for the 2012 murder of his former son-in-law, Frank Spencer. He fled to Argentina but was arrested by Argentinian authorities, before being extradited to the United States on April 12, 2017. Baver and …

Francis Scarcella — a reporter for The Daily Item newspaper in Bloomsburg, Pennsylvania — was subpoenaed to testify in the murder trial of Anthony “Rocco” Franklin, in May 2018. A hearing on the subpoena was held on May 22, 2018, and a judge quashed the subpoena two days later.Franklin is currently on trial for the 2012 murder of his former son-in-law, Frank Spencer. He fled to Argentina but was arrested by Argentinian authorities, before being extradited to the United States …
More related incidents