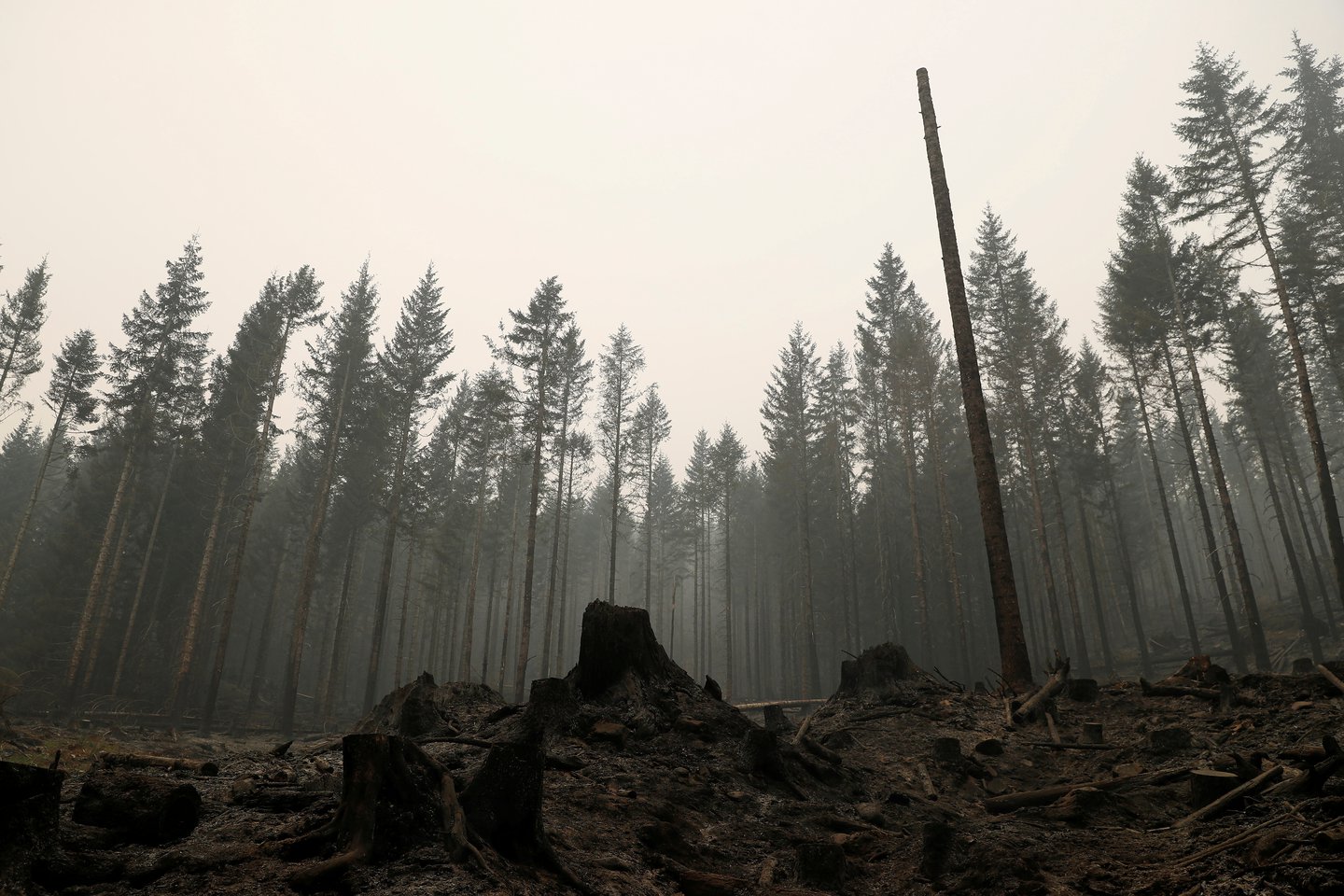 A fire-damaged forest in Estacada, Oregon in September 2020.

Freelance photojournalist Nathan Howard encountered a hostile group of armed individuals on Sept. 10, 2020, while reporting on forest fires in Estacada, Oregon, a city about 30 miles southeast of downtown Portland, he told the Committee to Protect Journalists in a phone interview.

Howard, who was on assignment for Getty Images, said that he had pulled up to a house that had clearly been evacuated, in order to take pictures. After he parked, a blue pickup truck pulled up, a man got out and Howard said he told the man who he was and showed his press pass, issued by the National Press Photographers Association.

“I thought he was a volunteer firefighter, and that he was angry I was working in an evacuation zone,” Howard told CPJ, a founding partner of the U.S. Press Freedom Tracker. At the time, there was a level three evacuation order in effect for the area. The man who came out of the truck asked Howard why he had Washington license plates, the journalist said.

Howard speculated that the man may have believed he was a looter. “At that point in time, I didn’t need to be there anyway. I said there was a misunderstanding, and I said I’d leave,” Howard told CPJ.

The man then spoke into his lapel, as if he had a mic on, and read Howard’s license plate number, the journalist said; after that, he told Howard that he needed to go, stating that he had “boys coming.”

Howard said he left and noticed that the man followed in his own truck, tailgating Howard for five miles before a white pickup truck pulled up perpendicular to Howard.

“The guy in the white pickup truck got out with an assault rifle and his finger was on the trigger. I didn’t feel like they ever wanted to hurt me, they just wanted to intimidate me,” Howard said.

The man from the white pickup truck asked Howard what he was doing, and the photojournalist replied that he was working. Within a couple of minutes another truck arrived. A man got out of the third truck, examined Howard’s credentials and cameras and told him to photograph evacuation on the main roads, Howard said.

“One of them told me, ‘If we see you up here again, we’re going to put you in a ditch,’” Howard said.

In a separate incident, Alissa Azar told CPJ that she encountered a group of armed men while she was out reporting on the same fires around Molalla, a town 30 miles south of Portland, with colleagues Justin Yau, a freelancer, and Sergio Olmos, who works for Oregon Public Broadcasting.

Azar, a freelance photojournalist, said she was trying to get a good shot when she noticed three men who each carried a rifle and had a handgun at his waist. During their conversation with Azar, Yau and Olmos, two of the men put their rifles away in their vehicle, according to Azar.

Azar said the men wanted to know why the journalists were there taking pictures. The journalists showed their press credentials and offered to show their work to the men.

“They told us to just get the fuck out of there to avoid any problems or further confrontation with them,” Azar said. The three photojournalists got in their car and drove away, with the men filming their faces and car.

KATU ABC 2 reporter Genevieve Reaume was assaulted and had her phone smashed by individuals participating in an eviction protest in Portland, Oregon, on Dec. 8, 2020.Reaume and KATU ABC 2 photojournalist Ric Peavyhouse were covering a protest against the feared eviction of a Black and Indigenous family from their foreclosed home in North Portland. Activists had been camping out at the property on North Mississippi Avenue — known as the “Red House” — for months when law enforcement came …

Three journalists were shoved by pro-Donald Trump demonstrators while covering a rally in Salem, Oregon, on Nov. 7, 2020.Documentary photographer Joseph Rushmore and two members of the Portland-based press collective 45th Absurdist Brigade, who requested anonymity because they fear harassment from far-right groups, were pushed while covering one of the “Stop the Steal” rallies held around the country to promote President Trump’s baseless claims that the 2020 presidential election was stolen from him.In the wake of the election being called …

Two independent journalists said they were pushed by law enforcement officers in separate incidents while covering demonstrations in Portland, Oregon, on Nov. 4, 2020.Garrison Davis and Bethany Kerley were documenting two protests. One group was calling for every vote cast in the U.S. presidential election to be counted, while another expressed a combination of dismay with the electoral system and support for the Black Lives Matter movement. Protests had been held in Portland on almost a nightly basis since the …
More related incidents