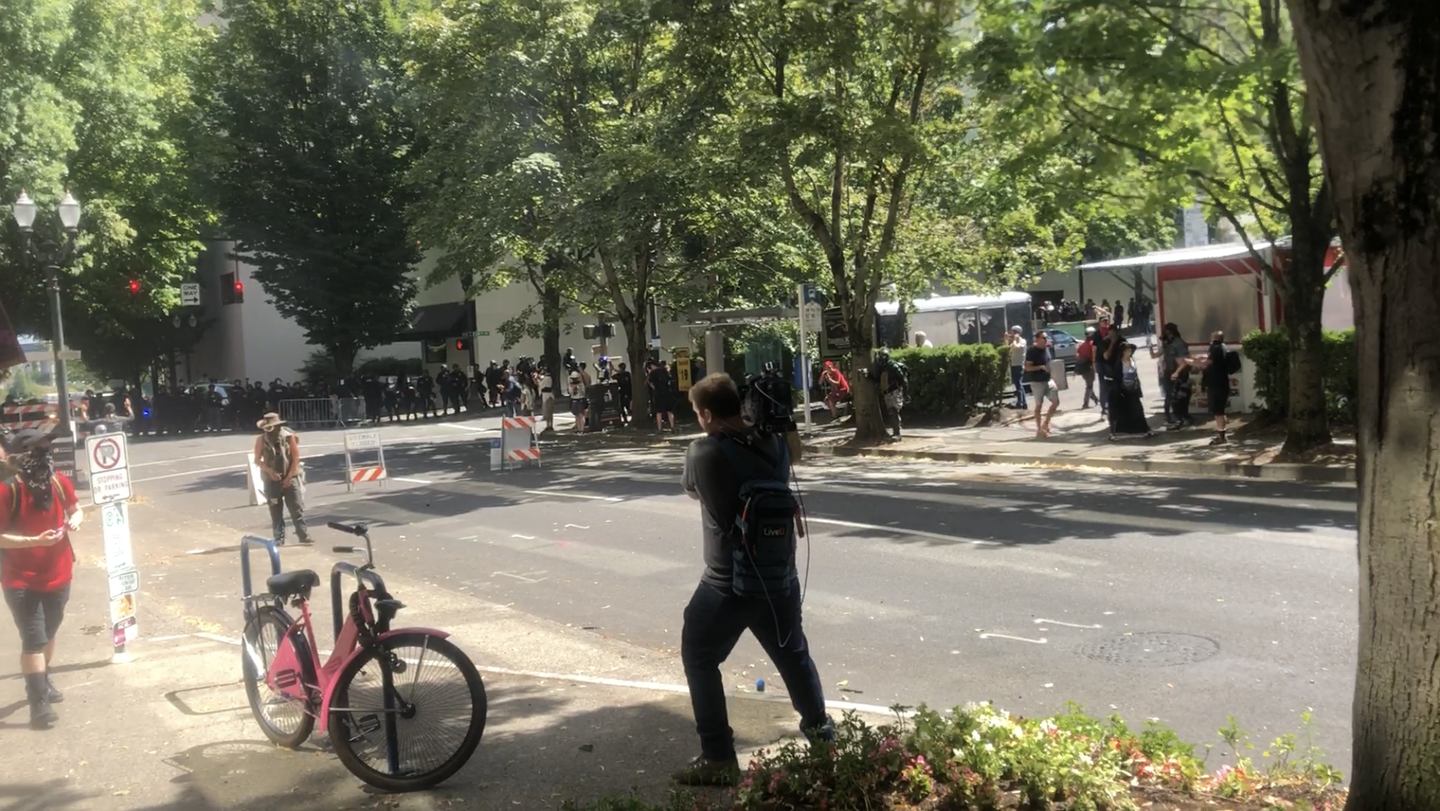 Ric Peavyhouse, a photojournalist for Portland TV station KATU, was struck by a blue foam-tipped round fired by police officers on August 4, 2018.

Police shoot TV photojournalist with ‘less-lethal’ round at Portland protest

Ric Peavyhouse, a photojournalist with local TV station KATU, was filming a protest in Portland, Oregon, on Aug. 4, 2018, when a police officer shot him in the leg with a "less-lethal" foam-tipped round.

Mike Bivins, a freelance reporter who covers the city, was standing a short distance away from Peavyhouse and captured video of the sponge round striking him. He later posted the video on Twitter.

Here’s video of @KATUNews photojournalist @RPeavyhouse taking a police less-lethal weapon like a champ during the Aug 4 Patriot Prayer rally and counterprotest pic.twitter.com/m1w8DPndGL

The video shows a small number of protesters in front of a line of Portland police officers. Peavyhouse is standing on the side of the street, holding a big TV camera on his shoulders and filming the line of police and the protesters.

In the video, police officer issues a dispersal order over a loudspeaker.

Suddenly, a small blue projectile — likely a 40mm plastic round with a blue foam tip — strikes Peavyhouse in his right thigh. He clutches his leg, turns around, and stumbles out of frame.

In an interview with KATU, Peavyhouse described being struck by the less-lethal round.

"Then I hear a tat-tat-tat-tat," he said. "A split second later, I feel like a crack on my leg, feels like a baseball bat hitting your thigh."

Peavyhouse tweeted that the 40mm sponge round left a large bruise on his thigh and made it painful for him to walk.

Last protest injury update: got checked out by a doctor. Bruise gets nastier by the hour. Hurts to walk a little, but doctor says to just take it easy.
Hit by one of the larger “less lethal impact rounds” used by @PortlandPolice yesterday #LiveOnK2 pic.twitter.com/tLd9GbjPyx 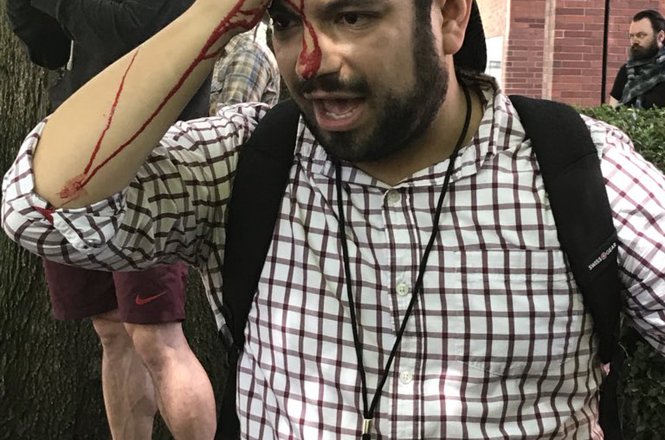 Eder Campuzano, a reporter at The Oregonian, was hit in the head by a plastic water bottle while covering protests … 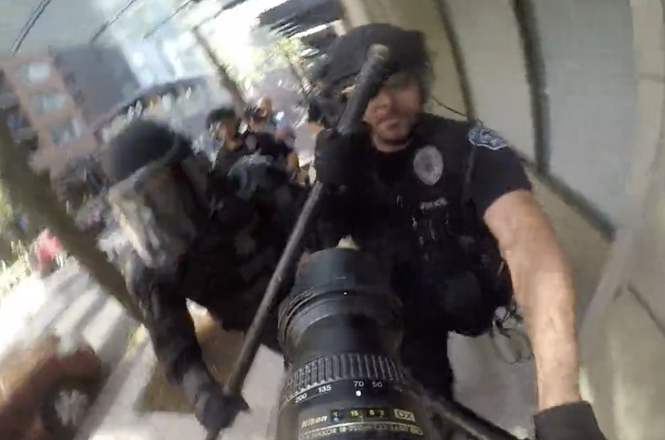 Freelance photographer Doug Brown and independent journalist Donovan Farley were shoved by Portland police officers while covering a protest in Portland, Oregon, on Aug. 4, 2018.The journalists were in downtown Portland that day to cover the far-right "Patriot Prayer" protest and counter-protests for Paste magazine. Brown was taking photographs of protesters and Portland police officers, who were clad in riot gear and armed with batons and non-lethal weapons.A video that Brown posted on Vimeo shows journalists and protesters slowly retreating …

Portland Mercury reporter Kelly Kenoyer was shoved while covering a far right rally in Portland, Oregon, on June 3, 2018.“It was a scary experience—the first violent protest I've covered, and I had a bit of that violence directed at me,” she wrote in a piece for Portland Mercury.Kenoyer told Freedom of the Press Foundation that she began covering the Patriot Prayer rally around 4 p.m., at which point there were around 20 people aligned with the far-right Patriot Prayer group …
More related incidents