Kristin Baver and John-Erik Koslosky, reporters for the Press Enterprise newspaper in Bloomsburg, Pennsylvania, were subpoenaed in May 2018 to give testimony in the murder trial of Anthony “Rocco” Franklin. Centre County senior judge David Grine quashed both subpoenas on May 24, 2018.

Franklin is currently on trial for the 2012 murder of his former son-in-law, Frank Spencer. He fled to Argentina but was arrested by Argentinian authorities, before being extradited to the United States on April 12, 2017. Baver and Koslosky interviewed Franklin over the phone while he was imprisoned in Argentina, and the Press Enterprise published an article based on the interview. Another local newspaper, The Daily Item, also conducted a jailhouse interview with Franklin over the phone.

State prosecutors subpoenaed Baver and Koslosky, as well as a reporter from The Daily Item, to testify about what Franklin told them during the interviews. The three reporters successfully fought the subpoenas, convincing judge Grine that the prosecution did not need their testimony to make its case.

Francis Scarcella — a reporter for The Daily Item newspaper in Bloomsburg, Pennsylvania — was subpoenaed to testify in the murder trial of Anthony “Rocco” Franklin, in May 2018. A hearing on the subpoena was held on May 22, 2018, and a judge quashed the subpoena two days later.Franklin is currently on trial for the 2012 murder of his former son-in-law, Frank Spencer. He fled to Argentina but was arrested by Argentinian authorities, before being extradited to the United States … 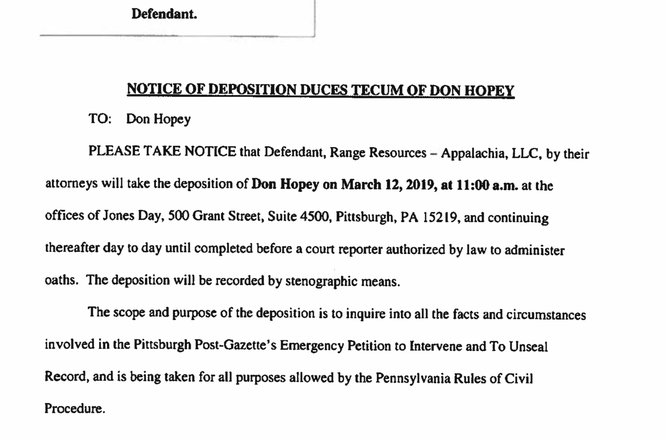 A Pennsylvania judge denied a request by Range Resources Appalachia LLC on May 3, 2019, to subpoena and depose two …
More related incidents