On the evening of Nov. 7, 2018, a group of anti-fascist protesters staged a demonstration outside the Washington, D.C., home of Tucker Carlson, a controversial Fox News host whose talk show has been accused of normalizing white nationalist ideas.

Carlson was not home at the time of the demonstration, which began around 8 p.m., but his wife was. The Washington Post reports that the protesters repeatedly banged on the Carlsons' door, prompting Carlson's wife to fear for her safety. After locking herself in a pantry, she called the police.

Protesters affiliated with the group have previously confronted politicians and public figures — including Carlson — in public spaces, but this is the first time that the group has staged a demonstration outside Carlson's private home.

In one of the now-deleted videos posted by Smash Racism DC, a protester can be heard over a bullhorn saying, "Tucker Carlson, we are outside your home." The protester goes on to accuse Carlson of "promoting an ideology that has led to thousands of people dying at the hands of the police [and] trans women being murdered in the streets."

The protesters then break out into a chant: "Tucker Carlson, we will fight! We know where you sleep at night!"

The Post reports that during the demonstration, one of the protesters mentioned that she wanted to bring a "pipe bomb" to Carlson — a reference to Cesar Sayoc, the Trump supporter who sent pipe bombs to prominent critics of the president.

The Post also reports that Smash Racism DC tweeted out Carlson's home address and published a Facebook post encouraging people to go to his home and confront him.

Carlson said that he was especially concerned about the protester's reference to pipe bombs.

"If they’re talking about pipe bombs … how do you live like that?" he said. "I probably won’t open another package sent to our house from now on."

Carlson also told the Post that one protester threw himself into the door, breaking it — an accusation that the protesters deny.

Alex Rubinstein, an independent journalist who contributes to RT and Sputnik, tweeted a photo of the door, which one of the protesters sent to him. He also tweeted a statement from the protesters defending the action against Carlson.

Tucker Carlson has said that activists put a crack in his front door. Organizers sent me this photo as evidence they did not damage his door.

Here is a statement sent to me from one of the Smash Racism DC organizers involved in the protest at Tucker Carlson's home last night pic.twitter.com/SDkWCiSQjF

The Associated Press reports that D.C.'s Metropolitan Police Department is treating the incident as a "suspected hate crime" motivated by "anti-political" bias. The District of Columbia defines a hate crime as a crime "that demonstrates an accused’s prejudice based on the actual or perceived race, color, religion, national origin, sex, age, marital status, personal appearance, sexual orientation, gender identity or expression, family responsibility, homelessness, physical disability, matriculation, or political affiliation of a victim.”

According to the AP, the officers who responded the incident did not arrest any protesters but did confiscate a number of signs. An MPD police report on the incident does not mention any damage to Carlson's door but does note that protesters vandalized his property by spray-painting an anarchist symbol on his driveway.

In a statement sent to multiple media organizations, MPD said that it had opened a criminal investigation into the incident:

We welcome those who come here to exercise their First Amendment rights in a safe and peaceful manner. However, we prohibit them from breaking the law. Last night, a group of protestors broke the law by defacing private property at a Northwest DC residence. MPD takes these violations seriously, and we will work to hold those accountable for their unlawful actions. There is currently an open criminal investigation regarding this matter.

The incident that took place at Tucker's home last night was reprehensible. The violent threats and intimidation tactics toward him and his family are completely unacceptable. We as a nation have become far too intolerant of different points of view. Recent events across our country clearly highlight the need for a more civil, respectful, and inclusive national conversation. Those of us in the media and in politics bear a special obligation to all Americans, to find common ground. 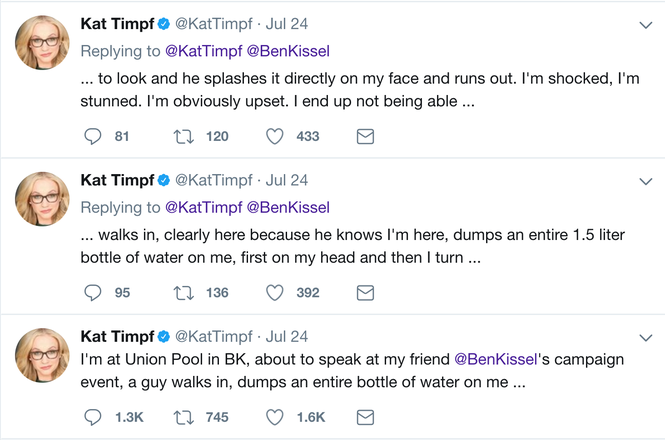 Katherine Timpf, a co-host on the show "Fox News Specialists" and a reporter for National Review Online, said that she … 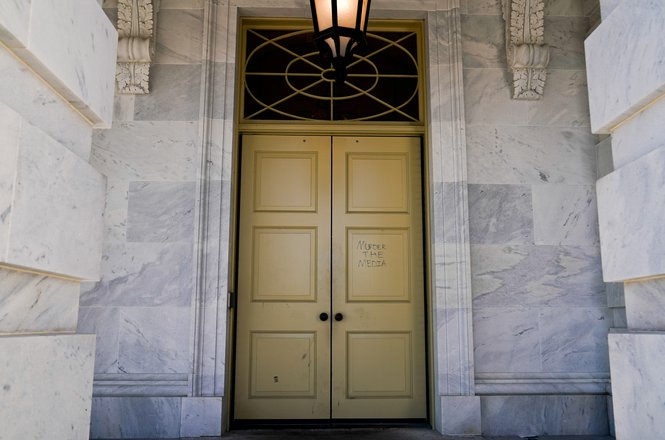 On Jan. 6, 2021, after a rally outside the White House in which President Donald Trump urged supporters to march …

Reporters chased out of Washington, D.C.’s Lafayette Park by officers in riot gear

Secret Service agents and U.S. Park Police chased two journalists out of Washington, D.C.’s Lafayette Park in the early morning hours of May 30, 2020, minutes after the journalists were caught in a cloud of pepper spray, video footage of the incident shows.At 3:22 a.m, officers in riot gear with the Secret Service and the U.S. Park Police sprayed pepper spray toward a crowd of protesters as they attempted to clear the park across from the White House, according to …
More related incidents