A portion of the subpoena demanding raw photos and videos captured by five Seattle-area media outlets during a protest on May 30, 2020.

The Seattle Police Department issued a subpoena to the five largest media organizations in the metro area on June 18, 2020, requesting that each outlet turn over raw photos and video captured during one day of demonstrations.

Protests against police violence have taken place in more than 70 cities across the country, sparked by a video showing a Minneapolis police officer kneeling on the neck of George Floyd, a Black man, during an arrest on May 25. Floyd was later pronounced dead at a hospital.

In the days following Floyd’s death, Seattle saw both peaceful and violent protests, with Saturday, May 30, being especially turbulent: The Seattle Times reported that 27 people were arrested that day, multiple police vehicles were damaged and burned, stores were looted and police deployed tear gas and other projectiles on protesters.

The legal filing ordered the five outlets — KIRO 7 News, KING 5 News, KOMO 4 News, KCPQ News and the Times — to appear for a hearing on June 29 with all video footage and photographs taken on May 30 from 3:30-5 p.m. within a four block radius.

Representatives from the outlets did not immediately respond to emailed requests for comment.

According to the subpoena, the police are seeking the images to aid in an ongoing investigation to identify multiple individuals who allegedly stole firearms from police vehicles and one who allegedly committed multiple arsons within that area.

In an affidavit filed with the subpoena, Detective Michael Magan said that four rifles and a semi-automatic pistol were stolen from unmarked vehicles on 6th Avenue, and that six SPD vehicles were “heavily damaged by vandals” and set on fire.

Three of the rifles were recovered that day, two of them with the help of an armed security guard for Fox affiliate KCPQ, Magan said in the affidavit. He added that the other two weapons remained unaccounted for.

On June 29, the outlets filed a joint brief objecting to the subpoena and requesting that it be quashed. In the brief, they argue that the subpoena not only violates the First Amendment and the Washington state shield law, but is also overly broad and places an undue burden on the outlets.

“SPD, acting through outside counsel, has targeted Seattle’s five largest news outlets with an expansive demand for vast amounts of unaired news footage and unpublished news photographs,” Eric Stahl, lawyer for the outlets, wrote in the brief. “The Subpoena is a procedurally irregular, overbroad and impermissible assault on the independence of the press.”

In an amicus brief filed the same day, the Reporters Committee for Freedom of the Press highlighted the dangers of degrading the public’s perception of the media as independent from the government, especially law enforcement.

“Enforcement of the Subpoena could mislead the public into perceiving reporters at protests as a mere arm of law enforcement,” RCFP’s brief states, “thus eroding public trust in the news media and increasing the already-significant risk of physical harm that journalists face when covering protests.”

RCFP, a partner of the U.S. Press Freedom Tracker, highlighted the recent case of Arizona journalist Eric Rosenwald, who was repeatedly pushed, punched and kicked by individuals at a demonstration in Tucson who accused him of being “with the police.”

Similarly, the Times reported that one of the outlet’s photographers was punched in the face by an individual at a recent protest, and that newspaper staff members have had to repeatedly explain that they are independent.

As of press time, the judge had not responded to the outlets’ request to quash the subpoena.

Brain Esler, an outside attorney representing the police department, told the Times that no actions will be taken to enforce the subpoena until a July 16 Superior Court hearing and subsequent ruling. Esler did not respond to the Tracker’s emailed request for comment.

A judge ruled on July 23, 2020, that five Seattle-area news outlets will have to comply with a subpoena ordering them to turn over raw footage and photos to the Seattle Police Department.

Lee placed some limits on the subpoena, the Times reported. Police will only be able to use the images to identify suspects in the open arson and gun theft investigations cited in Detective Michael Magan’s affidavit and only images captured by professional camera equipment — not reporter’s cell phones — will be subject to the subpoena.

Times Executive Editor Michele Matassa Flores said that the newspaper strongly opposes the subpoena as “it puts our independence, and even our staff’s physical safety, at risk.”

“The media exist in large part to hold governments, including law enforcement agencies, accountable to the public,” Matassa Flores said. “We don’t work in concert with government, and it’s important to our credibility and effectiveness to retain our independence from those we cover.”

Attorney Eric Stahl, who is representing the media companies, told the Times that the outlets have not yet decided whether they will file an appeal.

Lee is expected to enter a final order at a telephonic hearing on July 30.

SPD filed the subpoena in June, stating that it sought images that might help detectives identify suspects believed to have been involved in the theft of firearms from police vehicles and multiple arson incidents during protests on May 30. In July, a judge ruled that the outlets — KIRO 7 News, KING 5 News, KOMO 4 News, KCPQ 13 News and The Seattle Times — would have to comply with the subpoena.

According to SPD’s motion to dismiss, an ongoing appeal filed by the outlets would delay the release of the requested images until well into 2021. Additionally, the motion noted that one of the suspects had been arrested on Sept. 4. As a result, the department said that it had decided to withdraw the subpoena.

“As SPD will not be seeking enforcement and the appellants News Media have not and will not be required to produce anything, there is nothing for this Court to review, the appeal is now moot and it should be dismissed,” attorney for the department Brian Esler wrote in the motion.

Seattle City Attorney Pete Holmes said in a statement that the urgency of the subpoena’s aims had “collided” with the lumbering and slow aspects of the judicial process, and that “the process won out.”

The Times reported that Eric Stahl, attorney for the five media outlets, countered that what Holmes was “calling a ‘process’ is actually an important protection for journalism, free speech and the public’s right to know.”

“And fortunately in this case, the process worked,” Stahl said. 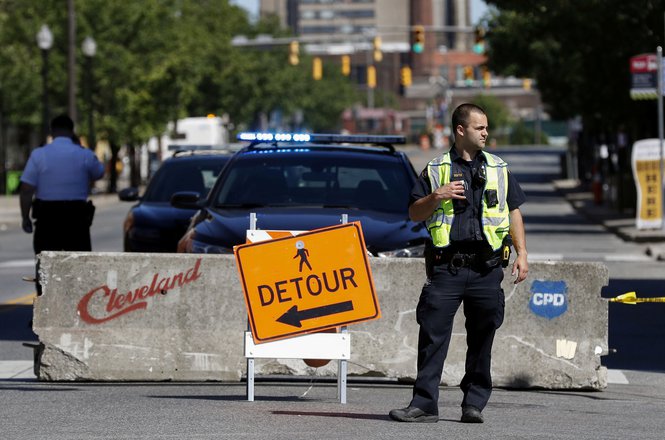 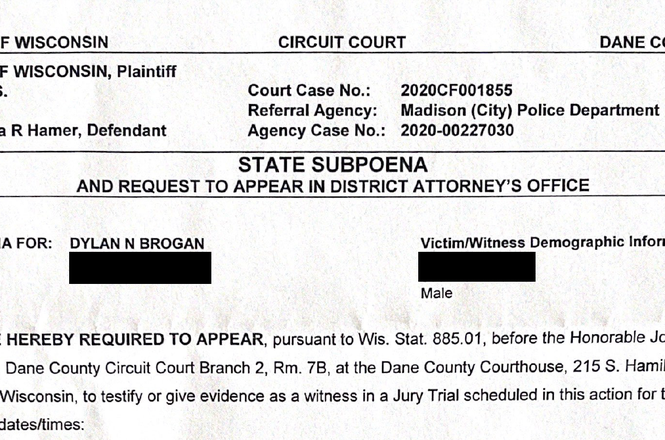 Dylan Brogan, the senior reporter at the digital outlet Isthmus, was one of three journalists subpoenaed on Aug. 5, 2021, …
More related incidents