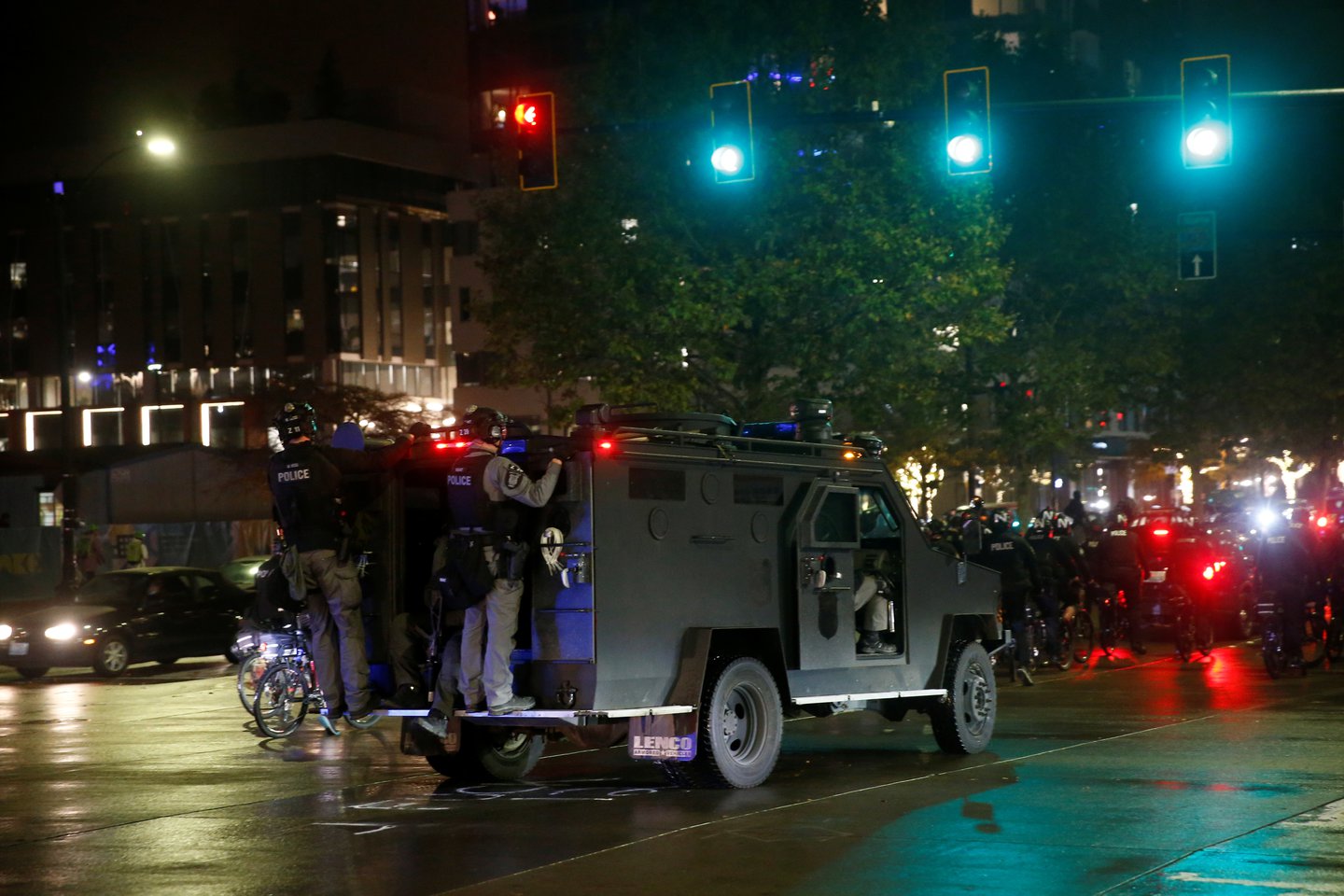 The Seattle Police Department responds to a protest march on Election Day in Seattle.

Shauna Sowersby, a freelance reporter in Seattle, told the U.S. Press Freedom Tracker that she was pushed off the sidewalk by a police officer while attempting to film an arrest during an election night protest in the city.

Protests were held across the county on and around Nov. 3, 2020, Election Day in the United States. Sowersby began covering protests in Seattle at around 6:45 p.m. on election night. The journalist, who said she wasn’t reporting for a particular news outlet at the time, said two separate protest groups — an election-related group and a Black Lives Matter group — had joined together, and she was following those focused on the elections. The Seattle Police Department issued dispersal orders and made at least eight arrests during the protest, according to The Seattle Times.

Sowersby, whose work has been published in Crosscut, an online news service focused on the Pacific Northwest, and The Idaho Statesman, posted on Twitter throughout the evening. Her tweets showed dozens of bicycle cops and at least one armored vehicle following protesters.

At 11:56 p.m., Sowersby tweeted a video with the caption: “SPD bike officers now rushing protestors and press. Cop behind me almost went out of his way to shove me off the sidewalk. LRAD then tells protestors they are here to support everyone’s right to protest. #seattleprotest”

SPD bike officers now rushing protestors and press. Cop behind me almost went out of his way to shove me off the sidewalk. LRAD then tells protestors they are here to support everyone’s right to protest. #seattleprotest pic.twitter.com/sQk7rz434C

Sowersby was attempting to film an arrest using her phone when a police officer “just barrelled through me” from behind, she told the Tracker in a phone interview two days later. Sowersby spent the summer reporting on protests against police brutality in Seattle and Portland, Oregon; in Portland, press stayed on the sidewalk, she said, so she did the same thing in Seattle. The officer shoved her for a “good four to five seconds,” she estimates.

“I was shocked, it took me by surprise,” Sowersby said. “My friend tried to take a video of it happening [and] says it looked like he was going out of his way to push me. [The police] were barrelling through the press on the sidewalk.”

At the time she was shoved, Sowersby had “Press” marked on her body, including on the bulletproof vest she was wearing. She was not wearing physical press credentials.

Sowersby said she doesn’t believe she was targeted as a member of the press, but did not report it to the police because incidents of police aggression against her while reporting on protests since the summer “have happened so many times at this point it doesn’t even seem like it’s worth the effort.”

The Seattle Police Department did not respond to a phone message requesting comment.

Journalist accosted by person in ‘black bloc’ during Election Day protest in D.C.