Two Tennessee-based reporters, including a photographer from Chattanooga’s WRCBtv who asked not to be identified, were told to leave and threatened with arrest after one of them tried to ask a question at a town hall meeting with U.S. Rep. Marjorie Taylor Greene on Jan. 27, 2021.

The WRCB photographer, who was reporting with WRCB reporter Meredith Aldis, was among journalists invited to Greene’s town hall in Whitfield County, Georgia, about 30 miles southeast of Chattanooga. Upon arrival at the event, journalists were told they could not ask questions or speak to anyone in attendance, WRCB News Director Callie Starnes told the U.S. Press Freedom Tracker.

“If WRCB knew that ahead of time, we would have opted not to cover the event,” Starnes said. “WRCB did not agree to those terms.”

The photographer was ejected after Aldis attempted to ask Greene, a Georgia Republican, about criticism of social media posts she had made before her election to Congress, including Facebook posts in which she advocated conspiracy theories and appeared to support execution of some Democratic political leaders. In other screenshots, posted by Media Matters for America, Greene agreed with a Facebook comment that the 2018 school killings in Parkland, Florida, were a “false flag,” or a staged event.

After she was sworn in to Congress in early 2021, the revelations prompted calls from other members to expel Greene; on Feb. 4 the House voted to strip Greene of her congressional committee assignments.

In a video clip of the Jan. 27 town hall, WRCB reporter Aldis can be heard attempting to ask the representative a question, when Greene replies “I am talking to my constituents.”

The station reported that a member of Greene’s staff then approached Aldis and told her to leave the town hall. The staffer waved over a member of the Whitfield County (GA) Deputy Sheriff’s office, who threatened to arrest the journalists, according to the station’s report. Both the photographer and Aldis were escorted out of the town hall meeting.

The station said that following the incident, a representative from Greene’s staff reached out to WRCB and said the town hall "was not a press conference" and the question had caused a “disruption.”

In an interview with the television station, Whitfield County Sheriff Scott Chitwood defended the actions of his deputies who had threatened the reporters with arrest. He said Greene's staff had instructed his deputies to remove any member of the media who attempted to talk to anyone or ask a question.

Greene’s office had not responded to a Tracker request for comment as of press time.

A Tennessee-based journalists from Chattanooga’s WRCBtv was told to leave and threatened with arrest after trying to ask a question at a town hall meeting with U.S. Rep. Marjorie Taylor Greene on Jan. 27, 2021.WRCB reporter Meredith Aldis was among a group of journalists invited to Greene’s town hall in Whitfield County, Georgia, about 30 miles southeast of Chattanooga. Upon arrival at the event, journalists were told they could not ask questions or speak to anyone in attendance, WRCB News … 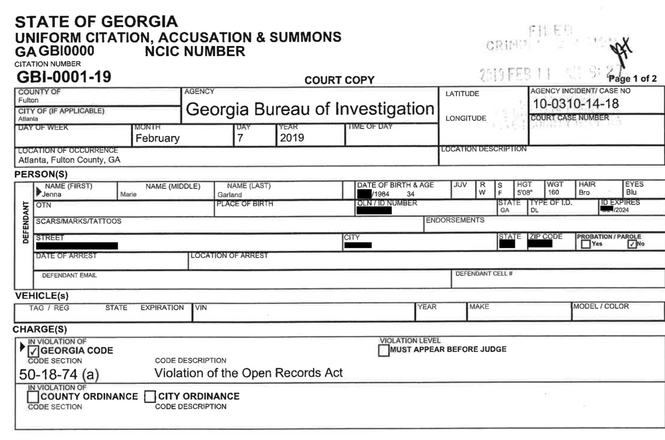