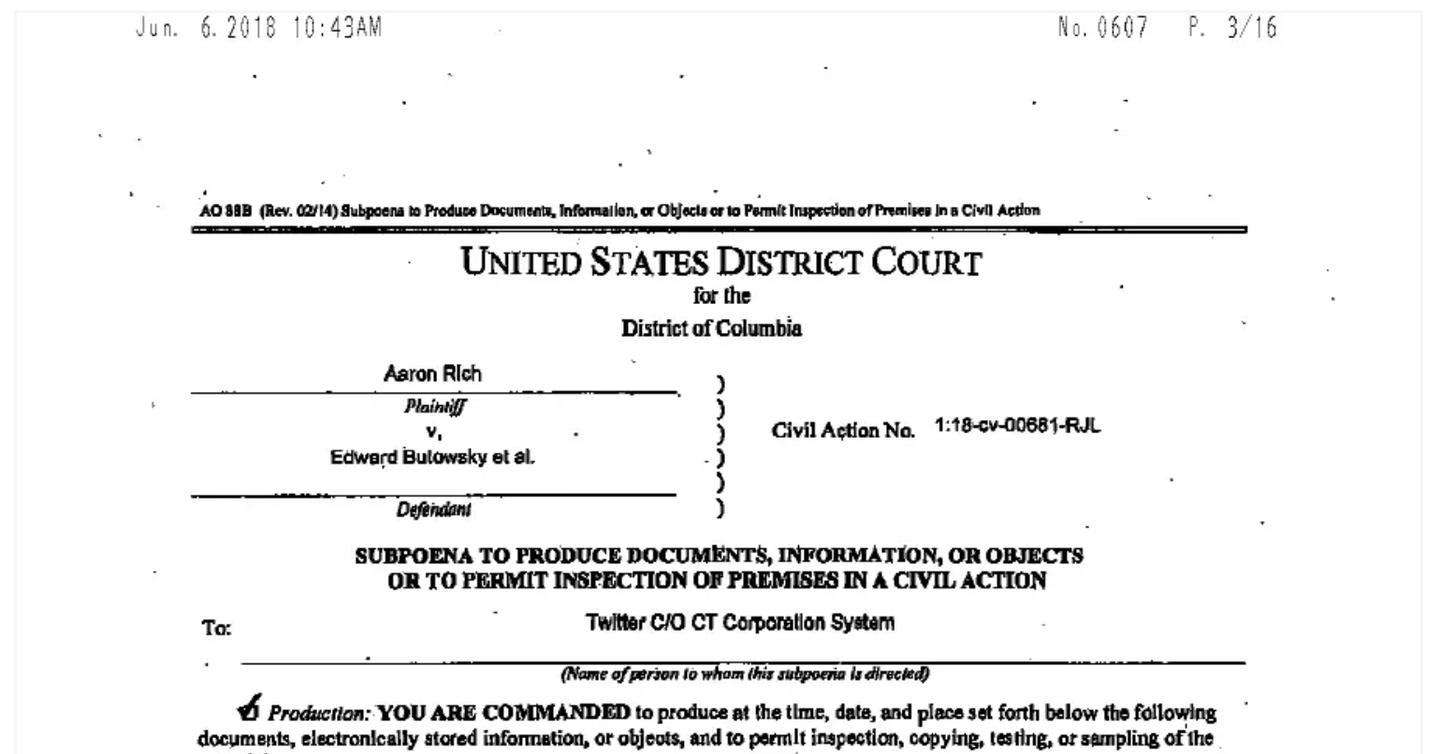 Aaron Rich named Texas businessman Ed Butowsky, America First Media Group and its founder Matt Couch and The Washington Times newspaper in the March 2018 lawsuit, following debunked reports that Seth Rich had been involved with the 2016 DNC email leaks prior to his death.

Filed on June 6, 2018, the subpoena commands Twitter to produce account data, documents and communications concerning Seth Rich or his family, the DNC, the defendants, and individuals, outlets and phrases connected with the alleged defamatory reporting from identified “primary” and “secondary” accounts. The list of primary accounts, which predominantly consists of the defendants, also includes The Gateway Pundit and its reporter Cassandra Fairbanks, and WikiLeaks and its founder Julian Assange. The secondary accounts are all those that interacted with the primary accounts via tweet, re-tweet, direct message or reply from Jan. 1, 2015, to the date of the subpoena.

Twitter was initially given until June 15 to produce all responsive documents. The Gateway Pundit reported that Twitter sent letters notifying accounts implicated in the subpoena.

Reporter Fairbanks told Law & Crime the subpoena was a “gross and far reaching violation of privacy.”

It is unclear whether Twitter turned over documents or communications in accordance with the subpoena or a court order, and Twitter declined to comment on whether it opposed the subpoena. The social media company has objected to similar subpoenas in other instances.

On March 29, 2021, the defamation suit brought by Aaron Rich — brother of murdered Democratic National Committee staffer Seth Rich — was terminated when he reached a settlement agreement with Texas businessman and then-frequent Fox News guest Ed Butowsky. Rich had already agreed to a settlement with defendants America First Media Group and its founder Matthew Couch in January 2021.

Rich filed the suit on March 26, 2018, alleging that the defendants had falsely linked him and his brother to a DNC email dump to WikiLeaks and had exhibited a “reckless disregard for the truth.”

Rich issued a subpoena to Twitter on June 8, 2018, ordering to social media company to produce account data, documents and communications concerning Seth Rich or his family, the DNC, the defendants, and individuals, outlets and phrases connected with the alleged defamatory reporting from identified “primary” and “secondary” accounts.

In February 2020, Twitter declined to comment on whether it opposed the subpoena or turned over the requested documents. The social media company has objected to similar subpoenas in other instances.

With the case closed, any outstanding subpoenas would become moot. Therefore, the Tracker is listing the status of the subpoena as “unknown” until further confirmation is available. 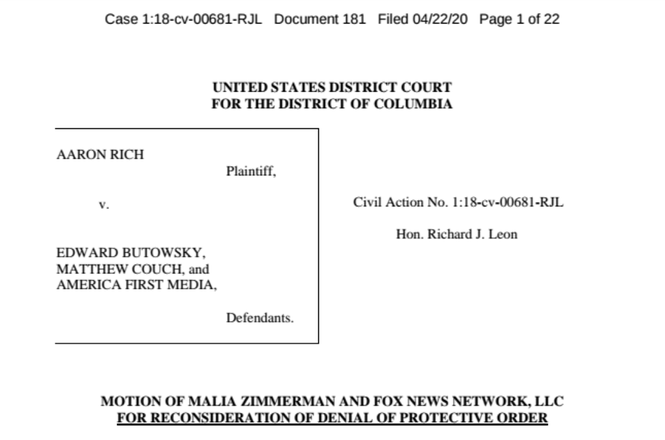 Fox News journalist Malia Zimmerman was subpoenaed on Jan. 7, 2020, to testify about a 2017 article and her communications …
More related incidents