Two journalists were assaulted by an individual while documenting an anti-lockdown protest at the Oregon Capitol in Salem on Dec. 21, 2020.

KGW8 reported that far-right group Patriot Prayer had organized the demonstration at the Capitol, where lawmakers had convened for a special one-day session to address bills related to COVID-19 and wildfire relief.

Oregon Public Broadcasting reporter Sergio Olmos tweeted at 1:15 p.m. that police had already declared it an unlawful assembly and officers in riot gear were stationing themselves about a block from the Capitol. Olmos, who declined the U.S. Press Freedom Tracker’s request for comment, posted pictures and videos in subsequent tweets showing individuals gathered around the building’s west-side entrance. Some can be seen using poles and their legs to break a pair of glass doors.

Brian Hayes, a photojournalist for the Statesman Journal, told the Tracker that he’d been taking photos of this scene shortly before 1:30 p.m. when one of the men — whom Hayes identified as Albany resident Jeremy Roberts — noticed him.

Hayes said that Roberts had grabbed a 10-pound weight being used to hold down a tent outside the Capitol and was swinging it toward the glass door when the two locked eyes.

“He acted like he was actually going to throw [the weight] at me, thought better of it, dropped it and then jumped down, got in my face and pushed me around,” Hayes said.

In a video posted by Olmos, Roberts — who can be seen in a camouflage-print hoodie and black baseball hat — appears to shove and yell at Hayes, who attempts to walk away from him with his arms held up. A second man appears to run toward Hayes and shoves him back. When Hayes again attempts to walk away from the men, the second man appears to shove and punch Hayes; a third man, who had been standing to the side, shoves Hayes as well.

Hayes said a right-wing livestreamer eventually reached him, wrapped his arm around him and led him out of the area. Hayes noted that he was wearing a press pass around his neck and was carrying his professional camera.

A few minutes later, Hayes said he was standing with two other reporters approximately 50 to 100 feet from the demonstrators when another individual approached and started threatening them. Olmos captured part of that interaction and what followed.

“As we’re standing there … Jeremy comes back over and he’s still pretty keyed up and he gets in my face and threatens to beat me up,” Hayes said. In the footage, Roberts can be seen positioning himself nose-to-nose against Hayes, saying, “You took a picture of me.”

“At that point I decided, ‘Not worth it,’ and walked away to deescalate the situation,” Hayes said.

As Hayes looked back a few minutes later, however, he said he saw Roberts lunge at Olmos and tackle him to the ground.

Here is two clips: this man lunges toward me.

Second clip if after I’m tackled, I get up to walk away. pic.twitter.com/ESaa0BJDS1

“I bolted over there to check on Sergio and make sure he was all right,” Hayes said, “and I got him out of there.”

Hayes said both journalists then left the area and walked a block away to where Oregon State Police had set up a police line.

The Statesman Journal reported that both journalists spoke to police about the assaults and gave officers a description of the assailant. A warrant was issued for Roberts’ arrest after an OSP trooper submitted a probable cause statement testifying that they had personally seen Roberts kicking and shattering a door to the Capitol.

The OSP did not respond to an emailed request for comment as of press time.

Independent journalist James Croxton, managing editor of Oregon-based website DoubleSidedMedia, said his life was threatened as he covered an anti-vaccine rally in Springfield, Oregon, on June 23, 2021.He said he was in the plaza in front of Springfield Library around 4 p.m. to cover the event, which was also advertised as a protest against mask-wearing to combat COVID-19, and against critical race theory. Croxton said there were around 40 protesters at the rally.“Many of them held signs about keeping critical …

Videographer assaulted, coughed on by individual at anti-vaccination protest

Independent videographer Sean Beckner-Carmitchel said he was confronted and assaulted by an unidentified man while he was reporting in Los Angeles at the site of a planned anti-vaccination demonstration on Jan. 31, 2021.Beckner-Carmitchel tweeted that when he arrived at the scene in West Hollywood in the early afternoon, only about three people had shown up to protest against lockdown rules and COVID-19 vaccinations, while about 15 counter-protesters were there. He shared a video of a verbal confrontation between several anti-lockdown … 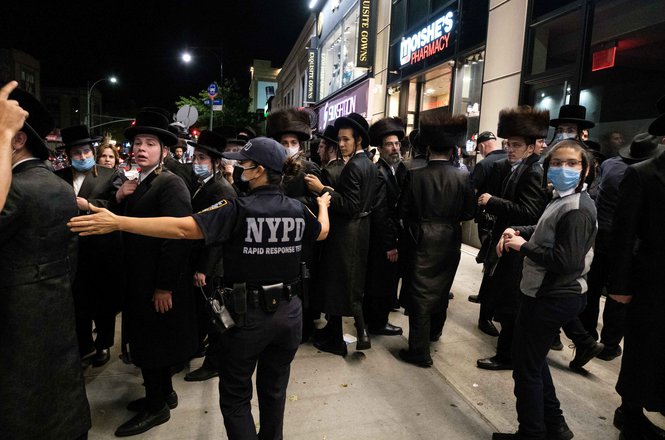