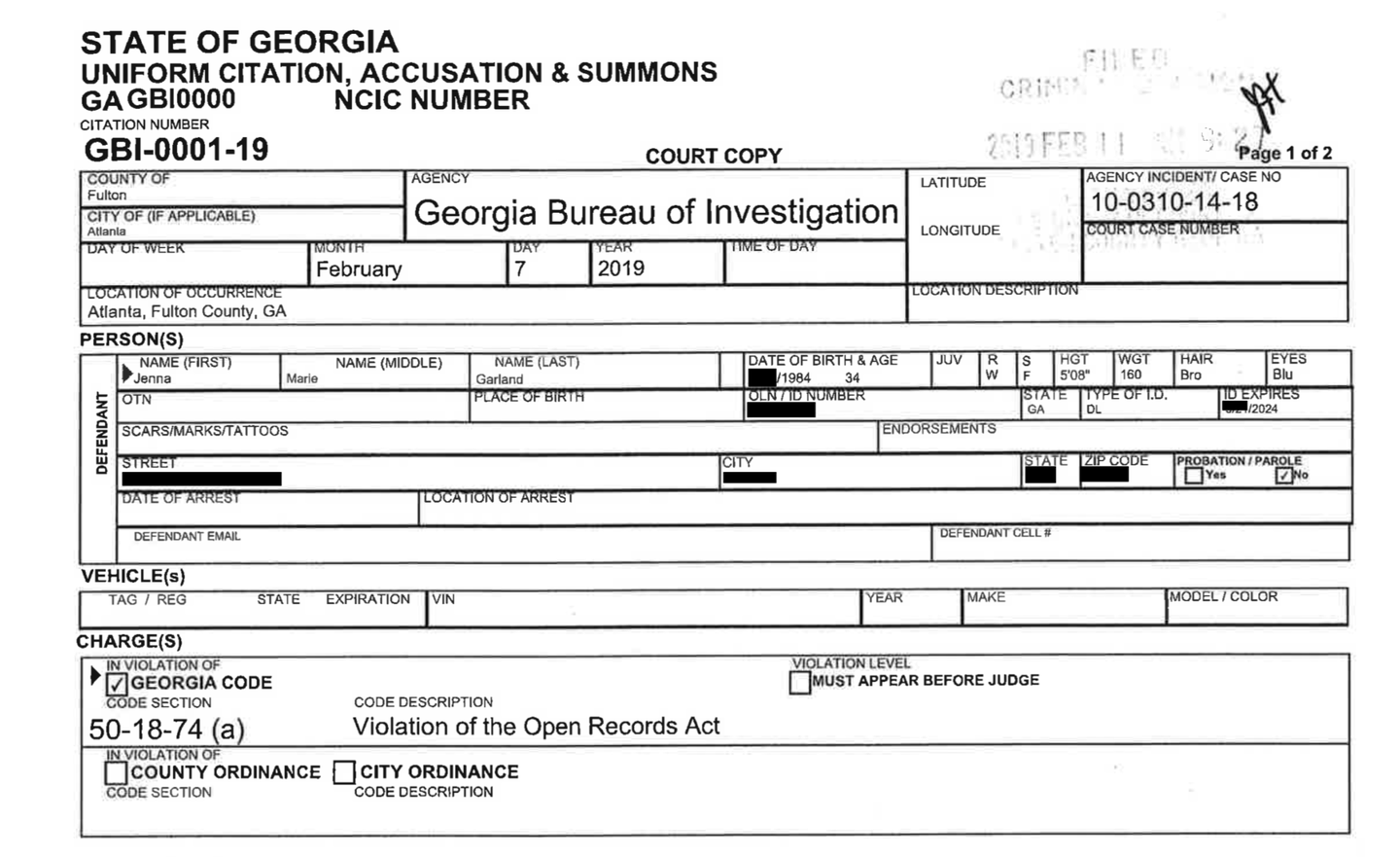 A portion of one of two citations issued in connection with violating Georgia's Open Records Act.

The Georgia state attorney general filed the first-ever criminal complaint in connection with the Georgia Open Records Act on Feb. 11, 2019. Jenna Garland, press secretary for former Atlanta Mayor Kasim Reed, was cited with two violations of the act and is accused of ordering a subordinate in the city’s Department of Watershed Management to delay handing over public records containing information damaging to Reed and other city officials in March 2017.

On March 7, 2017, WSB-TV Channel 2 Action News filed a records request for “billing, payment and usage records,” according to the citation. It alleges that Garland “knowingly and willingly attempt[ed] to frustrate the access to records not subject to exemption” by instructing then-watershed spokeswoman Lillian Govus via text message to “[d]rag this out as long as possible [a]nd provide information in the most confusing format available.”

The second citation alleges that Garland similarly obstructed a second records request from Channel 2, filed on March 21, 2017, when Garland instructed Govus to “‘[h]old all’ documents responsive to the request until the requestor asked for an update” via text message on April 7, 2017.

The texts were obtained and reported on by Channel 2 and The Atlanta Journal-Constitution in May 2018.

It is exceedingly rare for a public official to face consequences for obstructing public records requests, Jonathan Peters, media law professor at the University of Georgia, told the U.S. Press Freedom Tracker. “It’s not uncommon for state records laws to have those penalties built in to them,” he said. “What is really uncommon is to see a prosecutor actually use them.”

Peters said public records law violations aren’t often worthwhile for prosecutors to pursue given the challenge of securing a conviction under one of the criminal provisions of the law. “Good faith” is a defense built into many open records laws, including Georgia’s ORA.

“A good faith defense is so elastic and subjective that it’s not a terribly difficult defense for a public official to make,” Peters said.

When cases are pursued, he said, it is when the violations are so flagrant that they can’t be ignored.

“I think it’s the particularly bad facts of this case, where screenshots of the actual text messages are so clearly evidence of an effort to frustrate the public records law, that it is reasonably impossible to look at the behavior of Jenna Garland and see anything resembling good faith,” Peters said.

Violations of the ORA are misdemeanors, and if convicted Garland faces up to a $1,000 fine. She could also face up to a $2,500 fine for the second citation, depending on how the judge decides to hear the allegations.

“Openness and transparency in government are vital to upholding the public trust,” Georgia Attorney General Chris Carr said in a news release on the citations on Feb. 11, 2019. “I am confident that this action sends a clear message that the Georgia Open Records Act will be enforced.”

Jenna Garland, who faced the first-ever criminal charges for violating Georgia’s Open Records Act, was found guilty on two misdemeanor charges by a jury and ordered to pay a $1,500 fine on Dec. 19, 2019, according to WSB-TV Channel 2 Action News.

Garland, as press secretary for former Atlanta Mayor Kasim Reed, was accused of ordering a subordinate in the city’s Department of Watershed Management to delay handing over public records requested by Channel 2 in March 2017.

The citation alleged that Garland sent a text message with instructions to “[d]rag this out as long as possible [a]nd provide information in the most confusing format available” for one records request and similarly to “‘[h]old all’ documents responsive to the request until the requestor asked for an update” for a second records request.

The text messages were obtained and reported on by Channel 2 and The Atlanta Journal-Constitution in May 2018. The Georgia state attorney general filed the criminal complaint in February 2019.

The fines “may be a small amount,” Channel 2 general manager Ray Carter told The New York Times. “But this is significant. It shows that you have to comply with the law,” he said.

A Tennessee-based journalists from Chattanooga’s WRCBtv was told to leave and threatened with arrest after trying to ask a question at a town hall meeting with U.S. Rep. Marjorie Taylor Greene on Jan. 27, 2021.WRCB reporter Meredith Aldis was among a group of journalists invited to Greene’s town hall in Whitfield County, Georgia, about 30 miles southeast of Chattanooga. Upon arrival at the event, journalists were told they could not ask questions or speak to anyone in attendance, WRCB News …

Two Tennessee-based reporters, including a photographer from Chattanooga’s WRCBtv who asked not to be identified, were told to leave and threatened with arrest after one of them tried to ask a question at a town hall meeting with U.S. Rep. Marjorie Taylor Greene on Jan. 27, 2021.The WRCB photographer, who was reporting with WRCB reporter Meredith Aldis, was among journalists invited to Greene’s town hall in Whitfield County, Georgia, about 30 miles southeast of Chattanooga. Upon arrival at the event, …
More related incidents