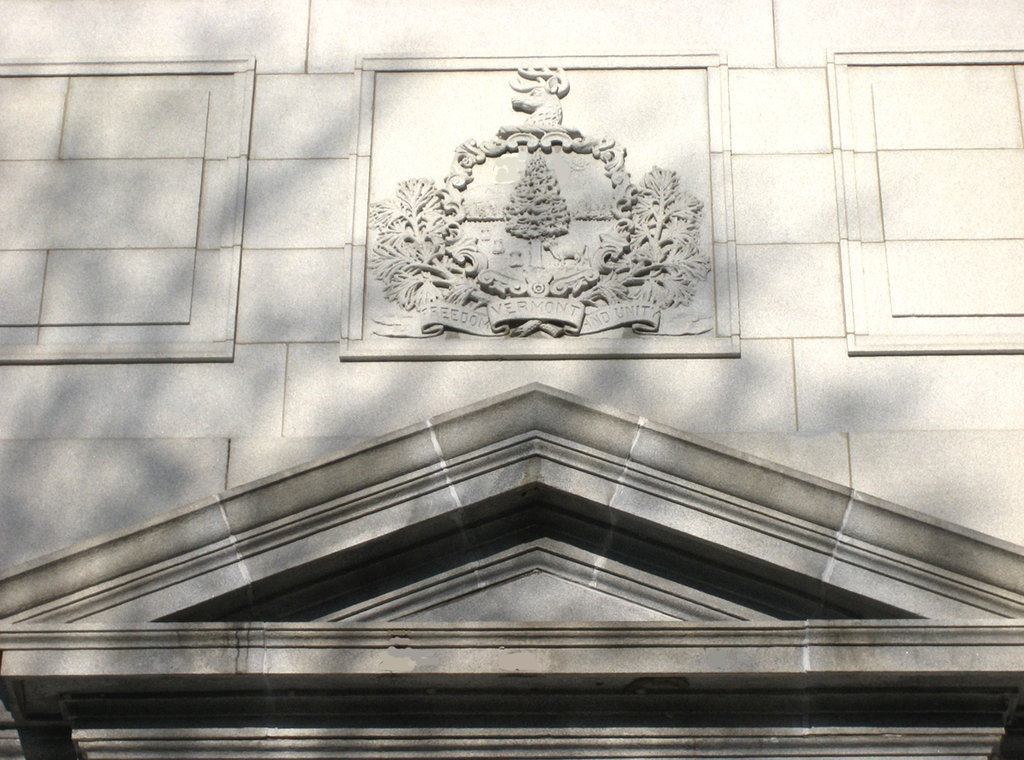 Above the entrance to the Vermont Supreme Court in Montpelier is the state's coat of arms. The Vermont Judiciary recently changed its rules for reporting in the courts.

The state court system of Vermont formalized rules on May 1, 2019, requiring members of the press to register in order to record or photograph in state courtrooms. According to VTDigger, the new rules, which also established who qualifies as a member of the press, took effect on Sept. 3.

The Vermont Judiciary’s rules state that members of the media, once registered or with a one-time waiver, can record audio, video or livestream within courtrooms, while trial participants can only record audio. The public is not allowed to record whatsoever.

Emily Wetherell, deputy clerk of the Vermont Supreme Court, told VTDigger that the new rules were made to modernize existing policies in the face of technological advances, particularly in regard to smartphones.

“The registration for media members, too, is a response to the power that cell phones give citizens in the courtroom,” Wetherell said. “That old rule was really just about media, because most people didn’t have the capability or the technology to record. But now most people can … and so in order to identify who media is, the committee decided that a registration process would be the most useful way of doing it.”

Mike Donoghue, executive director of the Vermont Press Association and vice president of the New England First Amendment Coalition, told VTDigger that while he understands the need to modernize the rules, he has concerns about how the judiciary will determine who is legitimately a member of the media.

According to The Manchester Journal, when the proposed rules went to the Vermont Supreme Court in January 2018, media was defined as "any individual or organization engaging in news gathering or reporting to the public, including free-lance reporter, newspaper, radio or television station or network, news service, magazine, trade paper, in-house publication, professional journal, or other news reporting or news-gathering agency, and any individual employed by such an organization."

Retired state Supreme Court Justice John Dooley, who chaired the procedural rules committee, told the Journal that they worked to adopt a “pretty broad” definition to avoid improperly denying applications for media registration. The registration system also established an appeals process by which a denied applicant can seek an “expeditious review” by the Supreme Court.

Shawn Cunningham, a reporter for The Chester Telegraph, told the U.S. Press Freedom Tracker that he was reporting on a hearing at the Windsor Criminal Division court when he was pulled aside by one of the court officers. The officer told Cunningham that he couldn’t take pictures without being registered.

“Now, I had seen this up on the wall the previous time I had been to court, but it seemed as if they were talking about recording, video and audio recording. And they said no, it’s all,” Cunningham said.

Cunningham said he was directed to the court clerk to register, but because approval would take several days he was able to receive a one-day registration waiver. In a matter of days Cunningham received his media registration, which appears to authorize him to take photos and recordings in Vermont courts in perpetuity.

“We have several things right now that affect our area that are going through the courts, and that’s both Vermont-run state courts and federal courts,” Cunningham told the Tracker. “So, I’m basically checking all the rules to make sure that whatever I’m going into at this point, that I’m good to go in there and do what I need to do.”