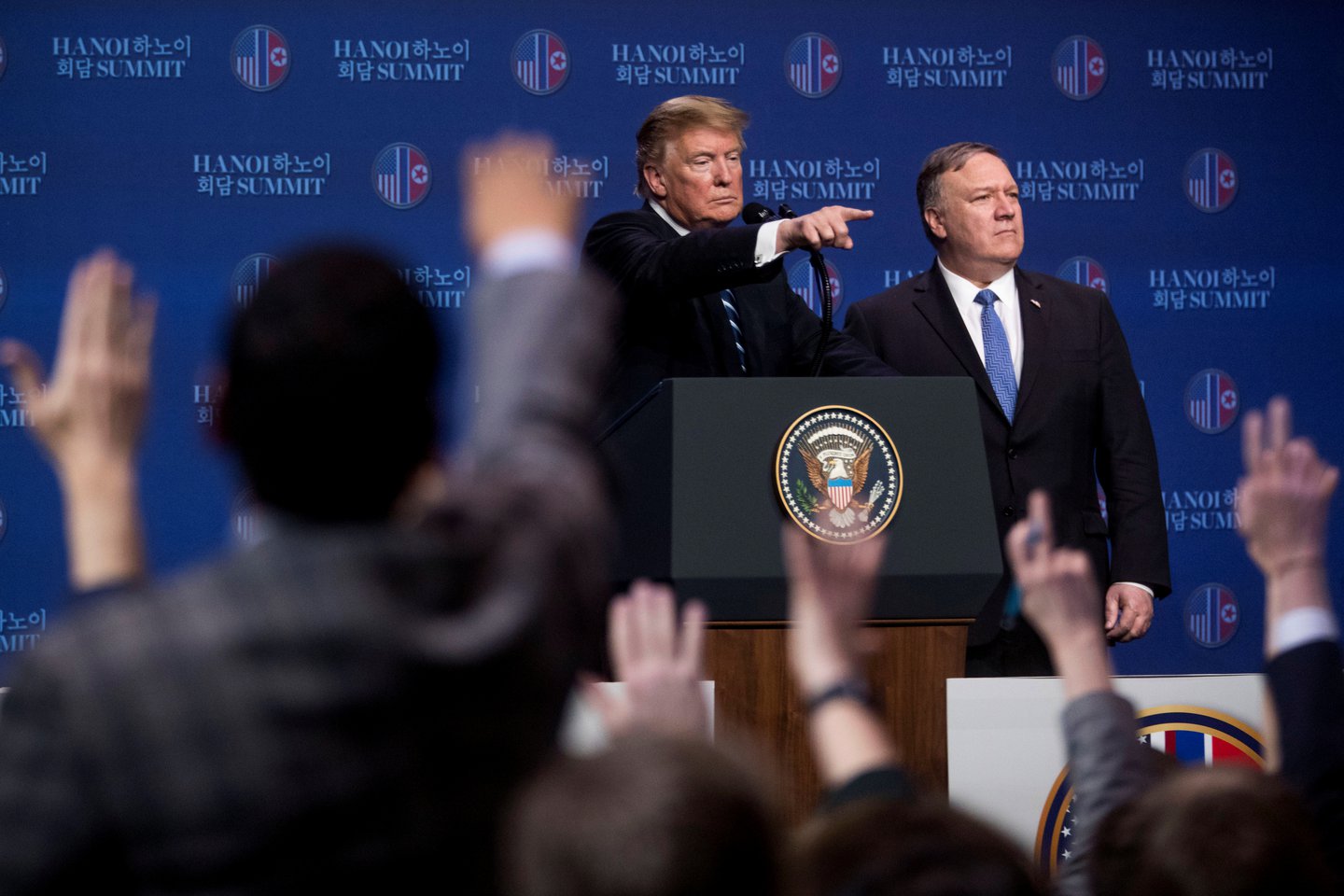 President Donald Trump, accompanied by Secretary of State Mike Pompeo, speaks at a news conference in Hanoi, Vietnam on Feb. 28. One day before, the White House barred four journalists from covering an event with North Korean leader Kim Jong-un.

On Feb. 27, 2019, shortly before the dinner was to take place in Hanoi, White House Press Secretary Sarah Huckabee Sanders told the press pool that only the photographers and news camera crews would be allowed to cover the dinner. After boisterous protests, including from pool photojournalists, Sanders conceded that one print reporter would be permitted to attend: Vivian Salama of The Wall Street Journal.

The four pool reporters who were barred: Jonathan Lemire of The Associated Press, Jeff Mason of Reuters, Justin Sink of Bloomberg News, and Eli Stokols of the Los Angeles Times.

The Washington Post reported that when Sanders was asked why the journalists representing the three largest wire services and a major newspaper were excluded, she said that it was because of “sensitivities over shouted questions in the previous sprays.”

During two brief photo opportunities on Wednesday night, American reporters—including Lemire and Mason—directed four questions at Trump; They asked Kim none. Trump and his aides have often complained about reporters asking the president questions during photo opportunities, particularly in the presence of foreign leaders.

In November, the White House issued new press conduct guidelines and has occasionally punished reporters for their questioning, most notably CNN reporters Jim Acosta and Kaitlan Collins, the latter of whom was banned from attending an event in retaliation for trying to ask President Trump a question during a photo-op.

Traditionally the White House has upheld the rights of journalists while a president is traveling overseas, particularly in instances where the president is meeting with leaders of a country where press freedom is limited or absent.

LA Times Executive Editor Norman Pearlstine said in a statement, “Previous administrations have often intervened to protect press access when foreign leaders have tried to limit coverage of presidential meetings abroad. The fact that this White House has done the opposite and excluded members of the press provides another sad example of its failure to uphold the American public’s right to see and be informed about President Trump’s activities.”

In a statement, Olivier Knox, White House Correspondents’ Association president, called the decision to exclude some of the journalists “capricious.” “This summit provides an opportunity for the American presidency to display its strength by facing vigorous questioning from a free and independent news media, not telegraph weakness by retreating behind arbitrary last-minute restrictions on coverage.”

Members of the press pool repeatedly asked Sanders whether North Korea was responsible for the restricted access, but she would not provide a direct answer. The ban came a day after the press pool was booted from the hotel where the White House had booked conference facilities to be used as a press workspace because Kim’s delegation had decided to stay at the same hotel.

In an emailed statement, Sanders said, “We are continuing to negotiate aspects of this historic summit and will always work to make sure the U.S. media has as much access as possible.”

The summit ended prematurely on Feb. 28.