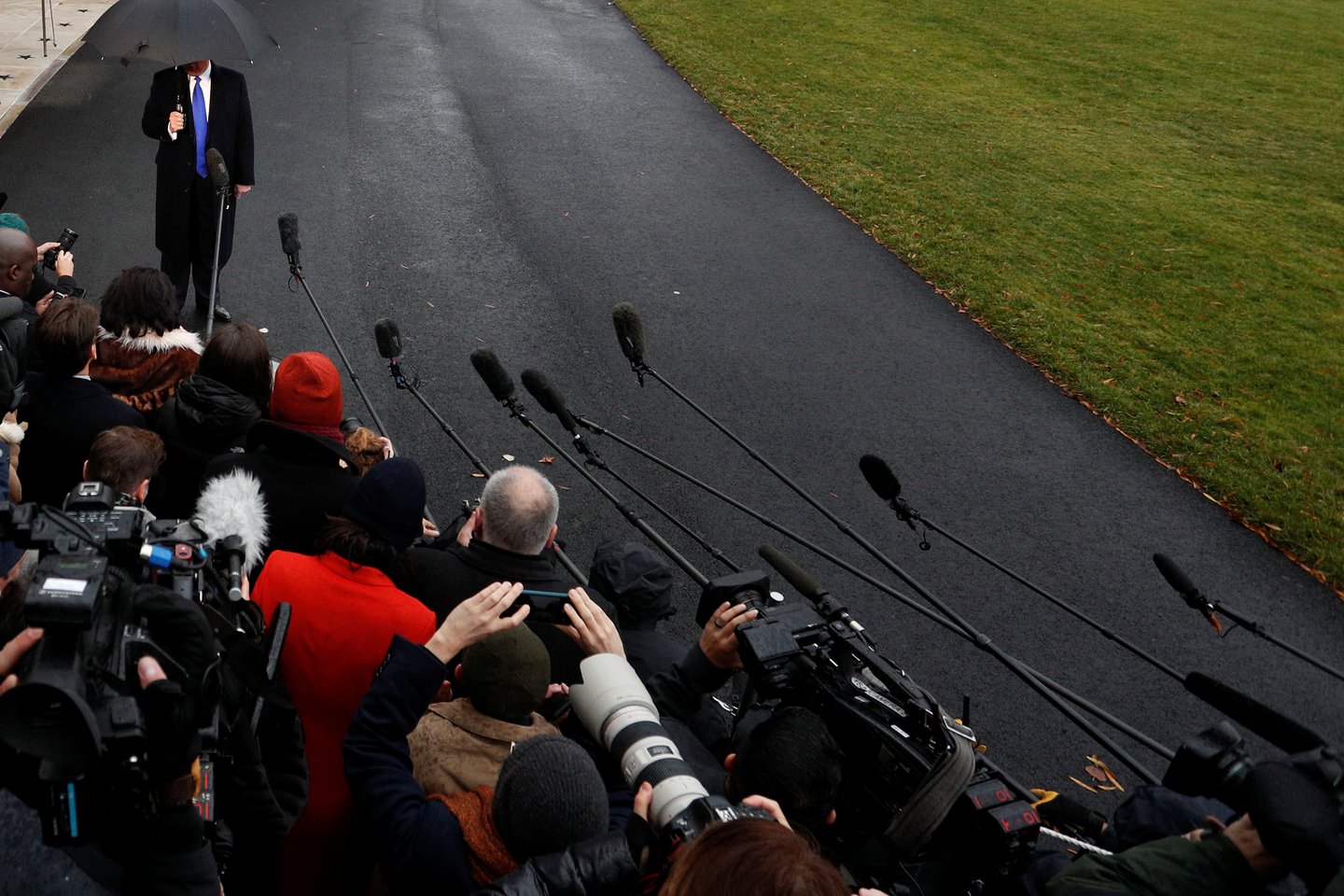 President Donald Trump speaks to the press before boarding Marine One at the White House in December. Trump, who completed his third year as president on Jan. 19, uses informal gatherings and social media to address the country.

Back on the campaign trail, President Trump increases his anti-press tweet offensive

President Donald Trump is increasing the amount of his anti-press language on Twitter while reviving the targeted social media tactics he used as a candidate, according to a new analysis of more than 18,000 of his tweets.

The U.S. Press Freedom Tracker maintains a database tracking Twitter posts in which Trump mentions media, individual journalists or news outlets in a negative tone since he declared his candidacy in June 2015.

Our analysis shows that as the president finished his third year in office, he increased his rate of tweeting negatively about the press compared with his second year. He also renewed his focus on individual journalists and — after a multi-year hiatus — Fox News. Trump’s broad condemnations of the press on Twitter continued escalating; while the media was “corrupt” or “dishonest” in 2015 and 2016, now it is fake, treasonous and an “enemy of the people.”

Trump’s tweets warrant scrutiny. The New York Times reported that his use of the platform helped get him elected and that Trump “has fully integrated Twitter into the very fabric of his administration, reshaping the nature of the presidency and presidential power.”

In January 2019, Trump tweeted that the lack of regular White House briefings was the result of instructions he gave then-Press Secretary Sarah Huckabee Sanders. It has now been more than 300 days since a press briefing took place. Administration officials and the president’s supporters have dismissed the importance of such briefings, asserting that President Trump’s Twitter feed connects him with the American people directly — without risk of the media “distorting” his message.

With each year of his presidency, Trump increases the amount he tweets. So, too, have the number of anti-press tweets increased. 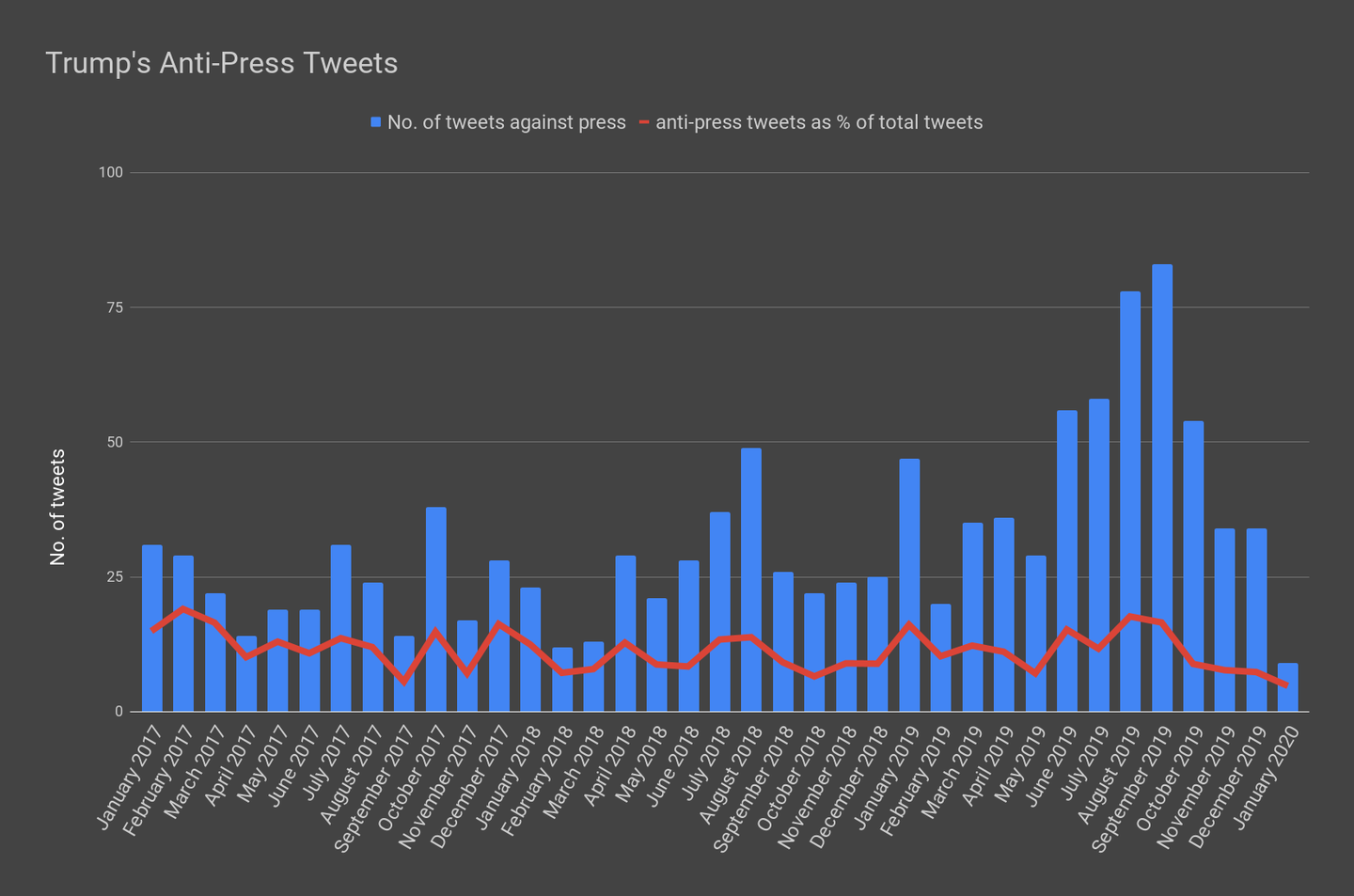 From Jan. 20, 2019 to Jan. 19, 2020, Trump tweeted negatively about the media 548 times — almost as many as his first two years in office combined. That means that more than 11% of the president’s original tweets focused on delegitimizing and insulting the U.S. media (the database doesn’t include retweets).

The Fake News Media has NEVER been more Dishonest or Corrupt than it is right now. There has never been a time like this in American History. Very exciting but also, very sad! Fake News is the absolute Enemy of the People and our Country itself!

Tweeted from @realDonaldTrump on March 19, 2019

Following the mid-June announcement of his bid for a second term, the frequency and rate of Trump’s anti-press tweets ramped up throughout the summer. In May, Trump posted 29 negative tweets about the media, or 7% of his total original tweets. In June, he posted 56 such tweets (15%) and 58 tweets in July (12%).

But it was August and September that would set records for the most anti-press tweets that Trump posted in a single month, with 78 in August (18%) and 83 in September (17%). The previous high was 72 tweets in December 2015 — the month between the fourth and fifth Republican presidential debates.

These numbers dropped dramatically when the official impeachment inquiry was announced on Sept. 24, 2019, as Trump’s social media attention shifted to Democrats in Congress. The average number of anti-press tweets in the last three months of the year was down to 41 (8%), or about half of what the president had posted in August and September. In the first 19 days of January, Trump only posted 9 anti-press tweets.

The Amazon Washington Post and three lowlife reporters, Matt Zapotosky, Josh Dawset, and Carol Leonnig, wrote another Fake News story, without any sources (pure fiction), about Bill Barr & myself. We both deny this story, which they knew before they wrote it. A garbage newspaper!

In 2019, Trump also increasingly insulted or called out individual journalists, the same tactic for which he received considerable censure as a first-time candidate. The Committee to Protect Journalist documented in 2016 the cases of several journalists who said that after being targeted by him on Twitter they were harassed, threatened or doxxed by having personal, identifying information released.

In this third year in office, Trump posted 75 tweets singling out and discrediting individual journalists — more than in his first two years combined.

Journalists targeted most on Twitter in Trump’s third year as president | No. of mentions:

Journalist Megyn Kelly, with 64 mentions, is named more than any other individual in Trump’s anti-press tweets. All of those were posted during his first candidacy, while she was working at Fox News.

A return focus on Fox

After nearly 2 ½ years without tweeting negatively about the outlet or its reporters, Trump also resumed posting critical tweets about Fox News in January 2019. Such tweets were prevalent during his candidacy, with Trump criticizing the outlet 148 times — nearly twice as often as any other media organization. He stopped entirely in July 2016, shortly after winning the Republican nomination. 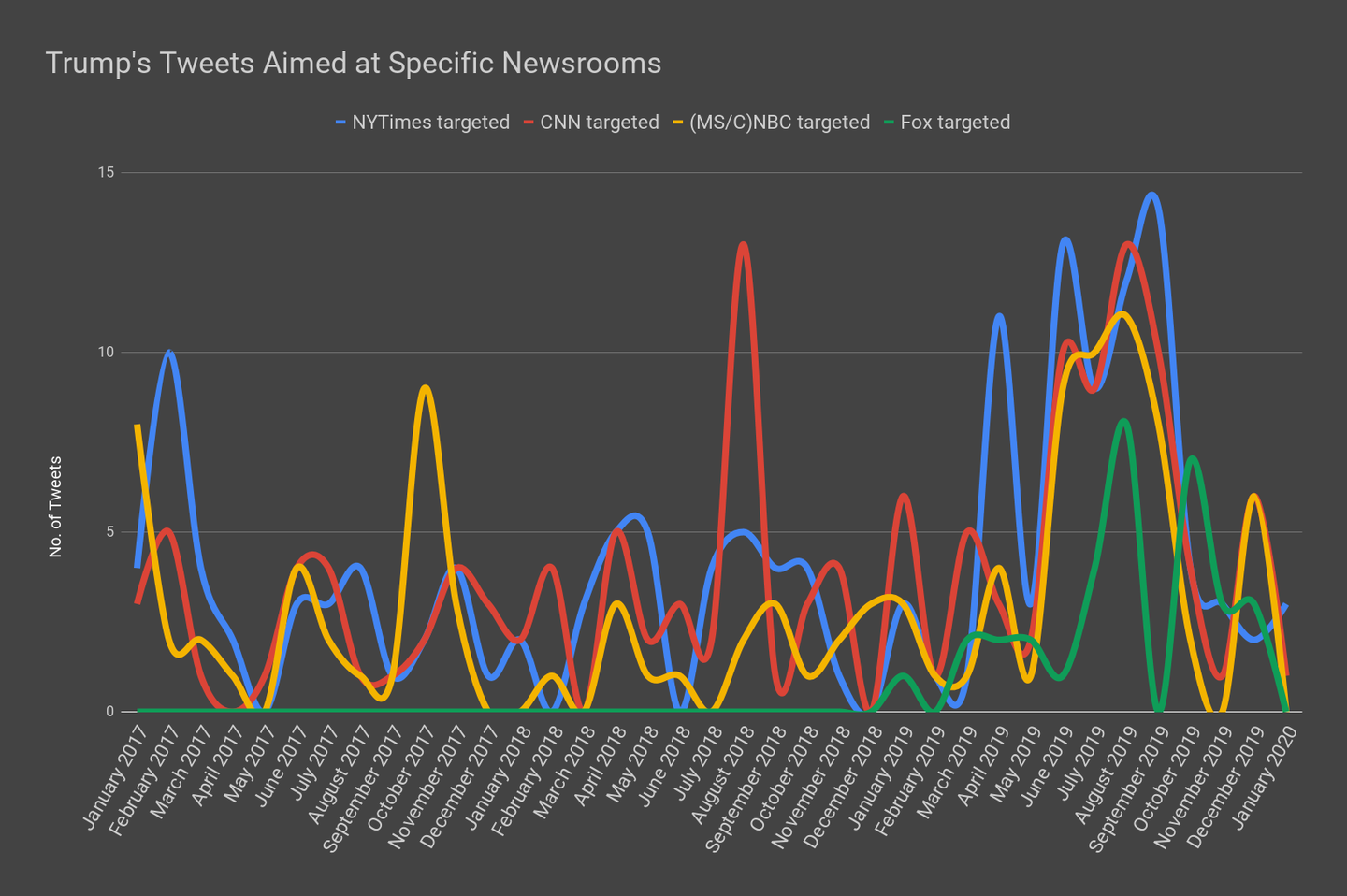 Overall, Fox News remains the fourth-most targeted newsroom, with 181 negative mentions of the outlet or its reporters. Most of Trump’s criticisms of Fox — both as a candidate and during his third year in office — have been aimed at specific journalists or shows, as well as the outlet’s polls.

....I don’t want to Win for myself, I only want to Win for the people. The New @FoxNews is letting millions of GREAT people down! We have to start looking for a new News Outlet. Fox isn’t working for us anymore!

The database shows that the singular most targeted outlet on Twitter is the Times, with 234 mentions. CNN has been targeted 225 times and MSNBC/NBC 189 times.

‘We no longer have Freedom of Press’

During his first candidacy, Trump rarely tweeted the broad condemnations of the news media seen throughout his presidency. The 282 negative tweets about the media he posted during his first year in office often consisted of insults such as “fake,” “failing” and “low rated”.

His second year in office brought the rise of “enemy of the people,” which he tweeted 21 times in an eight-month span. 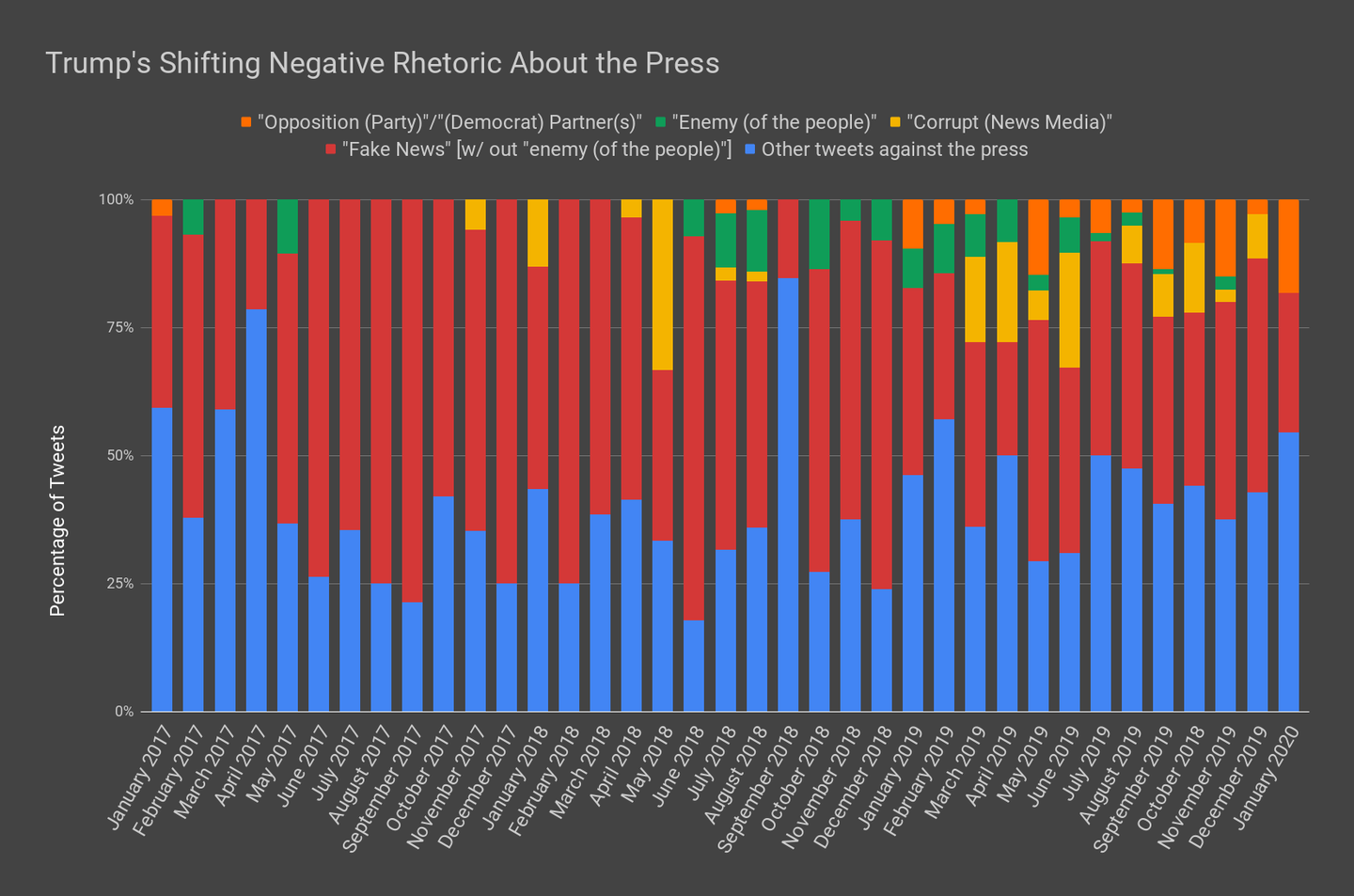 His third year saw surges in the use of “corrupt” and references to the media as the “opposition” or as partners of the Democrats. As the announcement of his candidacy for a second term approached in June 2019, the language on Twitter escalated further:

Do you believe that the Failing New York Times just did a story stating that the United States is substantially increasing Cyber Attacks on Russia. This is a virtual act of Treason by a once great paper so desperate for a story, any story, even if bad for our Country.....

One day after that tweet and two days before the official launch of his reelection campaign, Trump tweeted, “[The New York Times and The Washington Post] are both a disgrace to our Country, the Enemy of the People, but I just can’t seem to figure out which is worse?”

In a rare response, Times publisher A.G. Sulzberger wrote an op-ed published in The Wall Street Journal on June 19, warning about Trump’s escalating rhetoric and stating that accusing the press of treason for doing their jobs crossed a line and is “irresponsible and wrong.”

Since then, Trump has tweeted the moniker “enemy of the people” 5 more times and “fake news” 174 more times. In one week in November, he twice tweeted assertions that, because of the media’s dishonesty and lack of integrity, “we no longer have Freedom of the Press.”

Explore the database this election year

As the president continues to communicate through Twitter, we’re continuing to track the rhetoric using the same methodology and this live database for an ongoing accounting.

You are reading an article by Stephanie Sugars