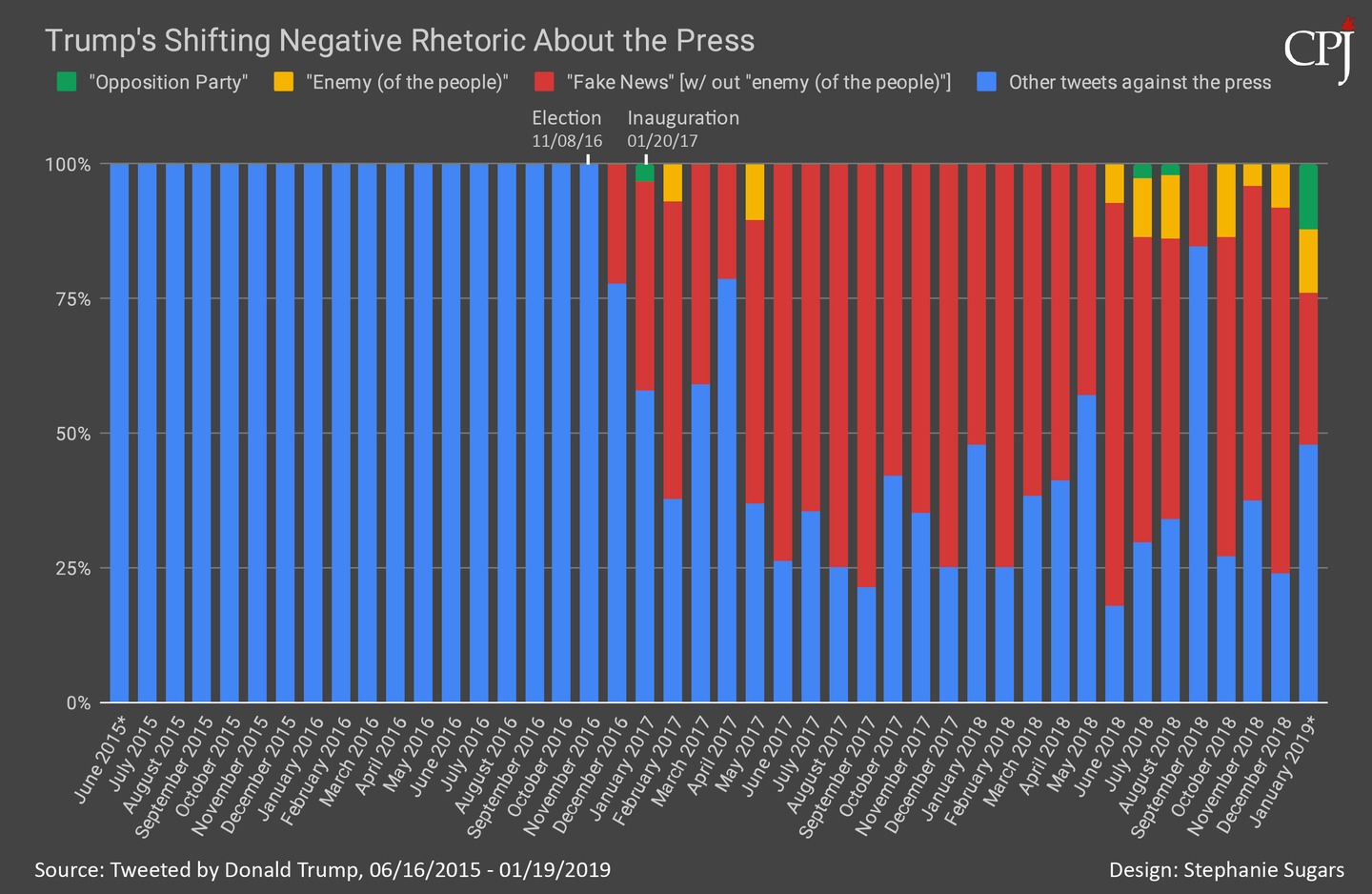 The term “fake news” did not appear in Donald Trump’s tweets until after he was elected president.

From fake news to enemy of the people: An anatomy of Trump's tweets

Since announcing his candidacy in the 2016 presidential elections to the end of his second year in office, U.S. President Donald Trump has sent 1,339 tweets about the media that were critical, insinuating, condemning, or threatening. In lieu of formal appearances as president, Trump has tweeted over 5,400 times to his more than 55.8 million followers; over 11 percent of these insulted or criticized journalists and outlets, or condemned and denigrated the news media as a whole.

To better monitor this negative rhetoric, CPJ’s North America program created a database to track tweets in which Trump mentioned the media, individual journalists, news outlets, or journalistic sources in a negative tone.

The president’s tweets can have an impact and consequences for the press both at home and abroad. His rhetoric has given cover to autocratic regimes: world leaders from Cambodia to the Philippines have echoed terms like “fake news” in the midst of crackdowns on press freedom. And the rhetoric has sometimes resulted in harassment of individual journalists in the U.S., where CPJ is aware of several journalists who say they were harassed or threatened online after being singled out on Twitter by Trump.

CPJ’s database of tweets can be viewed here and our methodology can be found here.

CPJ found that the focus of the tweets has shifted dramatically. During the campaign, Trump frequently called out specific journalists by name or Twitter handle, accounting for over a third of his negative tweets about the press during that period. This trend declined in the months leading up to the election and, since taking office, his focus shifted instead to the media as a whole, accounting for 63 percent of his tweets about the press in the first two years of his presidency, compared with 23 percent as a candidate. 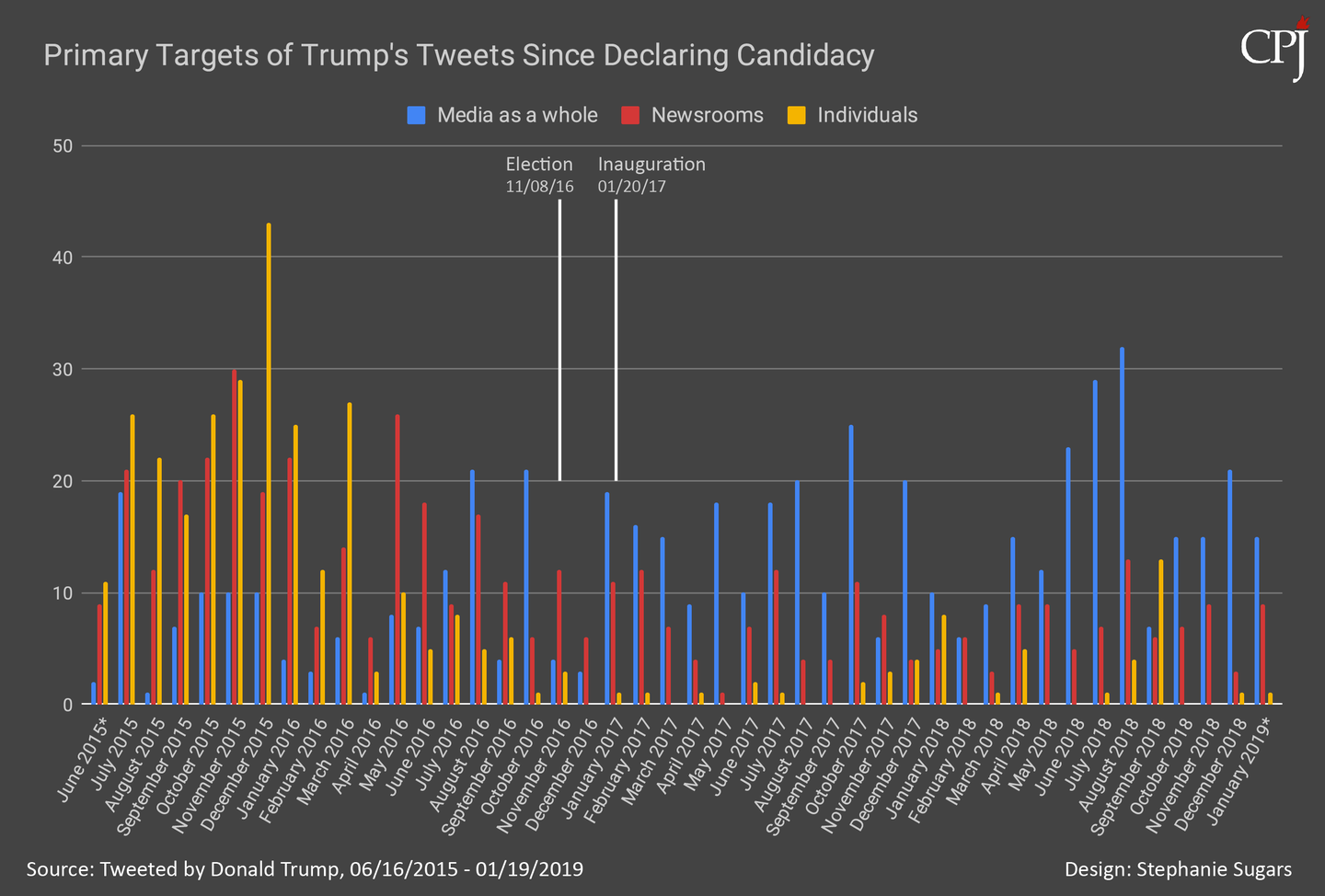 The overall number and rate of Trump’s tweeting has also decreased since he took office. However, those targeted at the press constitute a larger percentage of his total tweets during his presidency. Nine percent of all original tweets during his candidacy contained negative rhetoric about the press, compared with 11 percent in his first two years in office. His rhetoric—increasingly targeting swaths of the press—appears to be escalating, first from the introduction of “fake news” to “opposition party” and his use of “enemy of the people.” 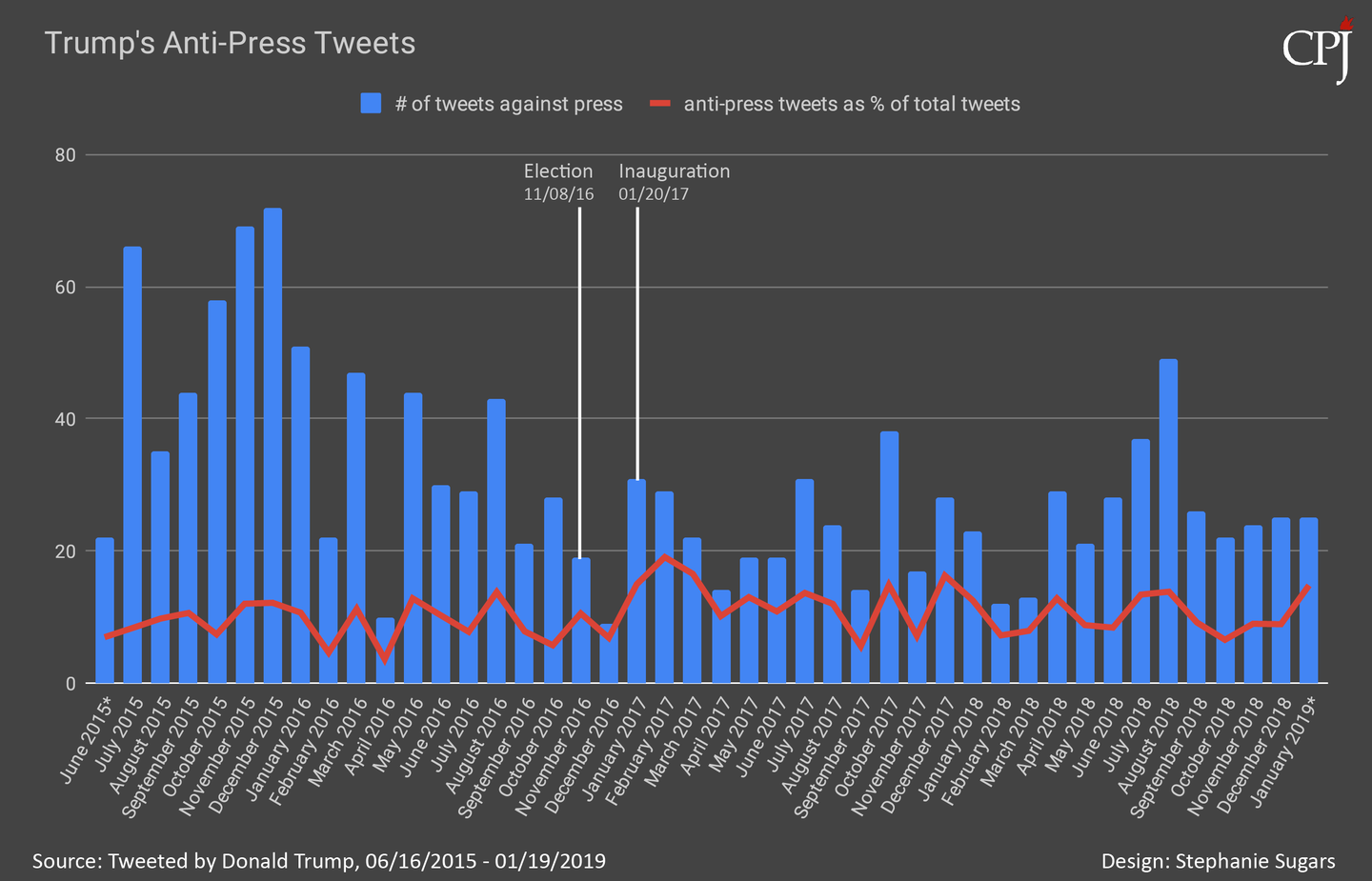 The term “fake news” did not appear in Trump’s tweets until after he was elected. It was used for the first time in December 2016, on the same day that Trump’s team distributed a survey urging supporters to “do your part to fight back against the media’s attacks and deceptions.” It came into more frequent use in January 2017, in reference first to leaked reports on Russian hacking and then to reports on his inauguration and approval ratings. Overall, in each of the first two years in office the term was used in over half his negative tweets about the press.

Trump uses his tweets to respond and react to critical coverage or investigative reporting. The months where tweets critical of the press accounted for the highest percentage of all original tweets posted were:

Trump insulted individual journalists via Twitter 280 times as a candidate. CPJ has documented cases of several journalists who said after being targeted by him on Twitter they were harassed or doxxed. During the first two years of his presidency, Trump has cited specific journalists 48 times. Notable exceptions to this sharp decline took place in January and September 2018, when Trump tweeted about Michael Wolff and Bob Woodward when their books on the president and his administration were released.

The database showed that the outlets targeted the most—either directly or through tweets about their journalists—were the New York Times and CNN, with Fox News coming in third. During the Republican primaries, Fox was a frequent target, cited in 148 tweets. Of these, Fox broadcaster Megyn Kelly was the primary target in nearly half, cited in 64 tweets, after the first Republican presidential debate in 2016, where she questioned Trump about the derogatory language he uses against women. In the weeks following the debate, Trump tweeted negative comments about Kelly, including insulting her both personally and professionally. Trump also targeted other conservative-leaning outlets during this period, including The Blaze, The Weekly Standard, RedState, and the National Review.

Trump has also used Twitter to accuse the press of falsifying anonymous sources. Trump tweeted about “phony,” “nonexistent,” or “made up” sources on five occasions during his candidacy, all of which were posted in the three months between winning the Republican primary and the election. This number doubled to 11 instances in his first year in office and then again to 27 in his second year as his administration was plagued with leaks and the investigation being led by Robert Mueller.

In the wake of the Annapolis shooting in June, CPJ, press freedom advocates, and media outlets called on Trump to moderate his rhetoric. However, five days after the shooting Trump called the “Fake News” the “Opposition party,” and 17 days after, he tweeted that “much of our news media is indeed the enemy of the people.” The moniker “enemy of the people”—first used by Trump to refer to the press in February 2017—appeared in only four tweets during his first year in office. In his second year, the number was 21, nearly all after Annapolis.

Methodology: CPJ’s database of Trump’s tweets includes posts from June 16, 2015 to January 19, 2019. The database includes tweets that CPJ judged to be insulting, denigrating, threatening, that asserted bias, made accusations of false reporting, or called for outlets and or staff to be boycotted or fired. CPJ classified primary targets as the individual, newsroom, or news media as a whole named in a tweet, and secondary targets as the outlet where a specific journalist named in a tweet worked. The database includes retweets only when Trump added a comment as well as “manual retweets” in which Trump copied and pasted another user’s tweet in quotes from his account.

Beyond the first two years

As the president continues to communicate through Twitter, we’re continuing to track the rhetoric using the same methodology and this live database for an ongoing accounting.

About Committee to Protect Journalists

The Committee to Protect Journalists is an independent, nonprofit organization that promotes press freedom worldwide. It defends the right of journalists to report the news without fear of reprisal.