Each month, this newsletter opens with a snapshot of categories from our home page. Above is where we stand today.

In this short — yet especially frigid — month of February we balanced working through the backlog of 2020 press freedom violations with finalizing documentation of January 2021 and election-related incidents.

All told, we captured nearly 50 press freedom violations tagged #Election2020. These spanned from an Oct. 31 March to the Polls in North Carolina through the rallies and protests around the November general election and into the U.S. Capitol insurrection on Jan. 6.

Find them all here.

Charges Pending: March will greet us with the start of the next work week, and several days warrant extra attention in this month: Multiple pending trial dates for journalists arrested while covering Black Lives Matter protests in 2020. I wrote about how these court dates will be a series of tests for press freedom.

There are parallel March 8 trial dates for reporters Andrea Sahouri and Richard Cummings, each arrested last summer as protests spread across the nation.

Sahouri was pepper-sprayed and arrested while covering a May 31, 2020, protest in Iowa for the Des Moines Register. She was charged with failure to disperse and interference with official acts. In October she was offered a plea deal of dropping one charge if she pled guilty to the other. She refused, maintaining a not guilty plea. After several delays, her trial is set for March 8 and is scheduled to be held in front of students at Drake University Law School, as part of an educational exercise. 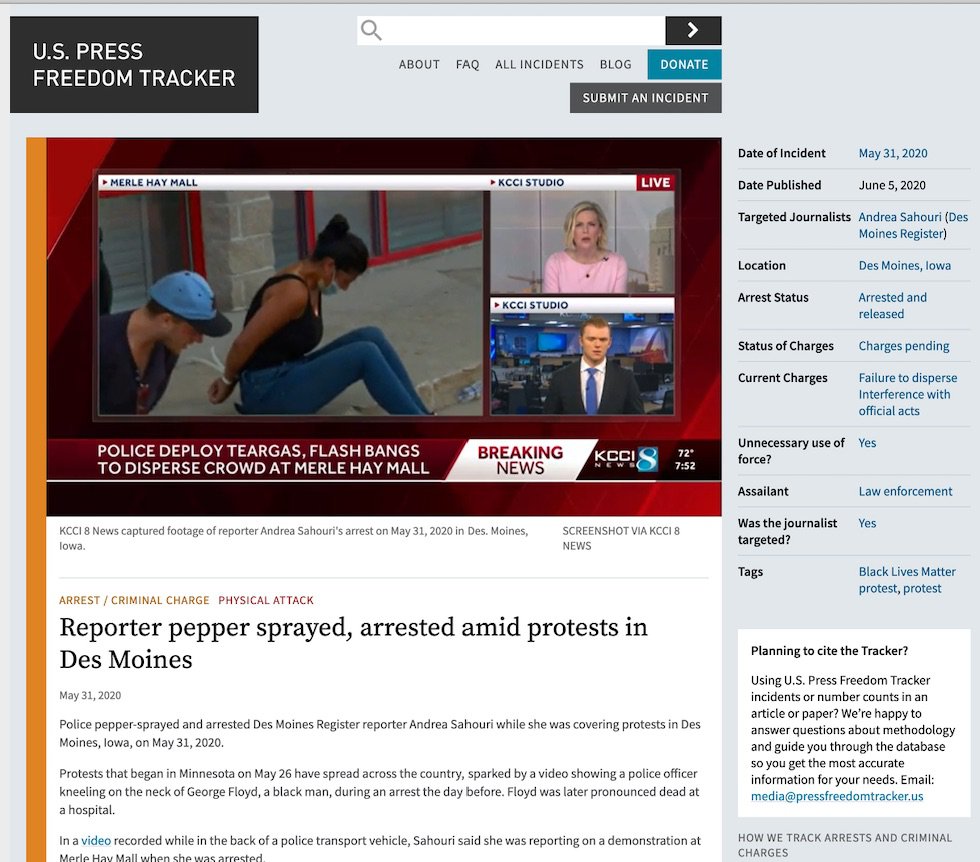 Freelance photojournalist Cummings was documenting protests in Worcester, Massachusetts, on June 1, 2020, when he was pepper-sprayed and arrested. Cummings was charged with disorderly conduct, disturbing the peace and failure to disperse during a riot. He told the Tracker that videos on his cell phone, which was taken with his camera when he was arrested, were missing when his equipment was returned.

Cummings pled not guilty during an August hearing, and on Nov. 22 a district court judge dropped two of the charges. Cummings now also has a March 8 hearing date for failure to disperse.

So far for 2020, we’ve documented 126 journalists arrested or detained, and 16 journalists — including Sahouri, Cummings, Beckner-Carmitchel and Singh — who still face pending criminal charges.

Charges Filed: Freelance journalist Kian Kelley-Chung was arrested while covering protests in Washington D.C. on Aug. 13, 2020, and held overnight in jail. Although police dropped felony riot charges against him, the journalist’s two cameras and cell phone were seized by law enforcement officers and were not returned for over two months, Kelley-Chung told the U.S. Press Freedom Tracker.

Now, Kelley-Chung is suing the Metropolitan Police Department, acting police chief Robert Contee III and the District of Washington for violating his First and Fourth Amendment, among other charges.

Since Tracker launch in 2017, we’ve documented nearly 200 arrests, detainments or criminal charges against journalists. Eleven of those journalists, including Kelley-Chung, have in turn filed suit against their arresting authority or city. 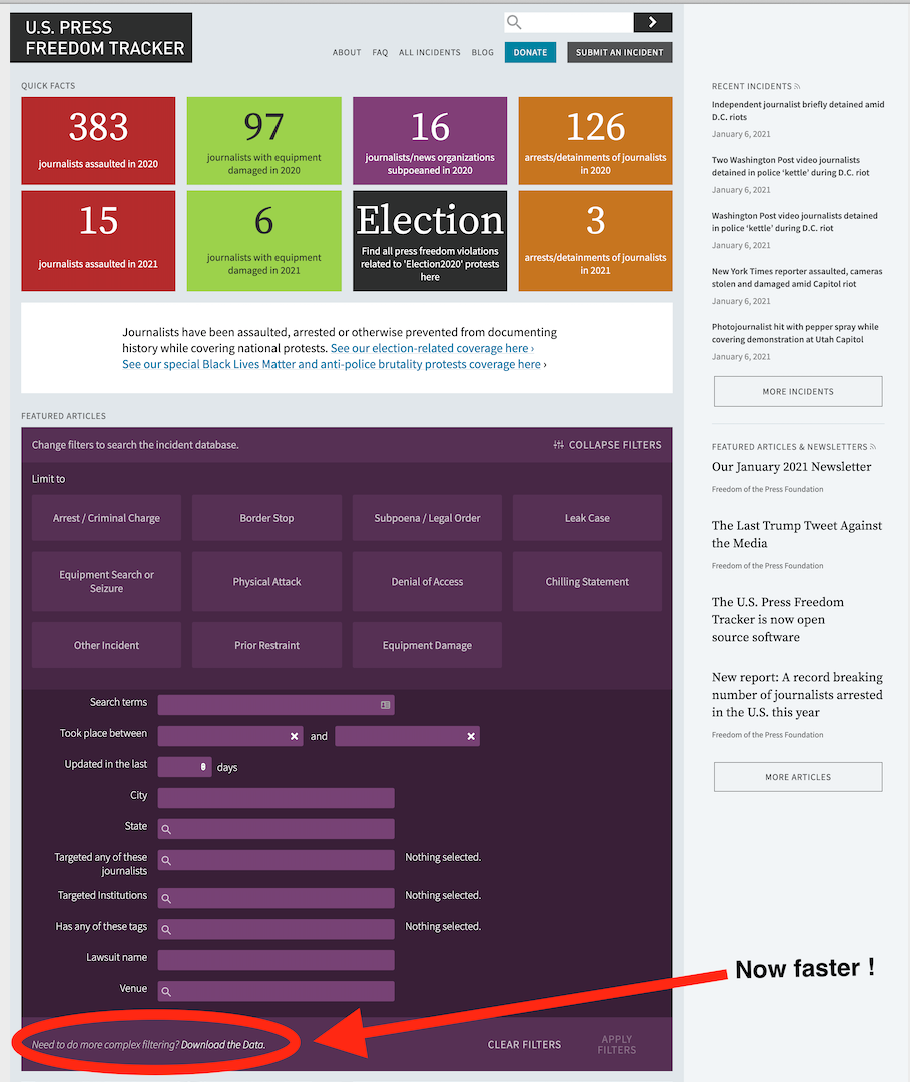 A round of applause for Freedom of the Press Foundation’s web team for a recent upgrade that makes downloading the Tracker API and exporting our data much speedier. That’s especially relevant if you’re creating your own data visualizations or just like to do your own deep dives into the Tracker’s information well.

Whether you download the data to make your own maps of press freedom aggressions or keep updated with this newsletter, please consider a donation. This work is possible because of supporters like you who donate to the Tracker.

Clarification: This newsletter was updated to reflect that journalists Richard Cummings, Vishal Singh and Sean Beckner-Carmitchel have pending hearing dates in March, not trial dates.