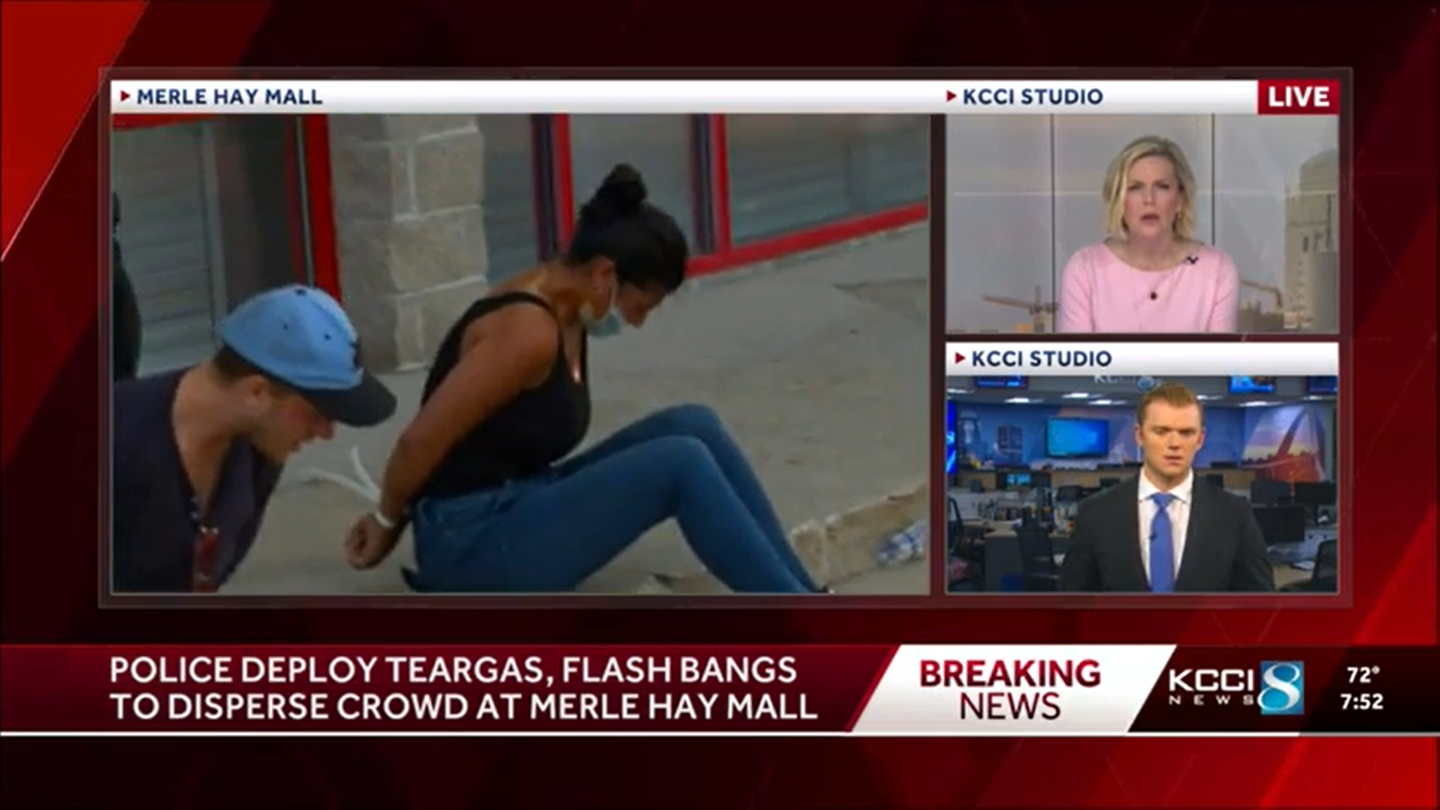 Police pepper-sprayed and arrested Des Moines Register reporter Andrea Sahouri while she was covering protests in Des Moines, Iowa, on May 31, 2020.

In a video recorded while in the back of a police transport vehicle, Sahouri said she was reporting on a demonstration at Merle Hay Mall when she was arrested.

Shortly before 8 p.m., Sahouri tweeted that police deployed tear gas, forcing all the protesters to run into the street. Sahouri said in her recording that she and her boyfriend were running with protesters when he was struck by a tear gas canister.

An officer responded, “I didn’t ask,” before spraying her twice in the face with pepper spray, the Register reported. Officers then handcuffed her using zip ties, Sahouri said in the video.

In footage captured by KCCI 8 News, Sahouri can be seen sitting on a curb, hands cuffed behind her back.

“I’m just doing my job as a journalist,” Sahouri said in her recording. “I’m just out here reporting as I see.”

Sahouri was taken to the Polk County Jail, where she was charged with failure to disperse and interference with official acts. She was released from police custody shortly after 11 p.m., the Register reported.

The Des Moines Police Department did not immediately respond to requests for comment.

A jury acquitted Des Moines Register reporter Andrea Sahouri of all charges following a three-day trial that ended on March 10, 2021. The decision follows three days of a trial that has been closely watched and a prosecution that has been widely criticized by press freedom and human rights advocates.

Sahouri was pepper-sprayed and arrested while covering a Black Lives Matter protest in Des Moines, Iowa, on May 31, 2020. The protest was one of the hundreds of demonstrations across the country sparked by the death of George Floyd, a Black man, during an arrest in Minneapolis on May 25.

Sahouri was charged with failure to disperse and interference with official acts, both simple misdemeanors. Des Moines police initially claimed she did not identify herself as a member of the press and remained in the area after officers issued an order to disperse; they also claimed she tried to pull away from the officer who pepper-sprayed her when he tried to place her under arrest.

On Oct. 8, Sahouri was offered a deal where one of her charges would be dropped if she agreed to plead guilty to the second charge against her, which she declined.

The trial against Sahouri began on March 8, 2021, in front of first year law students at Drake University. The Register reported that Sahouri, a colleague who was reporting with her and Register Executive Editor Carol Hunter testified that Sahouri was simply doing her job.

The six-member jury returned a verdict of not guilty on both charges at around 1:30 p.m. CT. Sahouri’s then-boyfriend, Spenser Robnett, was arrested alongside her in May and faced the same charges; he was also acquitted.

“I’d like to thank my family and friends, my Des Moines Register and Gannett colleagues and people around Des Moines, nationally and globally who have supported me for nearly a year after I was unjustly assaulted and arrested. I’m thankful to the jury for doing the right thing. Their decision upholds freedom of the press and justice in our democracy,” Sahouri said in a statement to the Register after the verdict.

Maribel Perez Wadsworth, president of news at Gannett Media, the Register’s parent company, provided a statement to the outlet following the verdict.

“We are very grateful that justice was done today, and that Andrea was fully exonerated. But it should never have come to this. It was clear Andrea was at that protest as a working journalist,” Perez Wadsworth said. “Andrea was assaulted, arrested, charged and ultimately tried for doing her job. Today’s victory was as much a victory for the First Amendment as it was for Andrea.”

Press freedom advocacy groups, such as the Committee to Protect Journalists and Freedom of the Press Foundation, founding partners of the U.S. Press Freedom Tracker, also widely condemned the trial and welcomed the verdict.

“Freedom of the Press Foundation is heartened that the jury apparently saw this case for what it is: a disgraceful use of prosecutorial resources and an assault on fundamental principles of press freedom. The jury verdict is welcome, but doesn’t fully lift the shadow this prosecution has cast over one of our country’s most core values,” FPF Executive Director Trevor Timm said in a statement.