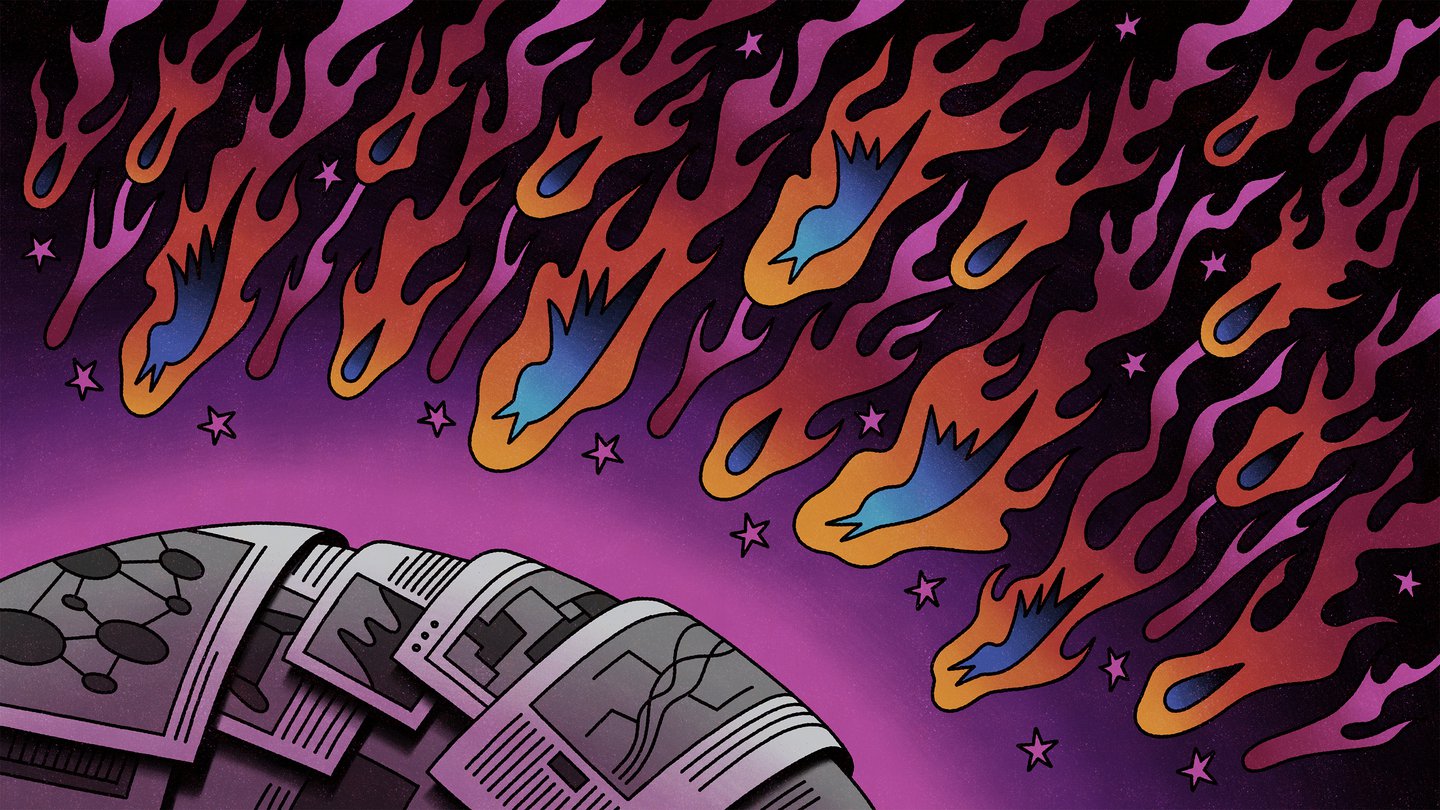 As the COVID-19 pandemic continues to upend daily life, President Donald Trump accelerated smearing the press on Twitter, reaching 2,000 negative tweets about the media in a string of insults and accusations on April 11, 2020.

According to our analysis of more than 19,400 of Trump’s tweets, 2,000 means that he has, on average, tweeted negatively about the press more than once a day for the past 4 ½ years. While the president’s rate of tweeting about the media has varied over those years, a noticeable uptick occurred as the severity of the new coronavirus progressed throughout the United States, and his administration’s handling of the global health crisis came under increased criticism.

The 2,000th tweet came on a Saturday, as part of a series of posted and deleted tweets, criticizing the coverage of no fewer than five outlets and accusing most of bias, if not outright corruption. The 2,000th tweet: 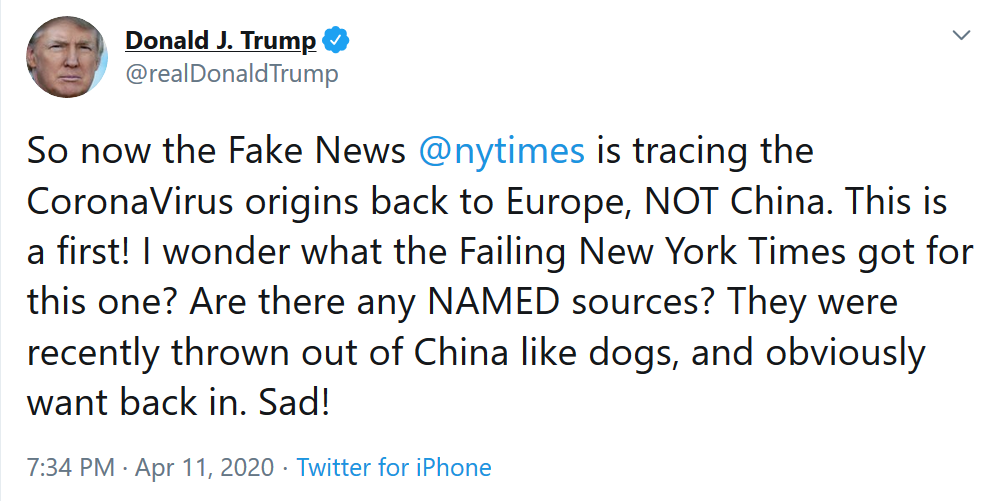 The U.S. Press Freedom Tracker maintains a searchable database tracking Twitter posts in which Trump mentions media, individual journalists or news outlets in a negative tone since he declared his candidacy in June 2015.

In January, we wrote that Trump’s anti-press tweeting had begun ramping up last year around his official reelection campaign launch, and that he was following the same “playbook” of attacking the press on Twitter that he used during his first campaign. Those Twitter mentions, however, dropped dramatically after the impeachment inquiry began in September 2019 and stayed relatively low through the end of the year.

As concerns about the new coronavirus took hold in the U.S. in early 2020, Trump’s negative media tweet rate began accelerating to a pace not seen in the previous 5 months. It rose from 5.6% of his overall tweets in January to 11.2% in March. During the week of March 23 — when the U.S. began to lead the world in confirmed cases — Trump criticized the news media in nearly one in every five tweets. 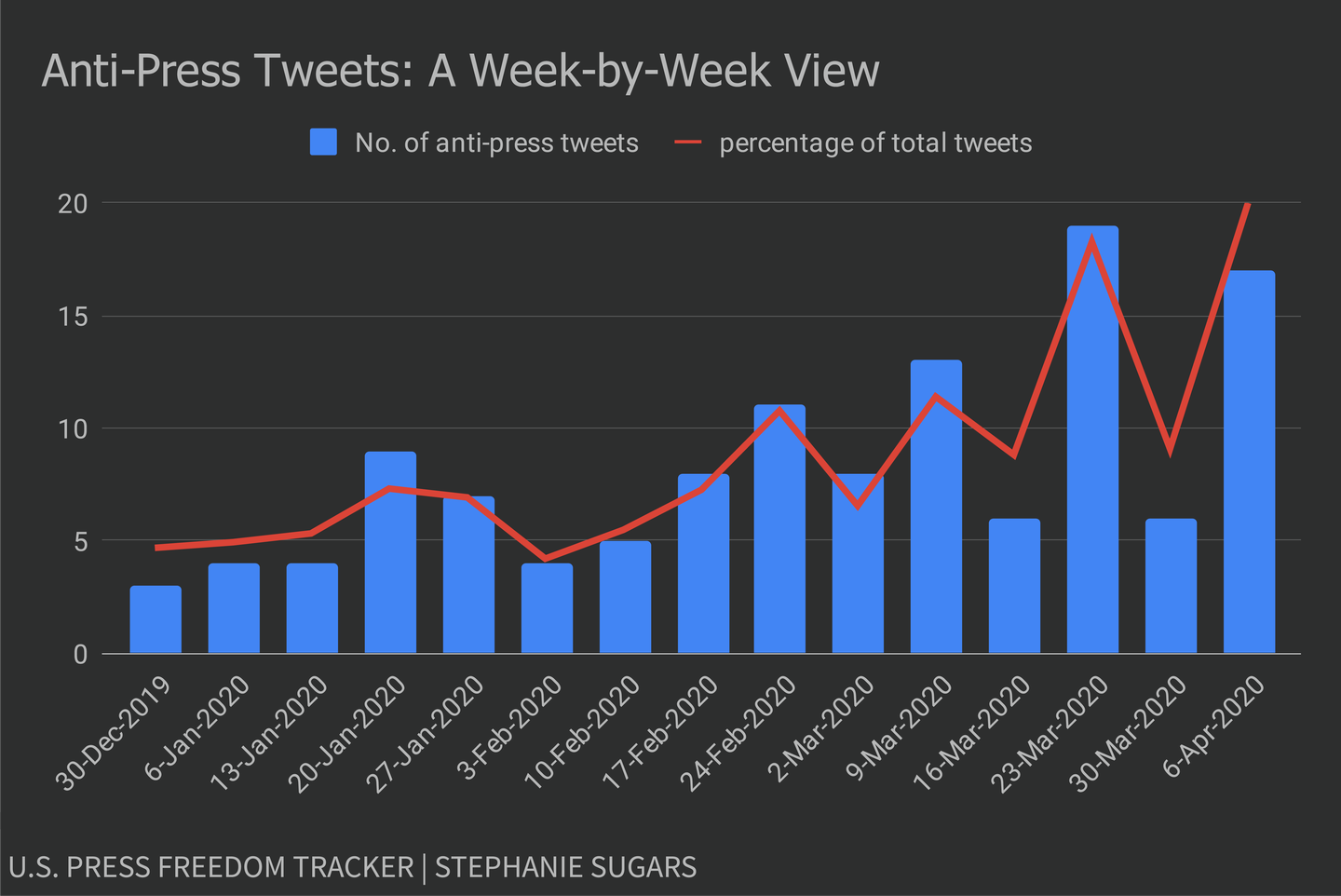 The Nation’s First Virus Death, and an ‘Enemy of the People’ Tweet

On March 1, Trump referred to a sweeping number of print and broadcast news outlets as “The Enemy of the People,” a term he first used shortly after taking office but which had seen less use in the previous six months.

The tweet came one day after the U.S. recorded its first coronavirus death, that of a Washington state man in his 50s.

The Times, The Washington Post, MSNBC, ABC, CBS News and more, he tweeted, “headed” the “Fake News Media” and were a source of national disgust and embarrassment. 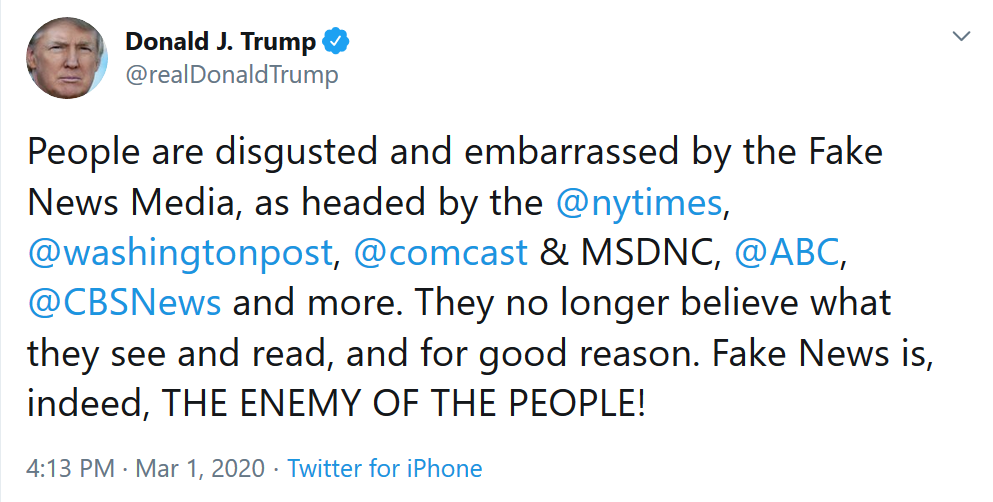 A week later, on March 8, he used the term again, singling out only the Times. A few days later, on March 11, the World Health Organization declared COVID-19 a pandemic, or global epidemic. On March 13, Trump declared a national emergency.

Over the course of the month, Trump tweeted a total of 447 times. Of those, 50 tweets used a negative tone about the press — nearly the same amount as in January and February combined.

Trump’s anti-press tweets predominantly focused on the media’s coverage of the pandemic and his administration’s response. Trump repeatedly condemned the use of unnamed sources, alleged that the media was deliberately dramatizing the outbreak to hurt the economy and his reelection chances, and asserted that outlets should unite with him in the face of the crisis, rather than continue covering the outbreak and response critically.

Of the 50 tweets, half targeted the media as a whole, with terms like “Enemy of the People” and “LameStream Media,” and descriptions of the media as “corrupt,” “dishonest” and “hopeless.”

Twenty tweets targeted specific news outlets, with MSNBC and the Times attacked the most often, and used demeaning “nicknames” like “MSDNC” and “DeFace the Nation.” Five individual journalists — representing four outlets — were also targeted by name.

Rachel Maddow and Joe Scarborough of MSNBC, Chuck Todd of NBC, Maggie Haberman of the Times and Chris Cuomo of CNN, all familiar targets of the president on Twitter, were each singled out. Cuomo announced he tested positive for the coronavirus on March 31. 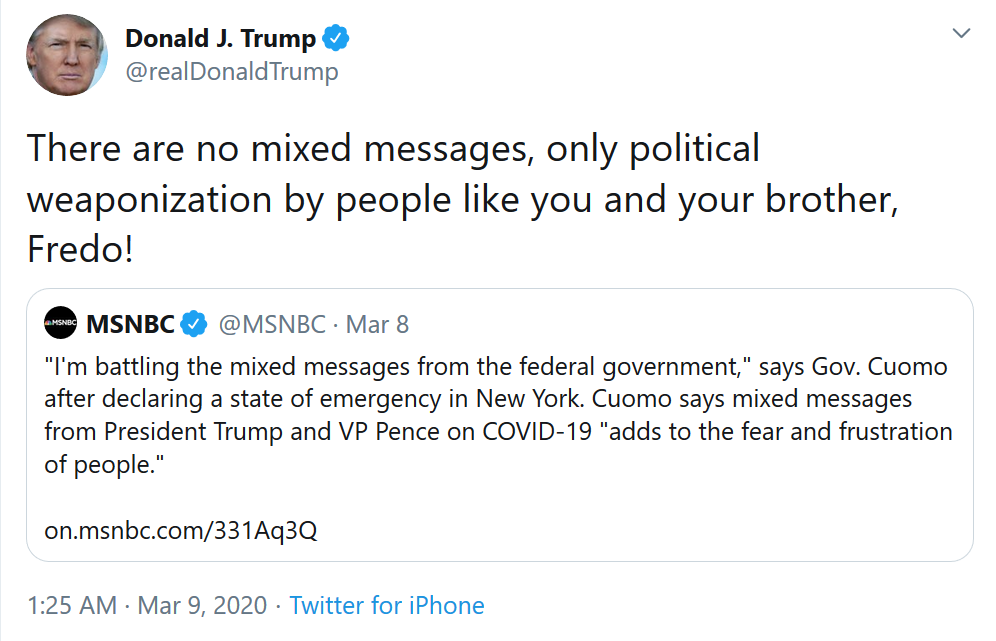 During his fourth year in office, 14.2% of Trump’s negative tweets about the media have targeted individuals, questioning their legitimacy, ethics and objectivity, as well as insulting their physical appearance or demeanor and assigning them demeaning nicknames. 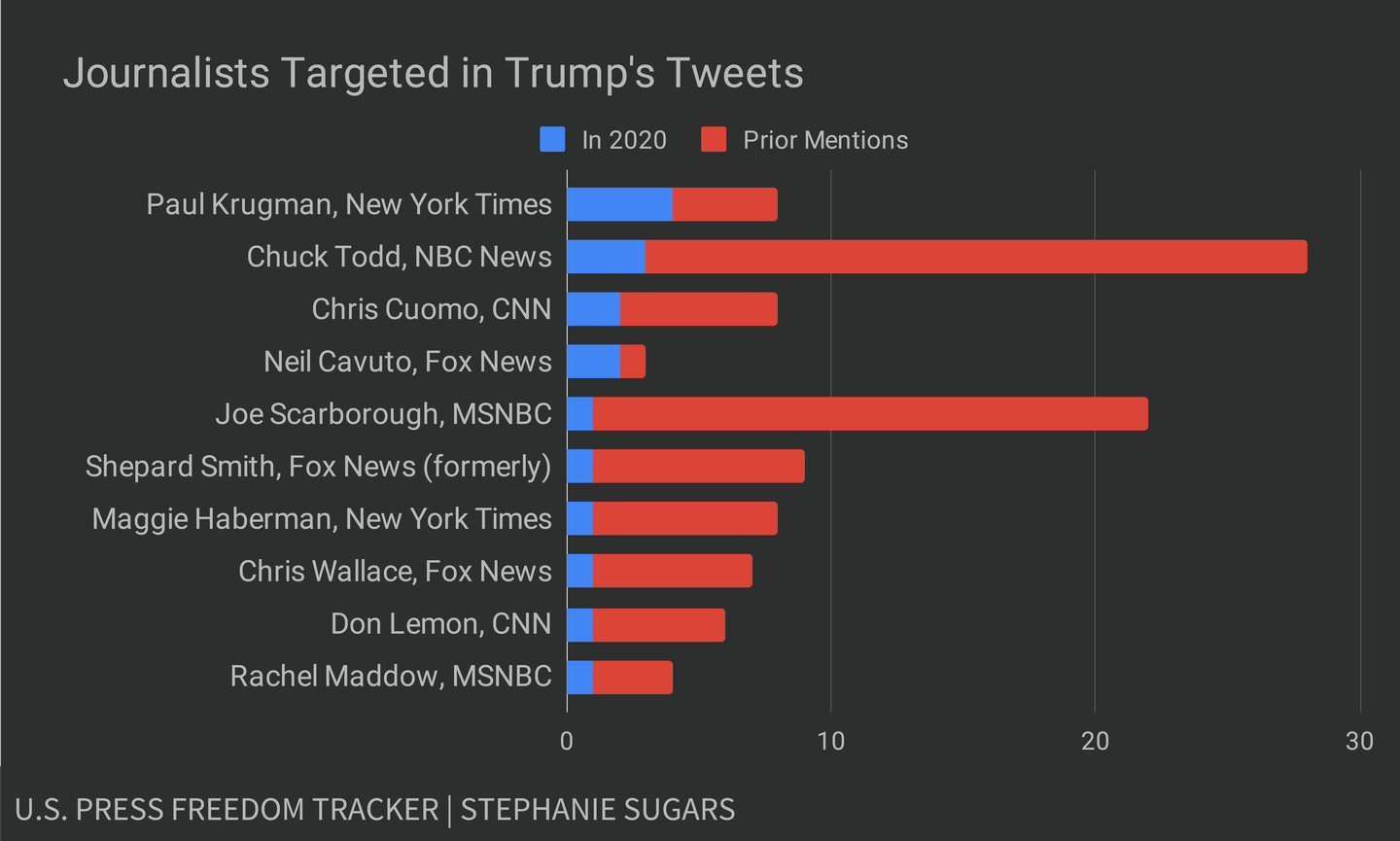 On Feb. 26, the same day White House press briefings resumed after a more than year-long hiatus, the president tweeted, “Low Ratings Fake News MSDNC (Comcast) & CNN are doing everything possible to make the Caronavirus [sic] look as bad as possible, including panicking markets, if possible.”

Trump tweeted multiple assertions that the media was continuing in its “war” against him in spite of the virus, and that the press briefings — this time with Trump leading them instead of a press secretary — were “reaching millions of people that are not being told the truth.” 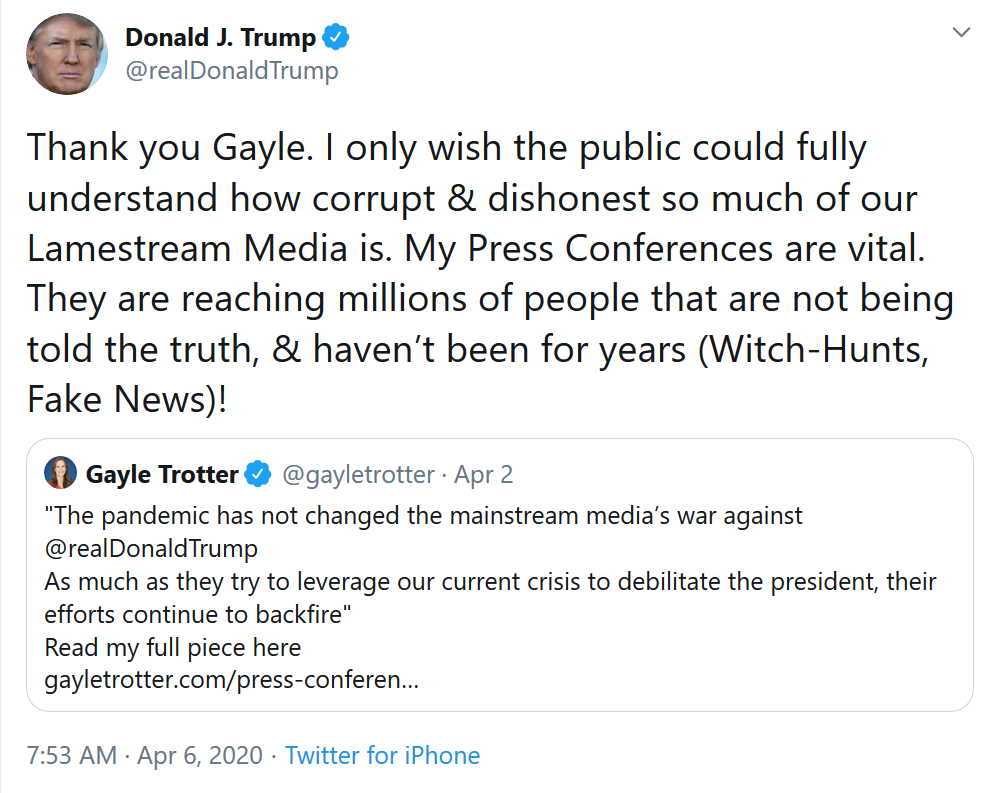 The president targeted ABC via tweet four times in 2020 — all in March and April — including calling the outlet an “Enemy of the People” and “Fake News.”

Trump had used the same insult in a tweet targeting the Times’ Maggie Haberman on March 27, as well as in reference to Vanity Fair’s Gabriel Sherman on March 11, though the president didn’t name him.

When PBS NewsHour reporter Yamiche Alcindor asked during a March 29 COVID-19 briefing about the president refuting governors’ needs for equipment, he replied that her question was “snarky” and her approach always “getcha, getcha, getcha.”

On April 5, Trump targeted Alcindor on Twitter, writing that she was “a very biased journalist.” 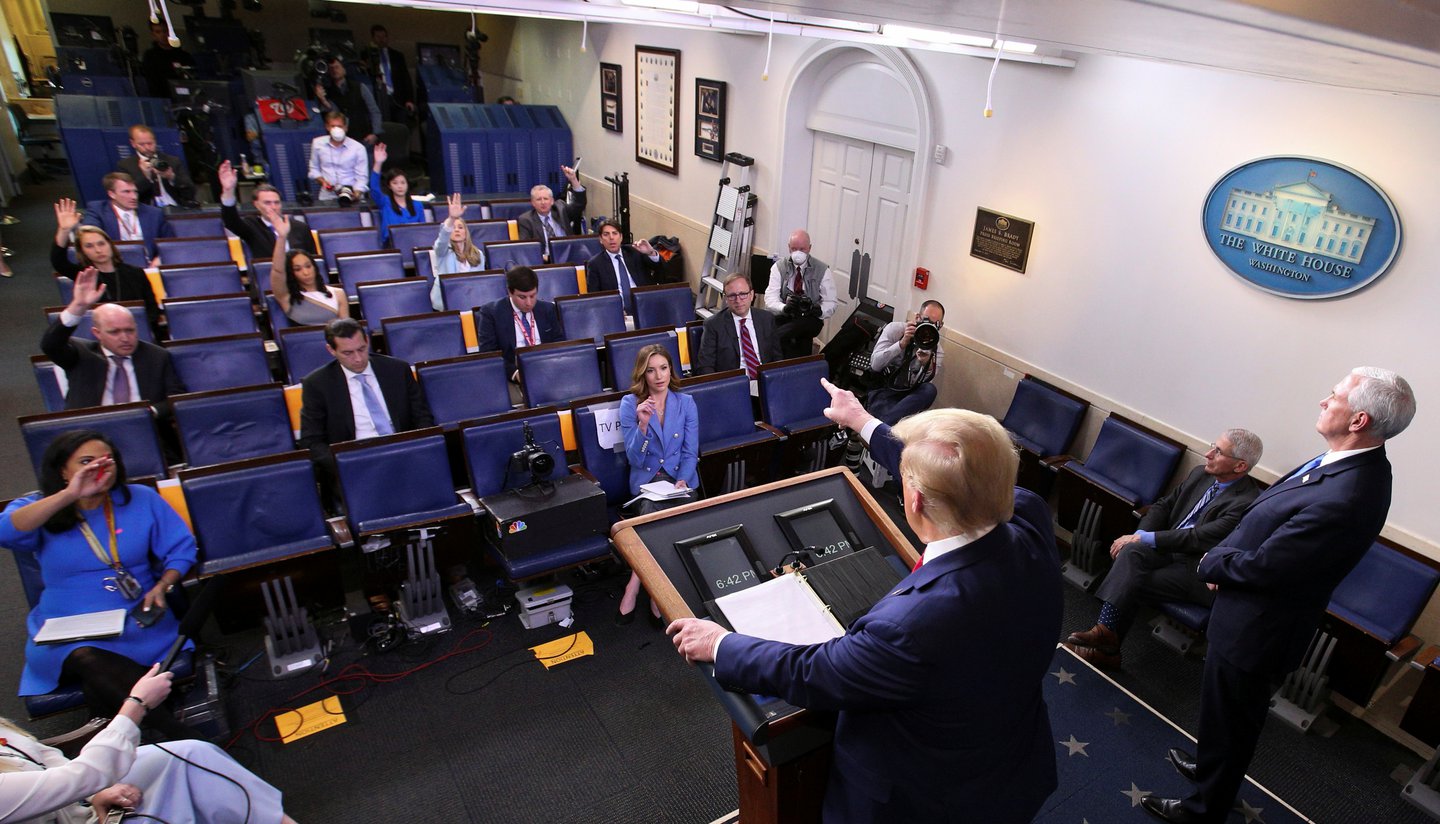 President Donald Trump takes questions during an April 6 coronavirus task force briefing at the White House with Dr. Anthony Fauci, Director of the National Institute of Allergy and Infectious Diseases and Vice President Mike Pence. In this briefing, Trump responded to a question by ABC’s Jonathan Karl, in the second row of seats on the far right, by calling him a ‘third-rate reporter,’ an insult he also uses on Twitter.

The 2000th Tweet: A Milestone of Attacking the Press

Through early April, Trump and the Coronavirus Task Force held press briefings almost every day, and by April 11, Trump had insulted or denigrated the press in nearly one in six of his tweets.

On Twitter, Trump referred to CNN as “a JOKE!,” the Wall Street Journal as “Fake News!” and singled out the Post and the Times, asserting that advertising is “WAY down” either because they are “Fake News” or because “the Virus is just plain beating them up.” 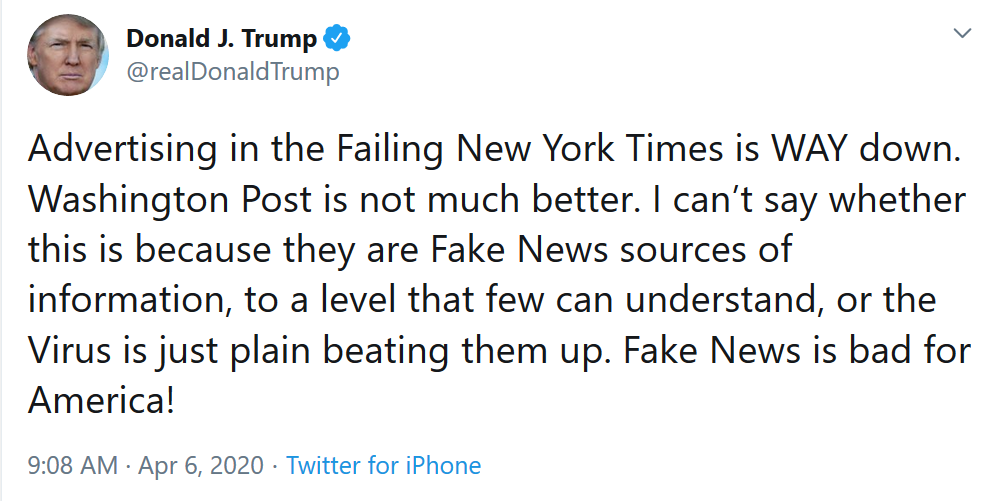 Trump posted a burst of eight tweets that day, a single-day amount not reached since September 2019.

All but one of the tweets targeted specific outlets. The president repeated his refrains about “MSDNC,” the “failing” Times and the “Amazon” Post, and criticized the Journal’s Editorial Board. Trump also disparaged Fox News, tweeting that watching it on weekend afternoons is “a total waste of time.” The tweet followed a report about equipment shortages at the Department of Veterans Affairs and coronavirus-related veteran deaths.

Three of the tweets targeting the Times were nearly identical, with the first two posted and deleted within minutes of each other. The third, which was the milestone-reaching tweet, was posted two hours later. In it, the president called the Times “Fake News,” “Failing,” and questioned its use of anonymous sources in an article linking New York coronavirus cases to Europe, not China.

The day’s string of tweets struck on multiple recent themes, with the president criticizing coverage of the pandemic and implying corruption in the newsroom.

Trump also delegitimized the standard news practice of granting sources anonymity, asserting on Twitter that anonymous sources are fabricated in order to hurt his administration. Nearly one in four of his anti-press tweets in early April — and one in ten in March — denigrated the media’s use of unnamed sources.

Undermining Coverage in a Time of Crisis

Language eroding public trust in the news media, while a hallmark of the president’s administration, has increased on Twitter in tandem with the spread of the coronavirus in the U.S. and criticism of the government's handling of it.

Trump complained about media bias in a majority of his 2,000 negative tweets, accusing the media of conspiring against him and refuting the accuracy of their reports.

From the first confirmed U.S. coronavirus case on Jan. 20, through reaching the milestone tweet on April 11, Trump tweeted negatively about the media 113 times. In those 83 days, at a time when the public increasingly sought news from established outlets, Trump intensified his criticism of individual reporters and the media’s coverage.

As the president continues to communicate through Twitter, we’re continuing to track the rhetoric using this live database for an ongoing accounting.

About Stephanie Sugars and Kirstin McCudden

Stephanie Sugars is a reporter for the U.S. Press Freedom Tracker

Kirstin McCudden is the managing editor of the U.S. Press Freedom Tracker