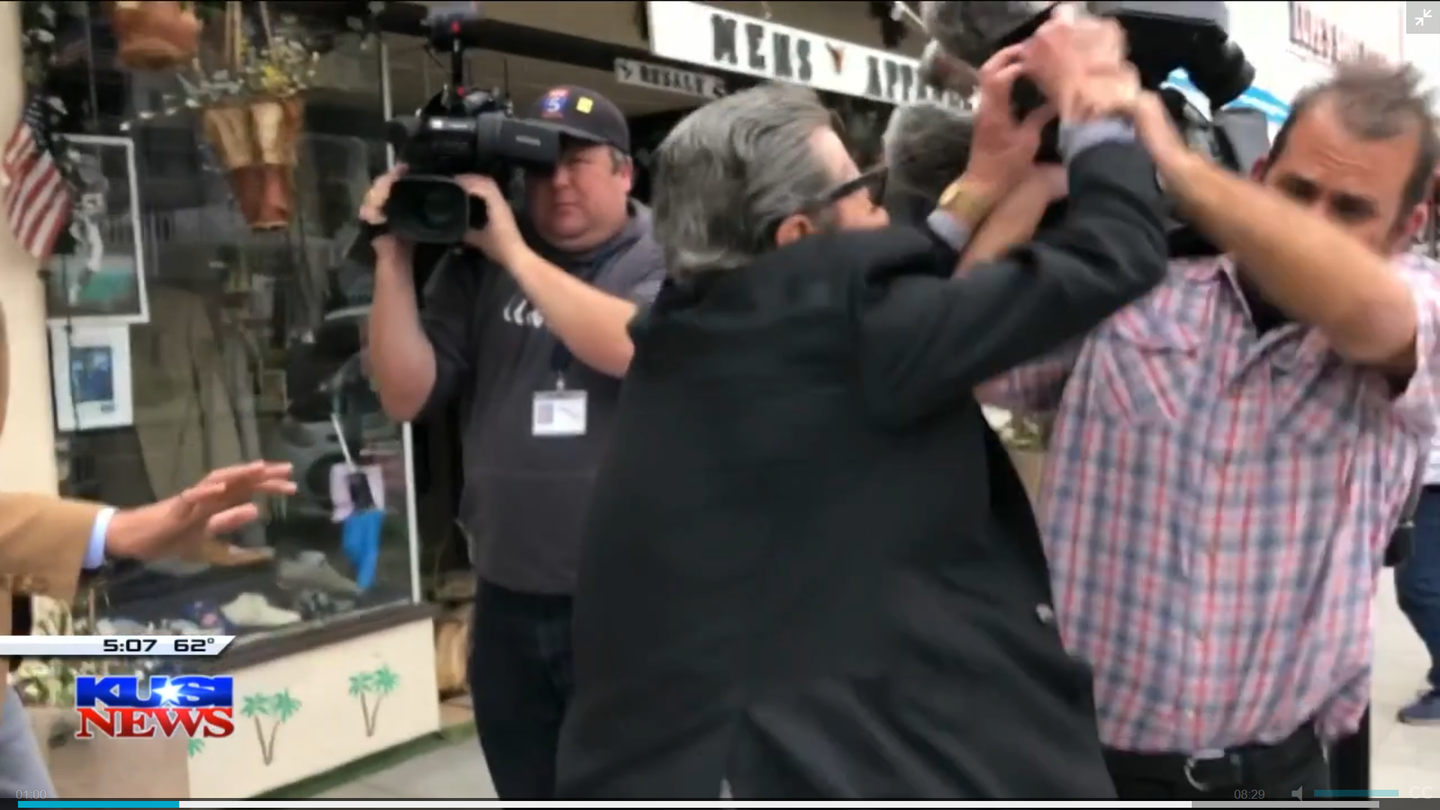 Several news crews were on scene when a La Mesa, California, store owner broke a Univision video camera and accosted this KUSI News cameraman and other journalists.

A La Mesa, California, business owner was arrested after altercations with several news crews on Jan. 20, 2020. The man also threw a reporter’s video camera to the ground, causing thousands of dollars of damage.

Reporters and photographers had gathered outside of a men’s apparel store to speak with owner Peter Carzis concerning allegations that he had engaged in lewd and inappropriate behavior in front of his shop.

Claudia Buccio, a multimedia journalist for Univision, posted on Instagram that she was capturing footage in front of the store for her piece and did not see Carzis approach her.

“He yanked my shoulder, pushed me and then he grabbed my camera and threw it to the sidewalk,” she wrote. “Thank God there were fellow journalists in the area who jumped out at my defense.”

Buccio wrote in a subsequent comment that several other news crews were in the area to report on the accusations against Carzis, but were in their vehicles and did not film the attack.

A crew from KUSI News, an independent station in San Diego, was among those who came to Buccio’s defense. KUSI News Director Steve Cohen told the U.S. Press Freedom Tracker that reporter Dan Plante stepped in to stop Carzis’ attack.

Plante recounted the incident in a live broadcast that evening.

“The first person he went after when he came out blazing was a young woman from Univision, and he pushed her up against the wall and he took her camera and he threw it in the street and broke it into a hundred pieces,” he said.

Carzis then turned on Plante.

A video taken by Plante on his cellphone shows Carzis attempting to hit him multiple times before rounding on KUSI cameraman Michael Saucedo, pushing him into a couple parking meters and pursuing him several yards down the sidewalk.

Media assaulted, camera broken, women groped in public and Peter Carzis is finally tracked down and arrested in downtown San Diego. After “years of abuse” the people in the Village of La Mesa are breathing easier now that police are taking action. KUSI Tonight pic.twitter.com/a7ZgMqNP2d

In the video, Plante can be heard telling Carzis that he’s “about to get arrested.” Carzis then turns again on Plante, attempting to both hit and kick him. A brief scuffle ensued as Plante attempted to keep Carzis at a distance, according to his accounting of the attack.

“When he was throwing punches at me, I was kind of laughing a little bit because I’m not afraid of a guy like that,” Plante said. “So what was going through my mind was, ‘Block the punches, block the kicks, get it all on video tape and expose this guy for who he is.’ And I believe that’s what happened.”

Carzis did land a blow against him, Plante said, resulting in a small cut on his nose from a piece of jewelry Carzis was wearing. Plante also dropped his phone in the altercation, but KUSI News Director Cohen told the Tracker it was not damaged.

Other journalists, including ABC 10News reporter Mimi Elkalla and photographer Virginia Creighton, witnessed the assaults but were not targeted by Carzis.

Plante called 911 and Carzis retreated to his store, locking the door behind him. Carzis was gone by the time police arrived, according to a press release from the La Mesa Police Department.

Police said that after canvassing the area, they located Carzis in nearby San Diego and arrested him on Jan. 21 on charges of misdemeanor battery and felony vandalism.

“Carzis is accused of battering multiple reporters and causing irreparable damage to a video camera reported to be worth approximately $7,000.00,” the press release states.

KUSI News Director Cohen told the Tracker that the broadcaster had not needed to press charges, but they expect Plante or Saucedo will need to provide testimony as the case against Carzis moves forward.

“It was just an absolutely crazy thing,” Plante said of the attack. 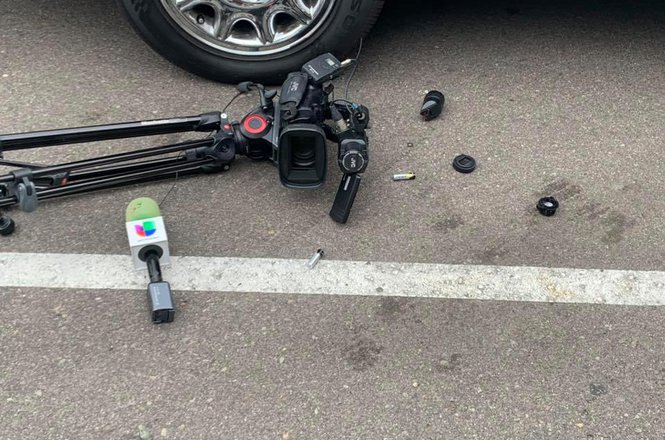 A La Mesa, California, business owner was arrested after altercations with several news crews on Jan. 20, 2020. The man …

San Diego Union-Tribune reporter Andrew Dyer was shot with pepper balls while he was documenting protests in La Mesa, California, on May 31, 2020.Protests that began in Minnesota on May 26 have spread across the country, sparked by a video showing a police officer kneeling on the neck of George Floyd, a black man, during an arrest the day before. Floyd was later pronounced dead at a hospital.Dyer told the U.S. Press Freedom Tracker that he was covering a protest … 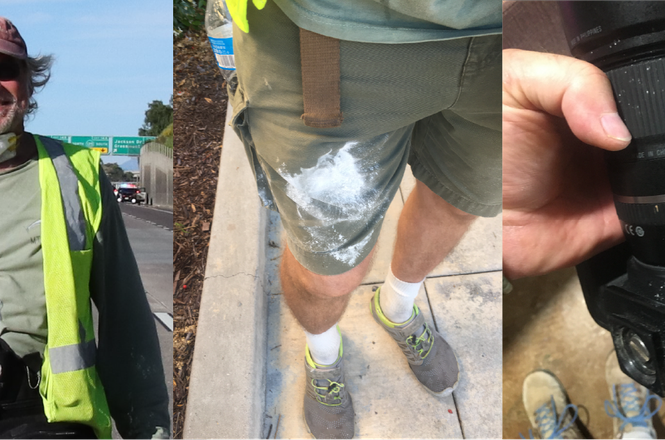 Guardian reporter thrown to the ground during protest at L.A.’s Wi Spa

Guardian reporter Lois Beckett was pushed to the ground by protesters around the Wi Spa in Los Angeles, California, on July 17, 2021.The spa, located in L.A.’s Koreatown, became a flashpoint for anti-transgender demonstrators as the result of a viral video which police are now treating as a hoax, Slate reported. Beckett was covering protests and counter protests around the spa on Wilshire Boulevard.Beckett, a senior reporter at the Guardian’s West Coast bureau, said on Twitter that she was thrown …
More related incidents