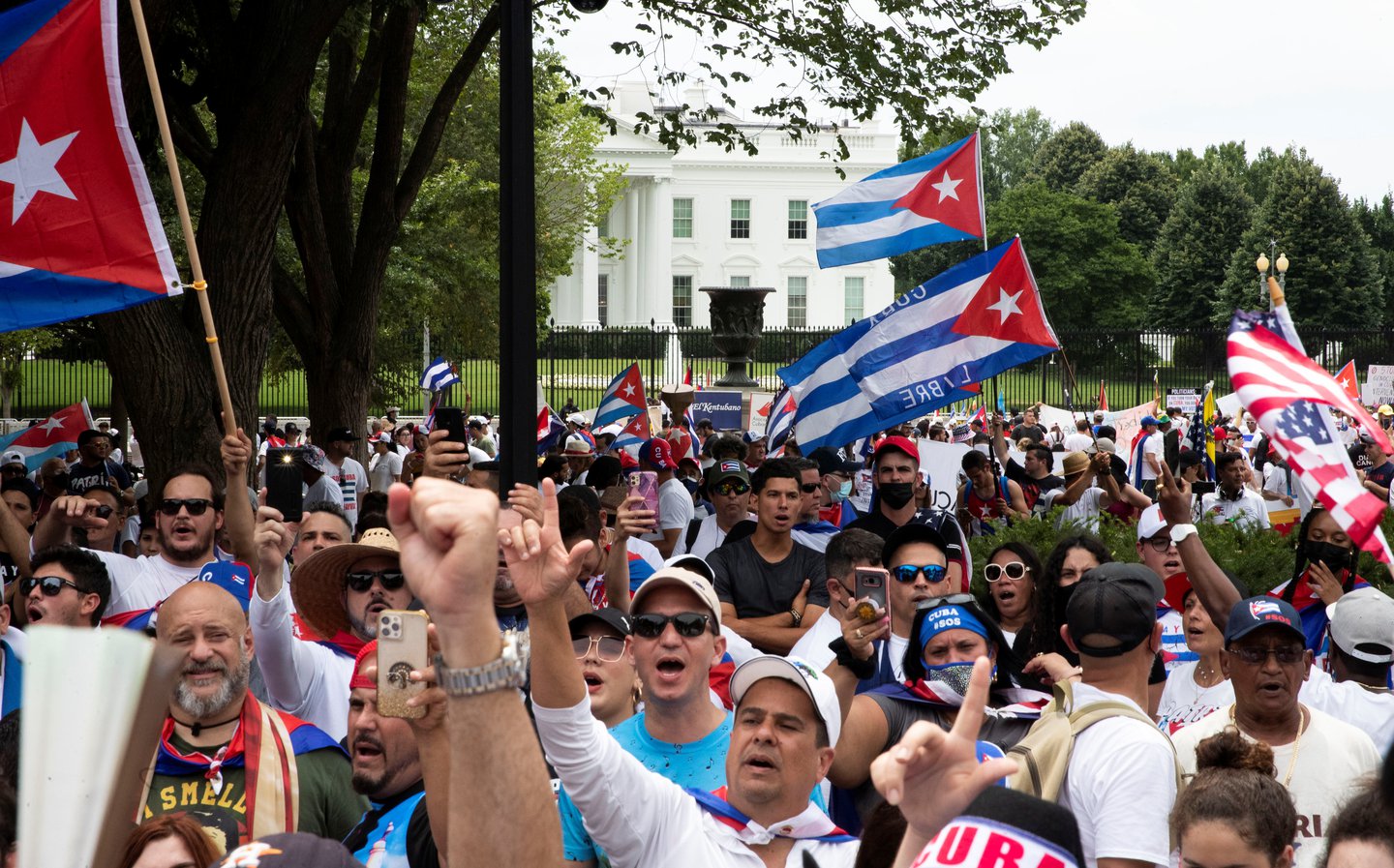 Protesters in Washington, D.C.’s Lafayette Square park call for the support of protesters in Cuba on July 26, 2021. While broadcasting from the demonstration, a news crew for Polish television station TVN Discovery was chased out of the park.

Cameraman and journalist for Polish TV station chased from D.C.’s Lafayette park during protest for Cuba

Cameraman Marcin Wyszogrodzki, who works for the Polish TV channel TVN Discovery, was trying to film a live broadcast from Lafayette Square in Washington, D.C., on July 26, 2021, when members of the public prevented his team from broadcasting and threw objects at them.

Wyszogrodzki told the U.S. Press Freedom Tracker that just before 11 a.m., members of the public in the park began making it difficult for him to film the TVN journalist Marcin Wrona and screaming at both him and Wrona.

Normally, Wyszogrodzki said, they would walk away and film somewhere nearby, but in this case the angry people continued to follow them, he said.

“It was something unusual. It never should happen when you are doing your work,” he said.

“I felt like it was coming to the point when it might turn out very badly for us,” he said.

One of the assailants had ripped a wire from the back of the camera and someone threw water at them and their equipment, but the camera was not damaged. Only a wire was missing, he added.

Wrona told the Tracker that the crew had been covering a U.S. State Department-sponsored declaration calling for freedom in Cuba, signed by the United States and 19 other countries, and a protest against government repression in Cuba.

“First we were approached by an individual with a bullhorn who was yelling something in Spanish straight in our microphone and camera. I asked him to stop doing it as the viewers would not be able to hear a word of our reporting. We moved a few steps over,” Wrona said.

“Later a group of about five people lined up behind my back, blocking the view with their raised signs. I asked them to lower the signs because we would not be able to show how big the protest is.”

As he was about to go on air, the crowd started “yelling something in Spanish and telling us that we were not welcome there. They started physically pushing us out of the park,” he said, confirming that they were prevented from doing the broadcast. Wrona said the equipment displayed the station logo and Wyszogrodzki was carrying press identification.

When the TVN crew decided to pack up and leave, the crowd started punching them, grabbing equipment, spraying water on them and throwing bottles and other objects at them. The Tracker documented Wrona’s assault here.

They managed to get across H street, still being chased by the crowd, and went towards two Metropolitan Police officers on a bicycle patrol. The officers tried to hold back the crowd using their bikes and then called for backup. Finally about 10 officers escorted them to safety, Wrona said.

“We covered at least three or four blocks and the crowd was still attacking us. Finally the police decided to get us into their squad vehicle and their lieutenant drove us away, although her car was followed by some Cubans.”

TVN is often described as the last independent news channel in Poland.

Wrona also said that there had been some “horrible” follow-up personal attacks on social media, stoked by people spreading false information.

Journalist Marcin Wrona, a U.S. correspondent for the Polish TV channel TVN Discovery, was filming a live broadcast on July 26, 2021, from Lafayette Square in Washington, D.C., when members of the public stopped the broadcast and started to throw objects at Wrona and his cameraman, Marcin Wyszogrodzki.Wrona told U.S. Press Freedom Tracker in an email that individuals in the park repeatedly interrupted their broadcast, which was covering a declaration sponsored by the U.S. State Department calling for freedom in …