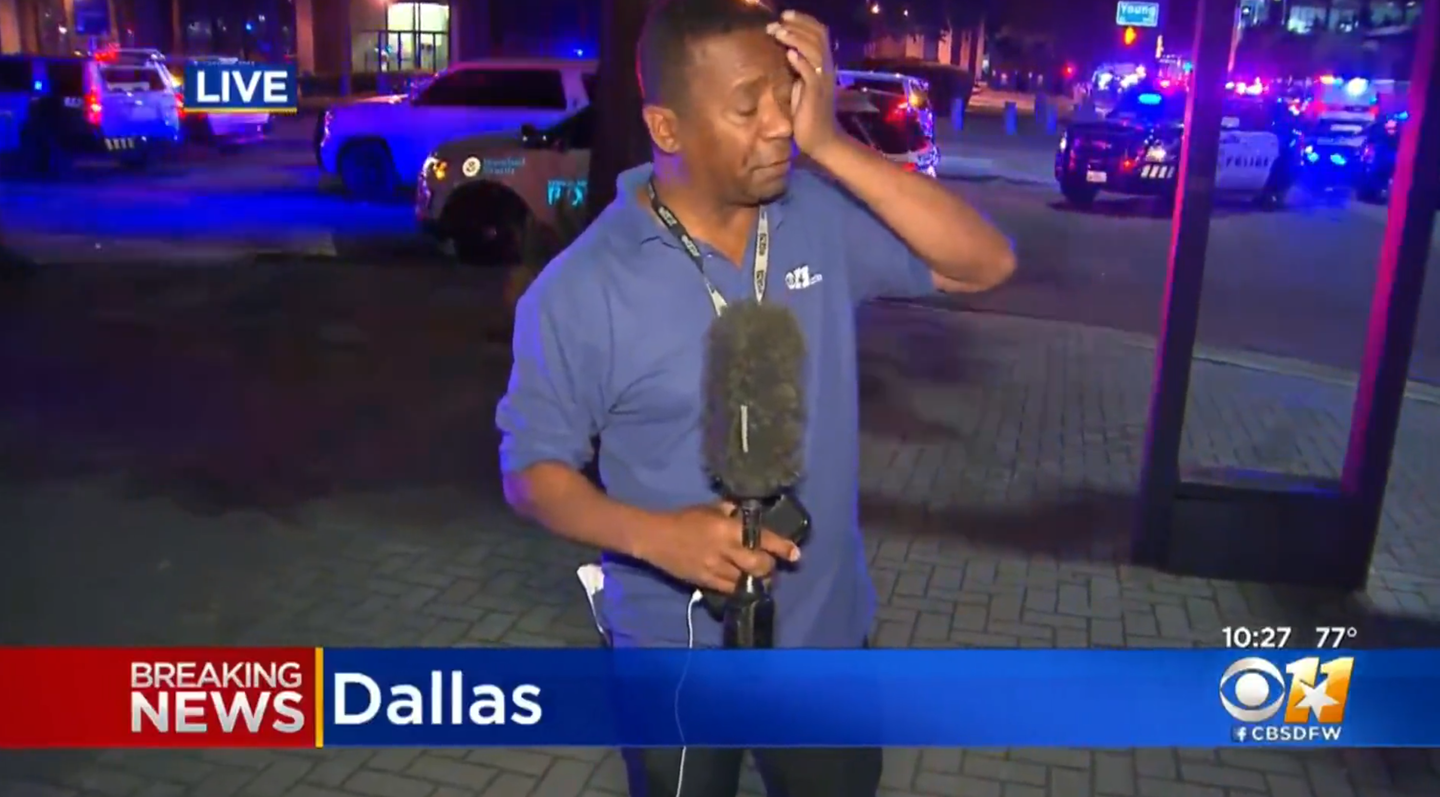 CBS 11 reporter Steve Pickett wipes tears from his eyes after an officer targeted his Dallas news crew just prior to starting a live broadcast on May 29, 2020.

As CBS Channel 11 prepared to go live in Dallas, an officer tossed a tear gas canister toward the news crew

A news crew with CBS Channel 11 covering protests in Dallas was forced to scatter when a police officer tossed an activated canister of tear gas at two journalists as they were about to go live on air on May 29, 2020.

Reporter Steve Pickett and photojournalist Bret Kelly were stationed in downtown Dallas covering protests. At around 10:15 p.m., they were getting ready to begin their live shot. Typically, the station would have alerted them both, but they had only one working earpiece so Pickett told Kelly aloud, Kelly told the U.S. Press Freedom Tracker.

Kelly believes that a Dallas police officer standing 10 feet away overheard him, because as soon as they went live, the officer threw a tear gas canister right at their feet.

"We got gassed pretty hard and took flight a little bit," Kelly said. The Tracker has documented Kelly’s assault here.

Pickett can be seen on CBS 11 video struggling to breathe and find a way out of the area where the gas was deployed. "I’m trying to get out of the tear gas, this is killing us," Pickett says to the studio journalist as his eyes visibly water and he stumbles his way out of the cloud. He tells his colleague that earlier that night he was also threatened with arrest.

An interview request sent to Pickett was not immediately returned.

Kelly wrote about the experience on Twitter the next day, saying “ … I was nowhere near any protesters. Definitely a conscious decision by that officer.”

An emailed request for comment sent to the Dallas Police Department about the incident was not returned.

Freelance reporter Marina Trahan Martinez was targeted with foam projectiles and tear gas fired by police while covering protests in downtown Dallas, Texas, on May 30, 2020.The protests were sparked by a video showing a police officer kneeling on the neck of George Floyd, a black man, for 8 minutes and 46 seconds during an arrest on May 25. Floyd was pronounced dead at a local hospital.Trahan Martinez told the U.S. Press Freedom Tracker she was reporting on assignment for …

Pete Freedman, the co-founder and editor of the Dallas alternative news site Central Track, was hit with a flash-bang grenade while he was reporting on a protest in the Texas city on May 30, 2020.The protest against police brutality and racial injustice in Dallas was one of many held across the country in response to a video of the police killing of George Floyd during an arrest in Minneapolis on May 25.Demonstrators gathered outside City Hall in Dallas early in …
More related incidents