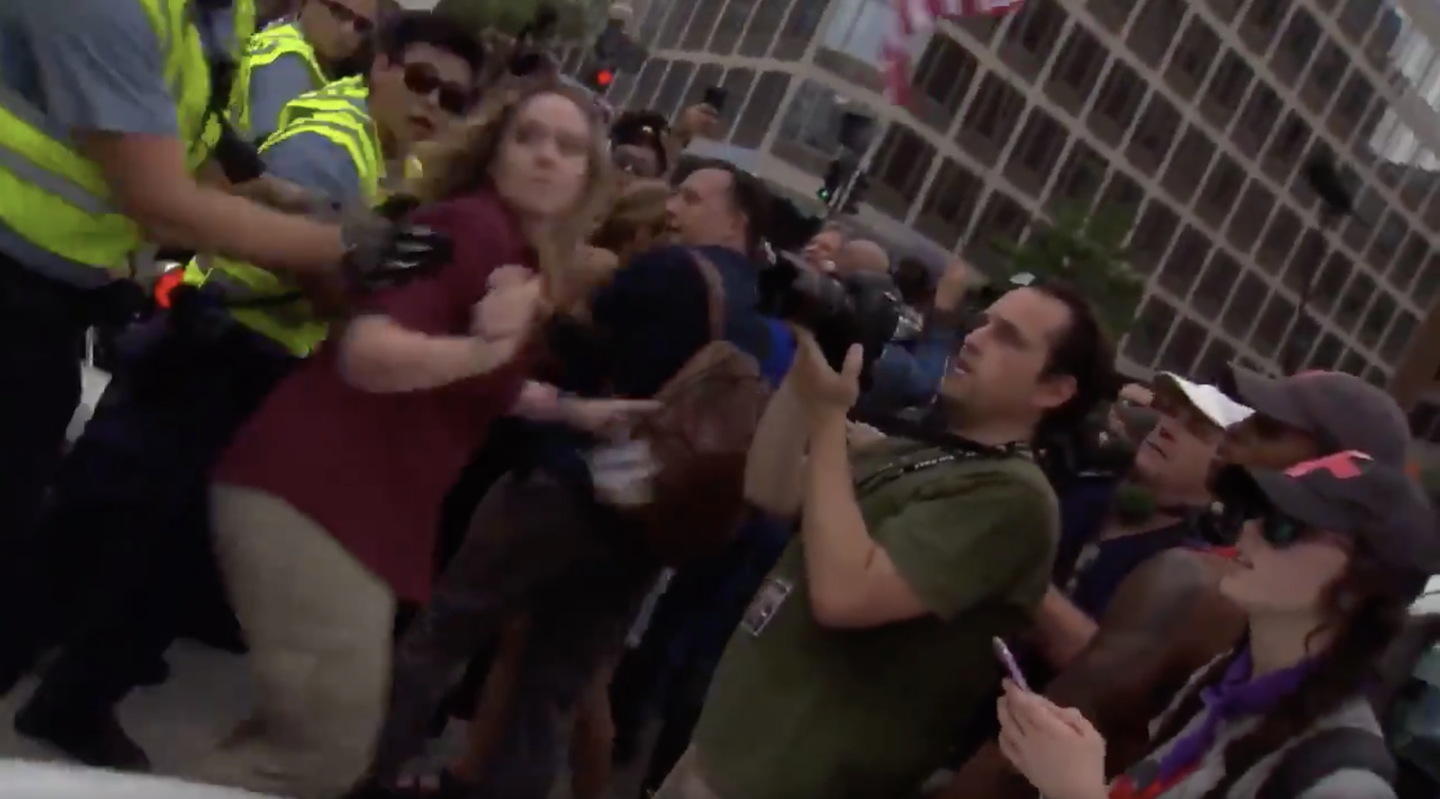 CBS News producer Christina Ruffini was shoved by police officers while reporting on a far-right protest in Washington, D.C., on Aug. 12, 2018.

Metropolitan Police Department officers "kettled" a group of protesters and journalists, including Ruffini, forcing them into a small, contained area with no exits. As lines of MPD officers continued to shove them backwards, the group found themselves pushed up against the side of an MPD police car.

"Guys, there's a car here," Ruffini can be heard yelling in the video. "Stop pushing! Stop pushing, you're hurting people!"

Officers then grab Ruffini and shove her next to the MPD car.

Ruffini said that she showed the officers her press badge, which identifies her as a journalist, but that did not stop them from manhandling her.

In which @DCPoliceDept shoved us up against a police car, trapping and crushing people, then I showed them my press badge (which you can see in my hand) and they shoved me anyway. Most officers did a great job today. This was not great. pic.twitter.com/qNOADlzzF2

Here’s where police unnecessarily kettled media and shoved everyone on their way out. Nbd, but if we’re getting righteous about this from afar, the only people to push me were cops. pic.twitter.com/zcPWof3XuT

While covering the Unite the Right II protest in Washington, D.C., on Aug. 12, 2018, freelance photojournalist Shay Horse was shoved against a police van and hit in the face by a police officer.Horse told Freedom of the Press Foundation that police interfered as he and other members of the press followed a group of protesters, including white supremacist Jason Kessler, as they moved from Foggy Bottom to the White House.“When we got there, police starting shoving everyone because they …

Ford Fischer, co-founder and editor-in-chief of News2Share, was struck by a crowd control munition and detained by Metropolitan Police Department officers while on assignment for digital wire service Zenger covering protests in Washington, D.C., on May 31, 2020.The protest was one of a surge of demonstrations across the country, sparked by the May 25 death of George Floyd, a Black man, during an arrest in Minneapolis.Fischer, whose video news service focuses on "the latest on politics and activism,” told the …

Freelance photojournalist Craig Ruttle was documenting a far-right protest in Washington, D.C., on Aug. 12, 2018, when a police officer charged at him and body-slammed him.Ruttle was covering the white supremacist rally Unite the Right II for Newsday. Ruttle tried to photograph a group of approximately 20 white nationalists, who emerged from the Foggy Bottom metro station and were soon surrounded by Metropolitan Police Department officers. “The scene was chaotic,” Ruttle told Freedom of the Press Foundation, describing the way …