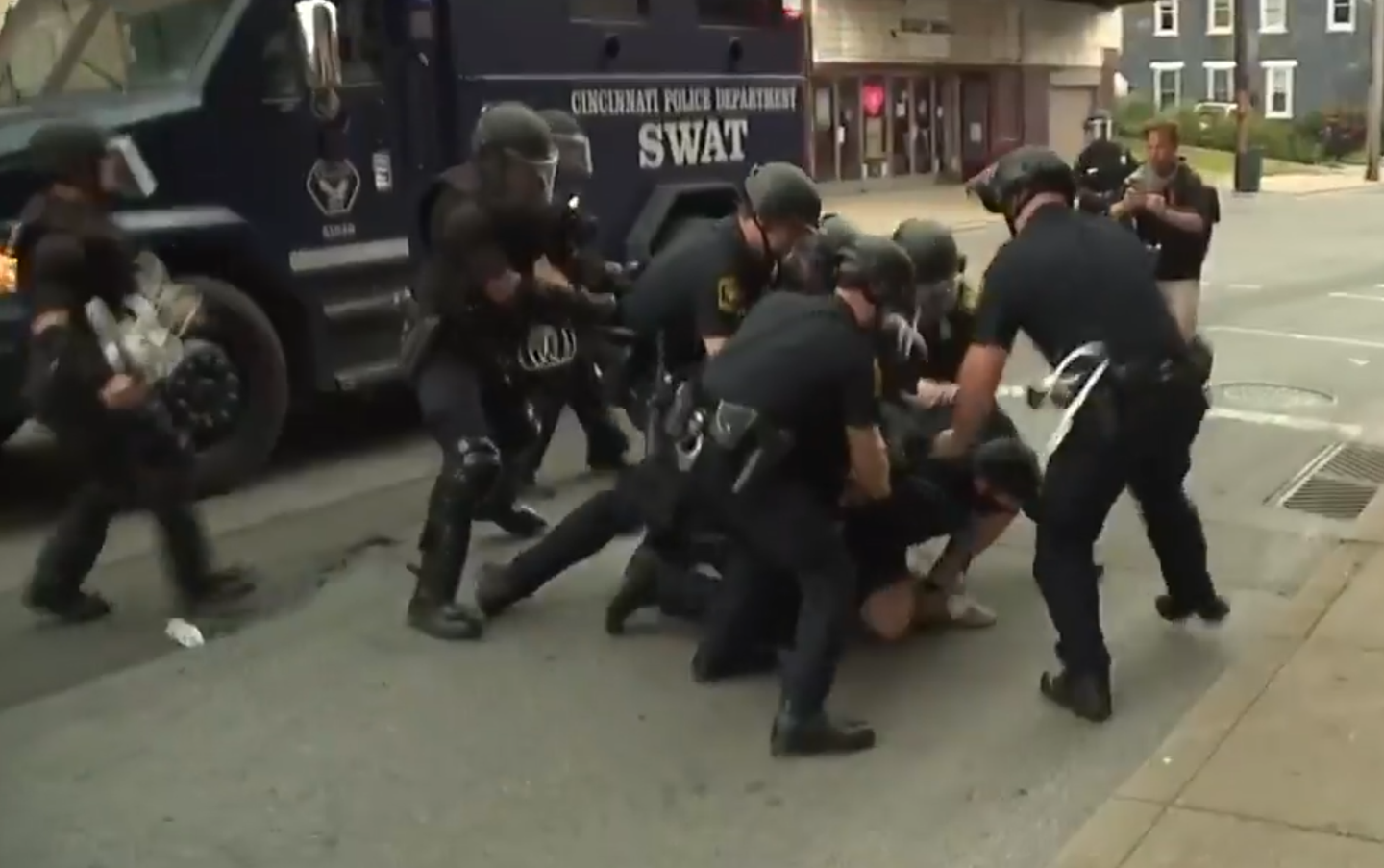 Brennan told the Tracker that he normally covers professional soccer but has reported on many police scenes in his career. With a short staff due to furloughs, he was recruited to help cover the protests that swept through Cincinnati and the rest of the nation after the death of George Floyd in Minneapolis police custody on May 25.

Cincinnati police began to enforce a curfew shortly after 8 p.m., the paper reported. A video provided by Brennan shows a SWAT vehicle advancing as a loudspeaker blares warnings to leave the streets or face arrest. Protesters run away from the police line. Brennan decided to stay put, identify as a journalist, and let the police pass, he told the Tracker.

His colleague Maddie Mitchell told the Enquirer that Brennan was separated from the group and she called out to him to rejoin. But he suddenly disappeared from view as he crossed behind a police vehicle.

Brennan had crossed behind the vehicle on the orders of the police, his video shows. Brennan records police arresting two people. One officer tells Brennan to “do what you want but back up.” Brennan says he is trying to reconnect with his crew. An officer says to go on the other side of the vehicle. So Brennan crossed to the other side of the street and sought a way to reconnect with his colleagues, he told the Tracker.

The detention was captured in two videos filmed by other media present.

Courtney Francisco, a senior journalist with the local ABC affiliate WCPO, posted on her social media a video that begins moments before police took Brennan into custody.

In the video, two police officers warn Francisco and the WCPO crew to leave the area. “Sir, we are with the news,” she says. “I know but we need space,” one officer responds before warning her again to get back.

Within a minute, the camera swings towards a commotion and records at least seven officers taking Brennan to the ground. As an officer pulls out plastic restraints to cuff Brennan, Francisco gets quickly caught up herself. The two police officers who previously warned her begin shoving her backwards. The officers force the crew around the corner of a building and out of sight of Brennan.

“They were pushing very hard and very fast. I couldn’t keep up,” she says to the camera.

Nick Swartsell, a journalist on furlough from the Cincinnati CityBeat, posted a video on Twitter showing Brennan walk by a police SWAT vehicle toward the police line. Police officers stop Brennan, who is wearing a mask, goggles, and a badge around his neck. A police loudspeaker blares “He’s been told” before the officers take him to the ground.

Brennan told the Tracker he did his best to avoid face-planting as one officer stuck his leg out to trip him. He collapsed to the ground with the officers, who shoved his cheek into the pavement and cuffed him. Police then brought him to a wall where others were being held.

The police released Brennan from custody without charge after 30 minutes, according to the Enquirer.

That night Brennan said on Twitter that he had a “respectful conversation” with Cincinnati’s chief of police, Eliot Isaac. Brennan told the Tracker that Isaac arrived on scene and immediately went to apologize to Brennan.

The police department apologized on Twitter for “any inconvenience” regarding Brennan’s detention and Francisco’s removal from the area. According to Swartsell, Isaac said Brennan “got mixed up in the crowd,” claiming he was wearing goggles and a mask without an obvious ID.

Lt. Steve Saunders, a spokesman for the Cincinnati police department, told the Tracker on June 10 that the department had entered ongoing conversations with media outlets to help better identify journalists and ensure they can report while not interfering in police operations. “If we can do things better, we want to do things better,” he said, while insisting that this applies to journalists, too.

Cincinnati Mayor John Cranley also apologized on Twitter, calling the arrest a “big mistake” and stating that reporters are crucial to democracy.

Francisco and Swartsell did not respond to emailed requests for comment.