Spencer Wilson, a reporter for local CBS affiliate KKTV 11, was pepper sprayed by police while covering a protest in Colorado Springs, Colorado, on June 2, 2020.

Wilson had been covering the protest in front of the Colorado Springs police headquarters with a KKTV photographer, Jon Modic, all day, and broadcast much of the demonstrations on Facebook Live. The pair were reporting from a barricade in front of the police headquarters, where about 75 people were protesting and about 40 police officers were standing on the other side, Wilson told the Committee to Protect Journalists.

At around 10:30 p.m., an announcement came over a loudspeaker informing the crowd that the protest was no longer peaceful, and that protesters needed to leave. Wilson heard the same announcement while covering protests the previous night, June 1. On both nights, the announcement angered the crowd, Wilson said, and he saw bottles being thrown at police officers.

At this point, Wilson was standing with Shawn Shanle, a photographer for FOX 21, and he began moving back as officers with riot shields moved toward the crowd. Wilson estimated no more than two minutes passed between the dispersal order and the police moving in on the crowd. Then, fireworks exploded and police shouted, “That was not us!” Officers then began pepper spraying the crowd.

“I’m walking away from the police. I turn around to start walking backwards, like I’m in a marching band, while I’m holding up my camera on my shoulder,” Wilson said. “A police officer, who is on the very edge of the line, just randomly sprays pepper spray as if it was silly string.”

Wilson said the officer looked directly at him when he sprayed from about 10 yards away. “It was directly aimed at me and that photographer and it wafted over to us and went directly into us.”

Wilson said he was clearly identifiable as a member of the media. He had a large camera on his shoulder, was dressed in a suit and tie, and was wearing a media I.D. on a lanyard.

Wilson also had visited the police station earlier in the day to ask where journalists should report from, and where they should move to in the event of a dispersal. When told to disperse, Wilson walked in the direction the police had told him to go earlier in the day.

After he was sprayed, Wilson turned the camera at the police, repeated that he was media, and asked the officer why he sprayed. Wilson says the officer was silent, and continued chasing after protesters who were walking away. Wilson didn’t get the name of the officer, and said he didn’t know whether he had been targeted as a member of the press.

After being sprayed, Wilson said he was separately hit with tear gas deployed by police. A police officer led Wilson — coughing and with eyes stinging from the chemicals — away from the street. He used a water bottle given to him by a protester to wash out his eyes and finished reporting at around midnight.

A spokesperson for the Colorado Springs Police Department declined to comment on the incident, but said the department worked with the media to address safety concerns. The department also said on Twitter that demonstrators are ordered to disperse only when protests turn violent.

In a message sent to members of the media on June 3, the Colorado Springs Police Department said, “Please know that you are never targeted because you are press. When officers are working to safely disperse a crowd, they cannot differentiate media in the crowd (as many protestors also have cameras), and are working to disperse everyone present.” The message goes on to ask reporters to wear clothing that clearly identifies them as press, and that journalists have their credentials on them at all times.

The next day, Wilson’s boss bought goggles and reflective vests for journalists to wear for future assignments, so police could more easily identify them. Wilson said he went back to the Colorado Springs police headquarters and told officers about the vests.

“The officers I spoke with laughed and said, ‘It’s not going to help.’ I was taken aback.” 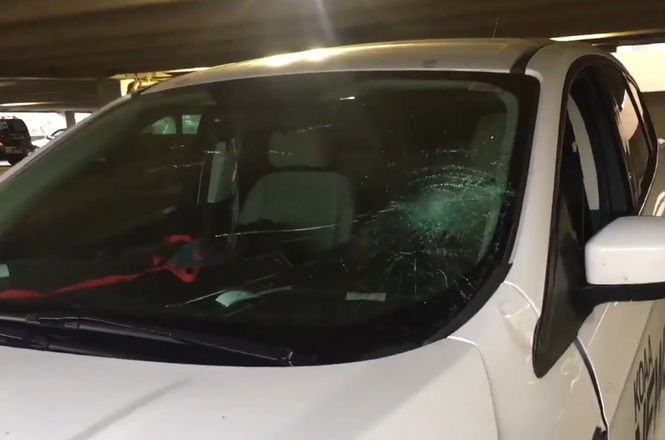 Denver Post reporter Alex Burness was hit by a pepper ball and foam projectiles while covering protests in Denver, Colorado, …

Johnathen Duran, the content editor at Colorado-based Yellow Scene Magazine, said he was hit in the groin by a rubber bullet while he livestreamed from a Black Lives Matter protest in Denver on May 31, 2020.Duran, who writes under the name De La Vaca, told the U.S. Press Freedom Tracker he was at the intersection of Colfax Avenue and North Pearl Street at around 9:30 p.m. when a police officer shot at him with a rubber bullet.“I was shot in …
More related incidents