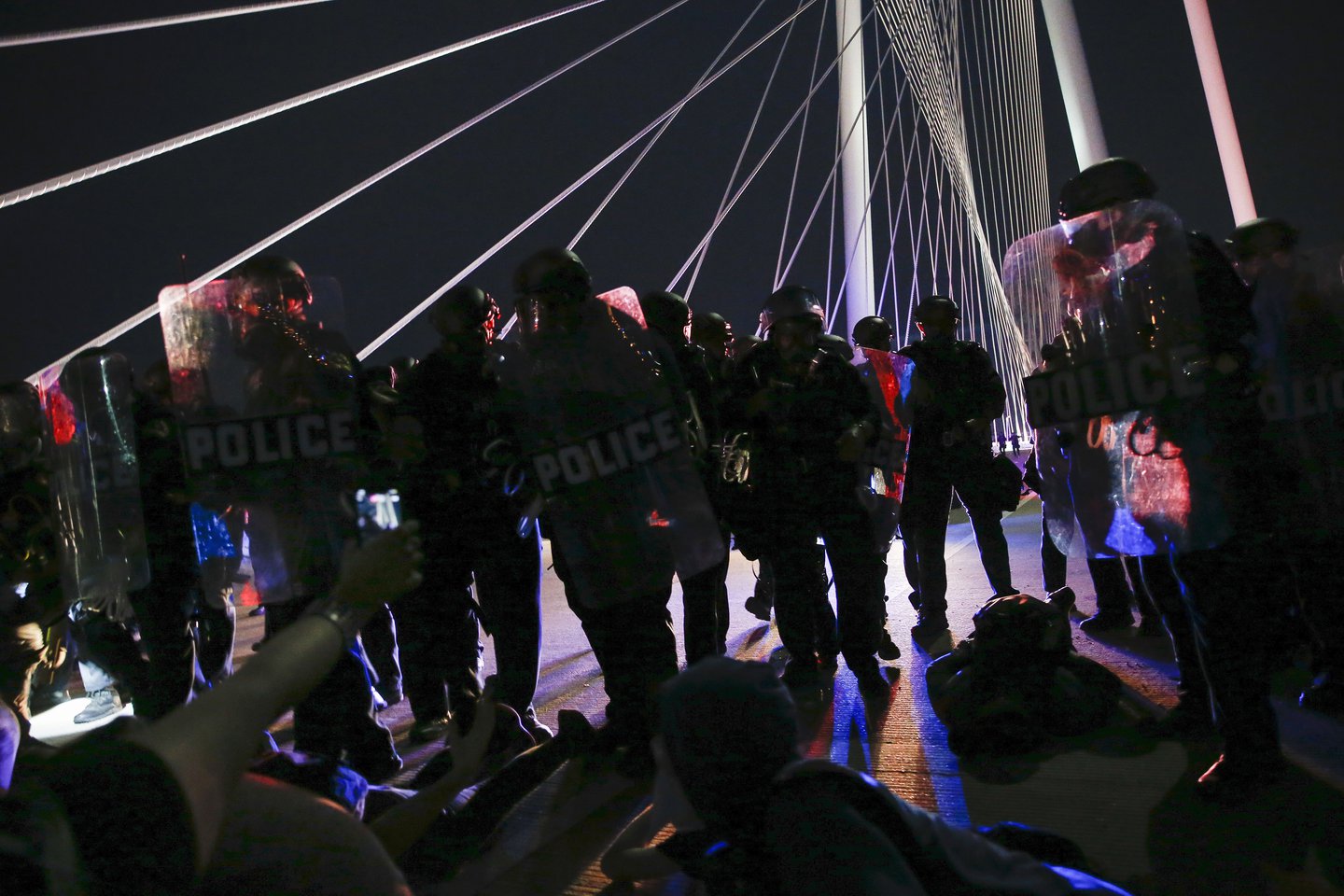 Police surround and detain hundreds of protesters on the Margaret Hunt Hill Bridge in Dallas, Texas on June 1, 2020. Dallas Morning News staff photojournalist Ryan Michalesko, who captured this image, was hit with a projectile while reporting.

A newspaper photographer was struck in the thigh by a foam round while documenting protesters hemmed in by law enforcement on a bridge in Dallas, Texas, on June 1, 2020.

June 1 marked the second night of downtown Dallas’ 7 p.m. curfew, from which journalists were expressly excluded.

At around 9 p.m., Ryan Michalesko, a staff photojournalist at the Dallas Morning News, was photographing a group of several hundred protesters who’d marched from the county courthouse to the Margaret Hunt Hill Bridge, an architectural landmark that spans the Trinity River and connects downtown and west Dallas.

A police line began to form across the bridge, Michalesko told the U.S. Press Freedom Tracker in an email. “Over their speakers they ordered the protesters to stop moving forward and turn around. At this point many of the protesters took a knee with their arms in the air,” he wrote. Police then deployed canisters of smoke into the crowd, followed by tear gas.

Police in gas masks and riot gear began advancing on protesters from both sides of the bridge, employing a technique known as “kettling” to hem them into a small area. As protesters came to realize what was happening, Michalesko turned toward them, exposing his back to police, he told the Tracker. “I knew at that moment it was important I find a way to capture the fear in people’s eyes as they found themselves trapped,” Michalesko wrote.

As he took photos, he regularly looked back over his shoulder at police. “This is when I was struck with a less-lethal round in the back of my upper thigh. I felt it hit, realized what had happened as I watched the blue-tipped projectile bounce across the ground,” he continued.

Michalesko was wearing press credentials, holding a camera and had another camera around his neck. But the shot came from 25 feet away, he estimated, putting him too far from police to be identifiable as press. He was unable to identify to which agency the officer who fired the shot belonged.

Police then began to command everyone on the bridge to lie down on their stomachs, before firing foam rounds and other projectiles. “I could tell they were aiming these at the ground near people’s feet,” he wrote. Michalesko complied with police commands and continued to snap photos of the moving line from his stomach. “I also felt like the officers were at this point still too far away for me to face them and attempt to declare myself as press. I had already been hit once and didn’t want it to happen again,” he wrote.

When he saw an officer nearby, he shouted, “I am a photojournalist with the Dallas Morning News. Don’t shoot!” He then asked if he could stand up and continue to take photographs. According to Michalesko’s recounting, the officer said yes, before adding the caveat, “But if I tell you to move, you need to move quick.”

Michalesko continued to work, filming and photographing the scene as police zip-tied protesters’ hands and lined them up. He observed members of the Dallas Police Department, state troopers from the Texas Department of Public Safety, National Guardsmen and FBI agents as protesters were being detained and processed.

Police have surrounded the protesters on the Margaret Hunt Hill Bridge and are arresting everyone. @dallasnews pic.twitter.com/OtnOvPE6wl

Some 674 protesters on the bridge were cited with obstructing a freeway and released, the Dallas Morning News reported, but those charges were all later dropped.

When he returned home, Michalesko was able to inspect his bruise, describing it as “black, blue, and about the size of a baseball.” It remained sore for a full week, making sitting uncomfortable, he said.

Whatever you want to call it: rubber bullet, foam bullet, less-lethal ammunition. I was hit in the rear with this on the bridge Monday night as I was caught between the police line advancing from the west and protesters. It still hurts to sit. https://t.co/GgWzpzvh6y pic.twitter.com/IX9kqd1Tqu

A slideshow of Michalesko’s photos from the evening can be seen here.

Melinda Gutierrez, a spokesperson for the Dallas Police Department told the Tracker, “Not having specific details from the person involved and taking in to account the atmosphere, it’s challenging to provide a comment about an incident that is unfamiliar.” A spokesperson for the Texas Department of Public Safety wrote in an email that the agency “did not use any less lethal projectiles (e.g. rubber munition) during the protests on the Margaret Hunt Hill Bridge on June 1.” The Texas National Guard did not return an emailed request for comment as of press time.

Freelance reporter Marina Trahan Martinez was targeted with foam projectiles and tear gas fired by police while covering protests in downtown Dallas, Texas, on May 30, 2020.The protests were sparked by a video showing a police officer kneeling on the neck of George Floyd, a black man, for 8 minutes and 46 seconds during an arrest on May 25. Floyd was pronounced dead at a local hospital.Trahan Martinez told the U.S. Press Freedom Tracker she was reporting on assignment for …

Pete Freedman, the co-founder and editor of the Dallas alternative news site Central Track, was hit with a flash-bang grenade while he was reporting on a protest in the Texas city on May 30, 2020.The protest against police brutality and racial injustice in Dallas was one of many held across the country in response to a video of the police killing of George Floyd during an arrest in Minneapolis on May 25.Demonstrators gathered outside City Hall in Dallas early in …

Two Dallas Morning News reporters said a Texas state trooper rolled a can of tear gas at them while they covered protests in downtown Dallas on May 30, 2020.The protests were sparked by a video showing a police officer kneeling on the neck of George Floyd, a black man, for 8 minutes and 46 seconds during an arrest on May 25. Floyd was pronounced dead at a local hospital.On May 30th, Dallas Morning News reporters Jesus Jiménez and Corbett Smith …
More related incidents