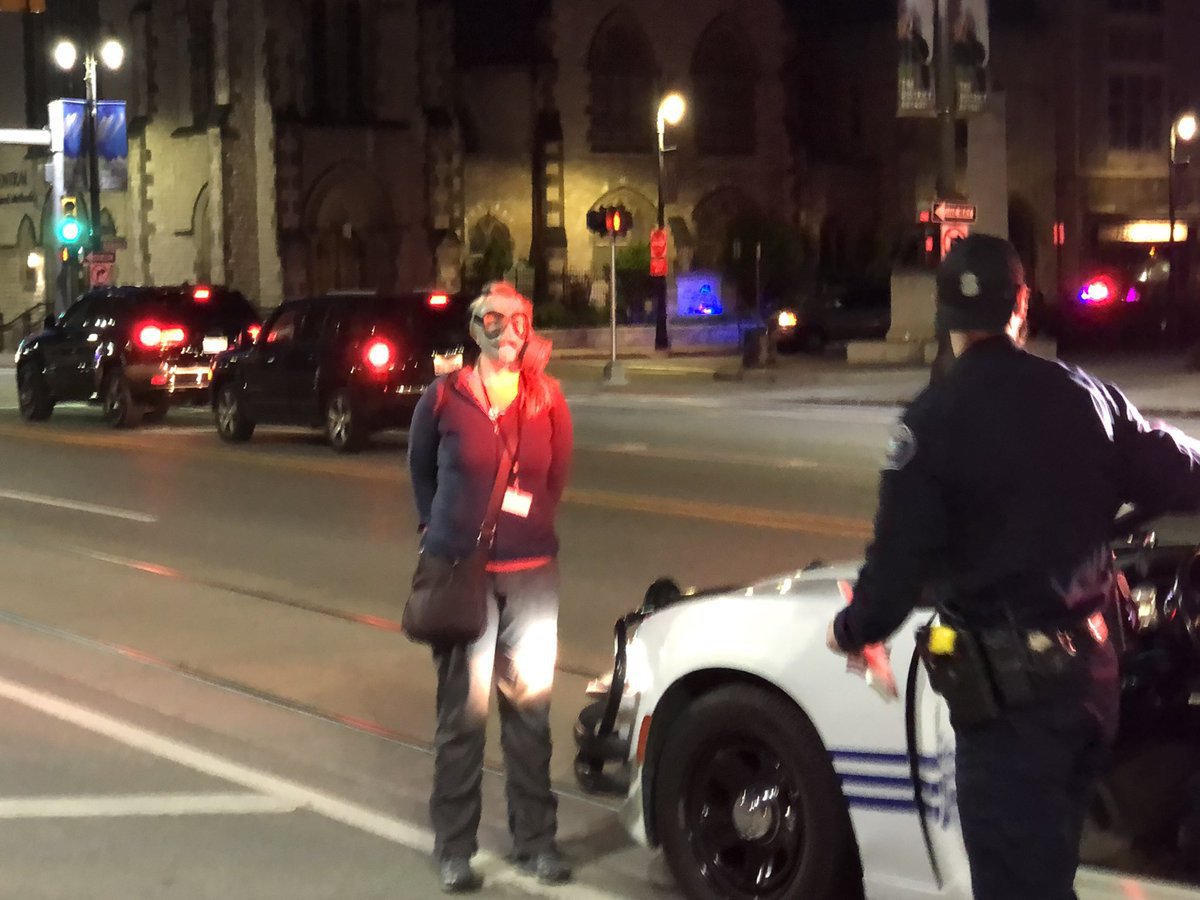 Detroit News reporter Christine MacDonald stands handcuffed in a gas mask as a Detroit police officer verifies her credentials on May 31, 2020.

Detroit News journalist captures her own detention on livestream

The protests were held in response to a video showing a white police officer kneeling on the neck of George Floyd, a Black man, during an arrest in Minneapolis, Minnesota, on May 25. Floyd was pronounced dead at a local hospital. Protests against police brutality and in support of the Black Lives Matter movement have been held across the U.S. since the end of May.

Detroit braced for the third night in a row of protests on May 31. MacDonald told the Tracker she volunteered to help that night in part because the newsroom was short-staffed due to furloughs. For the first time in her career, she grabbed a gas mask from the newsroom.

MacDonald followed hundreds of protesters marching through the city, but the situation grew tense as an 8 p.m. curfew fell, she said. Around 9 p.m., police fired tear gas to disperse the crowd, according to news reports.

About thirty minutes later, MacDonald saw a couple people running in Grand Circus Park near Woodward Avenue, she said. A police officer tackled one of them to the ground. MacDonald filmed the apparent arrest by livestreaming from her phone. She filmed from a distance to not interfere.

Suddenly without warning, the livestream picks up the sound of ratcheting handcuffs from behind. A voice asks, “Who are you with?” MacDonald was being detained.

“It happened very quickly. There was no conversation,” MacDonald said. “As soon as I noticed someone behind me is when I felt my hands being brought to the back.”

She told the Tracker she tried to follow a colleague’s advice on what to do if detained: check your ego, identify yourself, and try to sort it out.

MacDonald identified herself as a journalist and said she had her press credentials around her neck.

“I had that gas mask on but I could still talk,” MacDonald said. “It wasn’t like he couldn’t hear me. He could hear me through that mask.”

The officer escorted MacDonald to his patrol car on Woodward Avenue and told her to stand at the front of the vehicle, MacDonald said.

MacDonald’s livestream, obscured by her handcuffed hands reflecting the blue and red of police lights, continued to broadcast as the officer checked her credentials.

On the way out of the park, the officer asked someone else who had a camera if MacDonald was with him, she told the Tracker. The person said no.

Eli Newman, a reporter and producer for NPR-affiliate WDET, told the Tracker he was walking with a group of about a half-dozen journalists for safety when he saw a woman in a gas mask walking handcuffed to a police vehicle.

The group was not immediately sure if she was a journalist or not, Newman said. But Newman thought he recognized MacDonald. So he shouted to confirm and she nodded her head. Realizing she was a colleague, the journalists tried to vouch for her with the police officer.

A video filmed by Detroit Free Press journalist Mark Kurlyandchik shows the police officer examining MacDonald’s credentials hanging around her neck. Someone off camera says “We all know her!”

Newman said he believed the journalists’ intervention helped ensure her release. MacDonald said the officer did not acknowledge the journalists, but they were vocal and he was likely aware that they were filming the interaction.

The officer asked MacDonald twice if she planned to go home after her release due to curfew, she told the Tracker. MacDonald said she would continue reporting as she was exempt from the curfew.

The officer told MacDonald that he believed her and joked about helping the police out next time by tripping people running away after throwing bottles at them, MacDonald told the Tracker.

The officer released MacDonald less than three minutes after he detained her.

It is not clear why the officer immediately handcuffed MacDonald before interacting with her. MacDonald told the Tracker that she had identified herself as a journalist to police prior to the incident.

“There was no reason to detain me,” MacDonald said. “Earlier in the night, officers asked me who I was and when I responded who I was, they had no problem leaving me to my job, but this officer didn’t even have a conversation with me before putting the cuffs on.”

MacDonald said she did not ask the officer to identify himself, and the Detroit police did not respond to a request for comment about the detainment.

Speaking about MacDonald and other incidents involving journalists that night, Sgt. Nicole Kirkwood, also a department spokesperson, told Detroit News, “we take every allegation seriously” and “the vast majority of the men and women in the department do get it right.”

After May 31, the Detroit police began issuing daily, color-coded press passes to journalists to facilitate the identification of journalists in protests, MacDonald and Newman told the Tracker.

MacDonald debriefed with the other journalists following her encounter with police. “My editor is yelling at me because my hand was in front of the camera,” she said in her still-broadcasting livestream. “Well yeah, because I was arrested.”