Detroit News reporter Jordyn Grzelewski was assaulted by police officers and forced to the ground while covering protests against police violence in Detroit, Michigan, on June 2, 2020.

Grzelewski told the U.S. Press Freedom Tracker that she had been following protesters as they marched through downtown that evening. As the city’s 8 p.m. curfew approached, Grzelewski was reporting along Gratiot Avenue between Conner Street and Outer Drive, documenting the scene on Facebook Live.

In the video, a line of police officers in riot gear can be seen marching along the street and ordering protesters to disperse or be subject to arrest. Grzelewski was standing on the sidewalk between protesters and the police when an officer approached her.

“They told me that I was in their way, grabbed my hands and started to put them behind my back and take me to the ground,” Grzelewski said.

In the video, an officer can be heard telling her to get down, to which Grzelewski replies that she is a member of the press. The officer asks for her press pass, and she says she has it in her hand. She is then released by the officer.

Press passes had been issued daily to journalists in the city and were printed with a brightly colored background.

Grzelewski said that the assault was over quickly, but she was still prevented from doing her job.

“In all, it was just, you know, a few seconds, but it happened,” she said. “It was a short encounter and they did not detain me in any lengthy way but they did attempt to do so.”

Grzelewski said an officer then directed her and other members of the media to get back from the street where protesters were being arrested and detained. She said they were “shepherded” into the parking lot of a nearby Family Dollar.

“They kept telling us to get back, and I said something like, ‘I’m just trying to do my job.’ And he was very insistent, saying, ‘No, you have to stand back,’” she said.

Grzelewski continued her livestream from the parking lot, documenting as officers arrested or attempted to arrest protesters. Grzelewski confirmed that reporters were not detained, and were free to leave the scene entirely through the other end of the parking lot, but had to remain there in order to continue to report on the protest and arrests underway.

“Certainly it felt like I could not get closer to where the arrests were taking place, because the police were basically ordering us to stay away from the area,” she said.

The Detroit Police Department did not respond to multiple requests for comment as of press time.

Protests in the city that day were in response to a video showing a white police officer kneeling on the neck of George Floyd, a Black man, during an arrest in Minneapolis, Minnesota, on May 25. Protests against police brutality and in support of the Black Lives Matter movement have been held across the United States since the end of May.

A news crew from WIVB in Buffalo, New York, was struck by crowd-control munitions fired by police while covering protests in the city on June 1, 2020, the same night a Buffalo protester was tackled and forcibly arrested by police while giving an on-camera interview. The demonstrations that evening were part of a wave of protests resulting from a viral video showing a Minneapolis police officer kneeling on the neck of George Floyd, a Black man, during an arrest on …

A news crew from WIVB in Buffalo, New York, was struck by crowd-control munitions fired by police while covering protests in the city on June 1, 2020, the same night a Buffalo protester was tackled and forcibly arrested by police while giving an on-camera interview. The demonstrations that evening were part of a wave of protests resulting from a viral video showing a Minneapolis police officer kneeling on the neck of George Floyd, a Black man, during an arrest on … 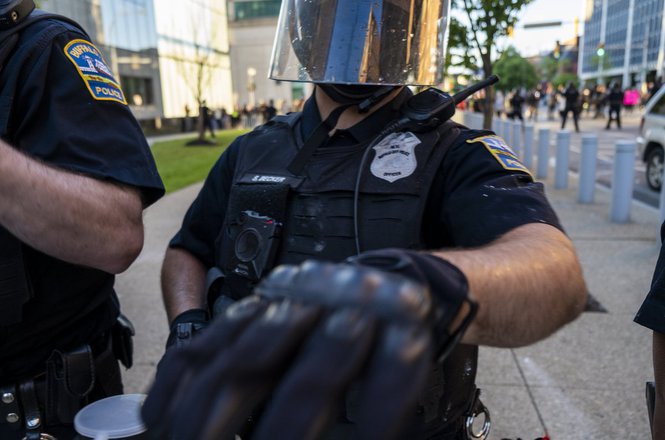