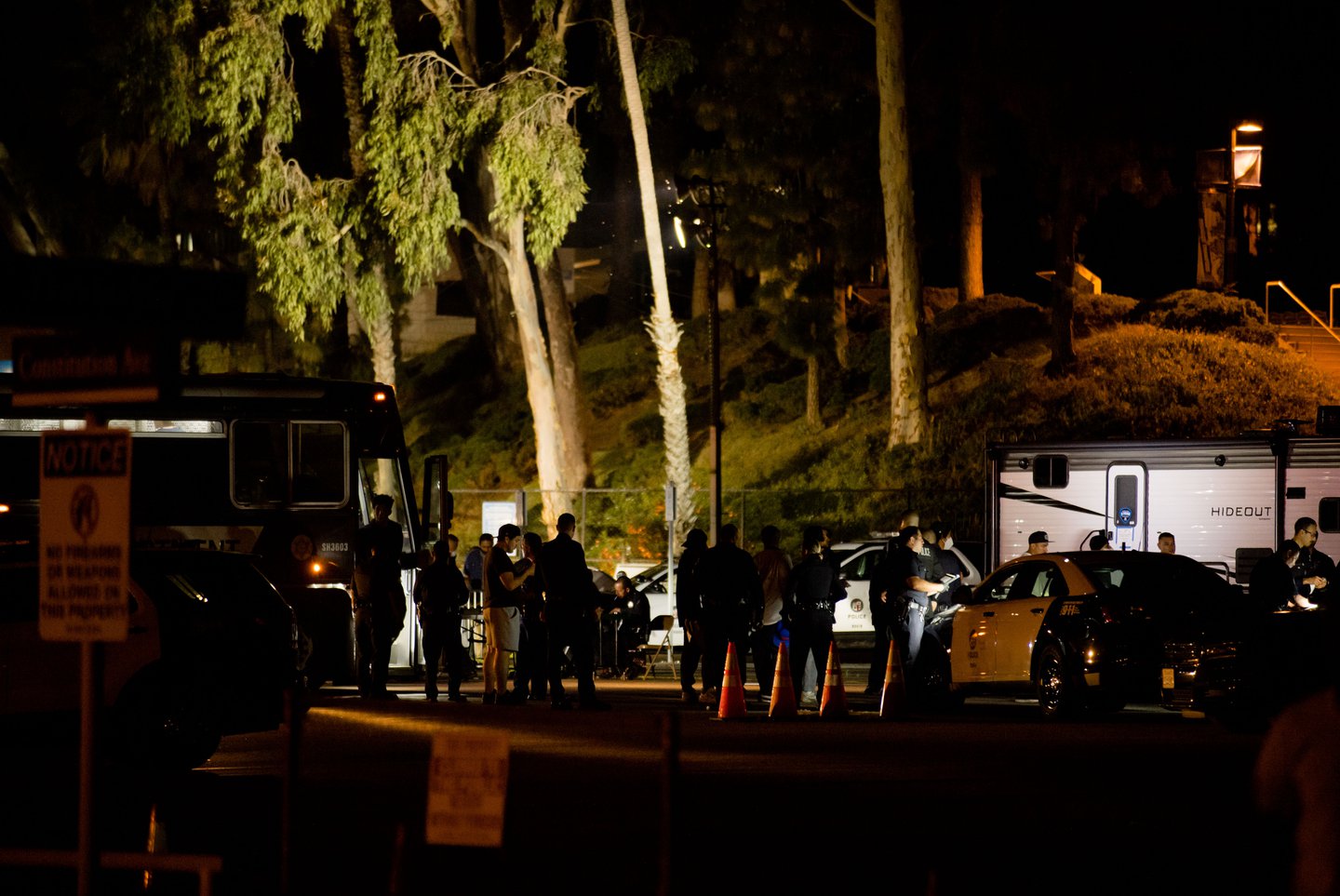 Freelance photojournalist Robert Spangle captured this image of a Los Angeles processing center seen from the parking lot of UCLA’s Jackie Robinson Stadium shortly after his arrest on June 1, 2020.

Freelance photojournalist Robert Spangle was arrested while covering protests against police violence in Los Angeles on June 1, 2020, he told the U.S. Press Freedom Tracker. Spangle’s exploration of fashion in the protests was published in British GQ and Achtung Digital.

The protests were held in response to a video showing a white police officer kneeling on the neck of George Floyd, a Black man, during an arrest in Minneapolis, Minnesota, on May 25. Floyd was pronounced dead at a local hospital. Protests against police brutality and in support of the Black Lives Matter movement have been held across the U.S. since the end of May.

As part of the protests, hundreds of demonstrators marched down Sunset Boulevard on June 1, according to news reports. But after a 6 p.m. curfew, the majority of protesters began to disperse, Spangle said. He decided to head back toward his car.

Along the way, Spangle realized that law enforcement had begun to block streets, trapping protesters and Spangle on Schrader Boulevard near a parking lot just north of Sunset Boulevard. Fear and confusion took over the block, Spangle said.

“This is kettling and we’re getting locked in here,” Spangle recalled thinking. “The thing to do is go out and loudly identify yourself as press.”

Spangle, who was wearing a helmet with the word PRESS on it, stepped into the middle of the street with a badge identifying him as press in one hand and his camera in the other.

“At the top of my voice, I very loudly announced, ‘Hey I’m a journalist,’” Spangle said. “‘What do you want me to do, officer?’”

But he received no response. Six or seven times he said he tried to the same effect. So Spangle turned and approached another line of officers in the same way. Five or six times more he identified as a journalist, he said. But still, there was no response. Spangle was trapped.

Shortly before 9 p.m., two officers approached Spangle and ordered Spangle to get on his knees and put his hands on the back of his head, he told the Tracker. He was then zip-cuffed.

“I let them do their thing,” Spangle said. “I said, ‘Hey sir, please look at my press badge. I’m here as a journalist. I’m covering the event. I’m complying.’” He told the Tracker that he tried to draw on his military experience to respond in a calm, professional manner to resolve what he assumed was a mistake.

Officers brought Spangle to a fence where they were gathering others that had been arrested, he said. Spangle asked a journalist on the other side of the fence, which was outside the police cordon, to contact his editor at GQ about his arrest.

After about thirty minutes, Spangle said he was taken to a transport vehicle along with other people who had been arrested. Officers performed a search of Spangle’s possessions and confiscated a small camera bag. But they left his cameras, press badge, and phone with him, Spangle said.

Spangle said he never heard an officer acknowledge his repeated attempts to identify as a journalist. “I think there were efforts for those kinds of things to not be said out loud,” Spangle said.

As he got on the bus, he asked an officer to inform the supervisor he is a journalist, Spangle told the Tracker. The officer responded, “All I can say to you is you’ll be alright,” Spangle said. Spangle interpreted the answer as evidence that a bad command decision had been made to arrest everyone in the area, journalist or not.

The bus drove around the city for hours, stopping at two other locations, until stopping to process the arrestees shortly before midnight at the parking lot of UCLA’s Jackie Robinson Stadium, Spangle said. He was one of the last on the bus to be released on a charge of violating the Los Angeles County curfew.

The university later issued a statement saying it was "troubled" that the stadium was used as a processing center "without UCLA's knowledge or permission.”

Spokespeople for the Los Angeles County Sheriff’s Department and LAPD told the Tracker that they could not provide specific information on Spangle’s arrest because of the sheer number of arrests made during the protests.

On June 8, Los Angeles County District Attorney Jackie Lacey announced that she would not prosecute citations for violating curfew or failing to disperse, while Los Angeles City Attorney Mike Feuer said he would resolve cases involving peaceful protesters in a “restorative approach” outside of the court system.

On June 10, the LAPD said it had assigned 40 investigators to examine “allegations of misconduct, violations of Department policy, and excessive force during the recent civil unrest.”

Spangle said he did not feel any bitterness toward the officers who were following orders. “They were professional; they were courteous,” Spangle said. “They did the wrong thing but they did it professionally and in a courteous way.”

“Somewhere along the line there was a really bad call made,” Spangle said. He described it as, “press or whatever, it doesn’t matter, we’re arresting everyone.”

Rob Wilcox, a spokesperson for Feuer, told the Tracker that the office is in the process of sending thousands of declination letters to those arrested on curfew related charges. The letter says the office will use its prosecutorial discretion to not file criminal charges and invites the recipient to join a series of virtual conversations on law enforcement, bias, and injustice. Wilcox said 2,044 letters had been sent as of July 27 and the remainder will be sent by the end of the week.

Spangle said as of July 27 he had not yet received the letter.

Spangle was arrested on June 1 while covering protests against police violence in Los Angeles for violating the city’s 6 p.m. curfew order, which exempted members of the press.

On June 8, Los Angeles County District Attorney Jackie Lacey announced that she would not prosecute citations for violating curfew or failing to disperse. The City Attorney’s office confirmed to the Tracker on Dec. 10 that the curfew violation charge against Spangle was among the thousands the office declined to pursue over the summer.

Student journalist Emily Holshouser was one of at least four journalists detained while covering election-related protests in support of the Black Lives Matter movement in Los Angeles, California, on Nov. 4, 2020.Holshouser, who writes for California State University Northridge’s student publication The Daily Sundial, tweeted that she was covering a protest scheduled to begin at 6 p.m. outside City Hall in downtown LA.When the event dispersed at 6:30 p.m., Holshouser followed a small group of remaining demonstrators as they walked …
More related incidents