Reporter and activist Andrew Sheets voluntarily dropped his federal lawsuit against the City of Punta Gorda, Florida, on Nov. 26, 2019.

The suit argued that the trespass order issued to Sheets in December 2018 was unconstitutional, and sought injunctive relief. District Judge Sheri Polster Chappell denied Sheet’s motion for a preliminary injunction on Nov. 22, 2019. He filed a notice of voluntary dismissal a few days later and the case was formally dismissed on Dec. 2.

On July 12, 2019, Andrew Sheets filed a federal suit against the City of Punta Gorda, Florida, seeking injunctive relief and attorney fees. He wants his trespass order from December 2018 to be declared unconstitutional, when he was cited for videotaping public officials. The petition states that the ordinance violates the First Amendment rights of the journalist. Sheets told Wink News that he had deliberately acted against the order banning recording from City Hall since it was a violation of his civil rights.

On Aug. 28, 2019, the city filed for dismissal of the suit, with their attorney Nikki C. Day claiming that Sheets was issued the trespass citation under a regulation meant “to allow for the efficient rendering of public services while also maintaining a safe and orderly environment,” as reported by The Port Charlotte Sun.

In a separate case, Charlotte County, where Punta Gorda is located, enacted rules stating that if someone is videotaping on county property and is asked to stop, they must do so.

In April 2019, Sheets showed up at the old courthouse of Charlotte County, an office building for The Supervisor of Elections. He was recording secretarial staff when he was told to stop. After Punta Gorda police arrived at the scene, Sheets was again issued a trespass warning.

On Dec. 20, 2018, reporter and activist Andrew Sheets was cited for trespassing after filming inside the city hall building in Punta Gorda, Florida, in violation of a local ordinance.

Sheets, a member of the National Press Photographers Association, is a self-described “copwatch reporter” who runs a YouTube channel focused on police misconduct and corruption.

The local law that Sheets was accused of violating, Ordinance 1872-17, prohibits filming people without permission in certain areas of city-controlled buildings, including Punta Gorda City Hall and City Hall Annex.

“Except within the City Council Chambers, conference rooms, and other locations in which a public meeting is being conducted pursuant to a public notice, it shall be unlawful and a violation of this Ordinance to record video and/or sound within City-owned, controlled, and leased property, without the consent of all persons whose voice or image is being recorded. … Any person who refuses to cease the unconsented to video and/or sound recording, and refuses to immediately leave the premises following the request of the City Manager or his designee, shall be considered as a trespasser.”

On Dec. 20, Sheets used a body camera to record himself going to the Punta Gorda City Clerk’s Office and making a records request for a copy of Ordinance 1872-17. Sheets later posted the video recorded by his body camera on YouTube.

The video shows Sheets entering the City Hall Annex building and going to the city clerk’s office, where he makes a request for a copy of the ordinance. Two city hall staffers who appear on the video tell Sheets that they do not have their permission and film them and ask him to stop recording.

“You don’t have our permission to record us,” one of the staffers tells Sheets.

“You’re a public official in a public building,” Sheets replies.

“This is a staff area,” the staffer says. “It’s not a public meeting area.”

Later in the video, Sheets goes to the Punta Gorda police station and asks to speak with the police chief. An officer, later identified as Lt. Justin Davoult, then approaches him in the lobby to inform them that the police chief will not speak with him. Davoult also issues two trespass warnings to Sheets, which ban Sheets from returning to Punta Gorda City Hall and City Hall Annex for one year.

“Before we go any further, this is what we’re going to do,” Davoult tells Sheets in the video. “The chief’s not available to speak to you. OK, so this is what you’ve got. This is a trespass warning for City Hall and City Annex, OK, for both addresses over at City Hall. You are no longer to be at or on that property for a period of one year or you will face arrest.” 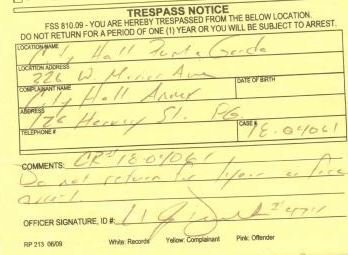 Sheets later filed a personnel complaint against Davoult, accusing him of “unlawful trespass issued.” The police department conducted an internal investigation, which cleared Davoult of any wrongdoing.

“The circumstances detailed on Dec. 20, 2018 confirmed that Andrew Sheets was in violation of the city ordinance,” the investigation report states. “This investigation has determined Lieutenant Justin Davoult’s actions were lawful, proper, and consistent with department policy and therefore is Exonerated from the allegation of unlawful trespass issued.”

Sheets believes that the prohibition on filming in Punta Gorda City Hall may be unconstitutional.

In April 2017, the Punta Gorda Police Department asked the Florida State Attorney’s Office to bring wiretapping charges against someone who had been caught filming inside the city hall building. The State Attorney’s Office declined to prosecute, explaining in a felony warrant request disposition notice that “a citizen’s right to film government officials, in the discharge of their duties in a public place is a basic, vital, and well-established liberty safeguarded by the First Amendment.”

The constitutionality of the city ordinance has never been tested in court.

Mickey Osterreicher, the general counsel for the National Press Photographers Association, told Freedom of the Press Foundation that the City of Punta Gorda may have violated Sheets’ First Amendment rights when it issued the trespass warning.

“Aside from being based upon a constitutionally suspect ordinance, the trespass notice issued to Mr. Sheets is a blatant violation of his First Amendment rights and chills his ability to gather and disseminate information on important matter of public concern,” Osterreicher said.

Melissa Reichert, a spokeswoman for the city, told The Port Charlotte Sun, a local newspaper, that the city believes the ordinance is valid and will continue to enforce it.

“The city has enforced Ordinance 1872-17 as provided therein since its adoption in May 2017,” Reichert told the paper. “Unless and until a court of competent jurisdiction determines otherwise, the city staff believes the ordinance is valid."