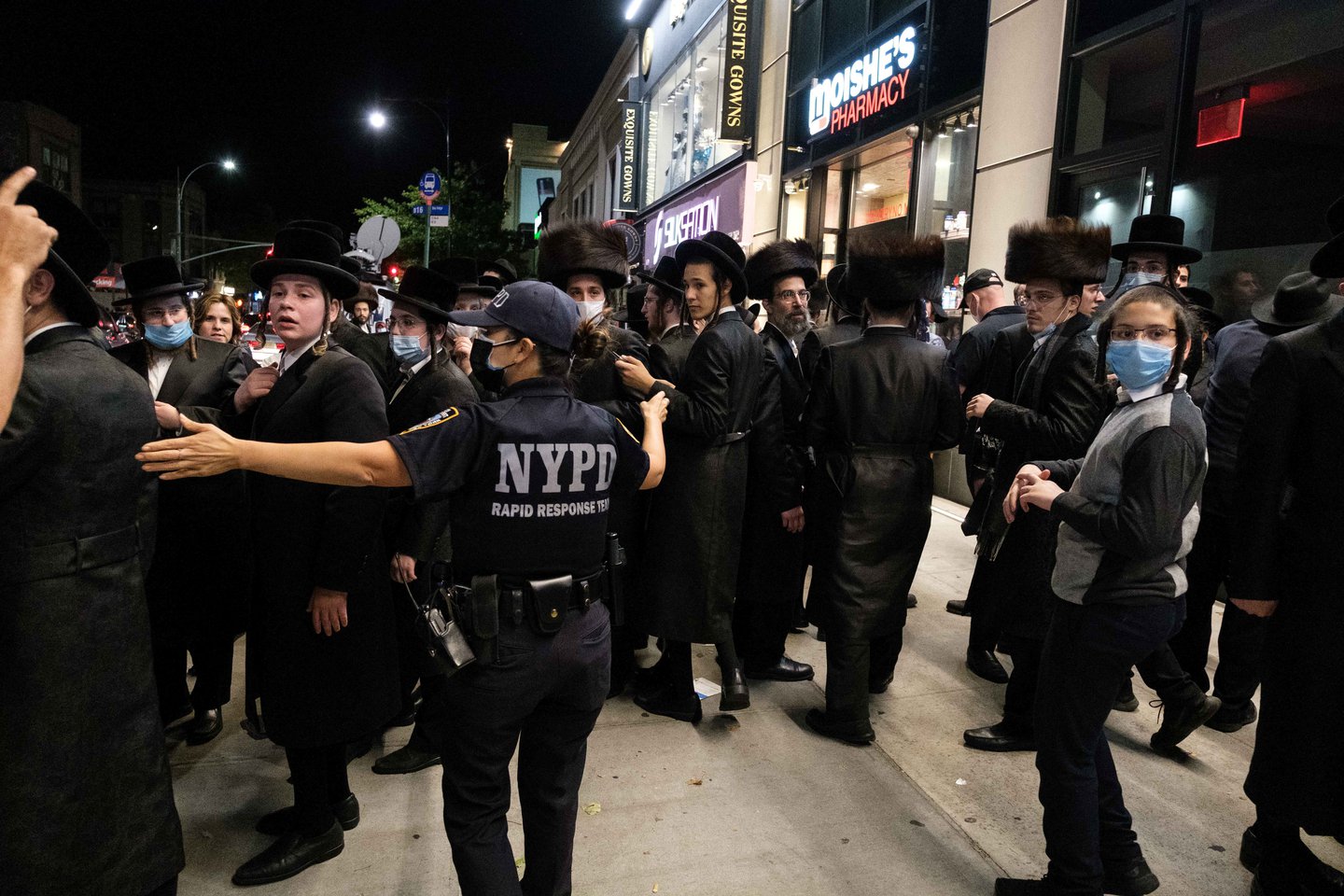 Protests erupted over new COVID-19 restrictions in areas with high infection rates, including this one in Brooklyn’s Borough Park on Oct. 7, 2020, where a reporter with Jewish Insider was assaulted by a crowd.

Jacob Kornbluh, national politics reporter for the national news outlet Jewish Insider, was assaulted by a crowd during anti-lockdown protests in the Brooklyn borough of New York on Oct. 7, 2020, according to tweets from Kornbluh and news reports.

Videos of the assault, which were posted on Twitter, show a group of men in clothing typically worn by members of the Orthodox Jewish community surrounding Kornbluh and pinning him against a wall while screaming “moyser,” or “snitch” in Yiddish.

Kornbluh wrote on Twitter and confirmed in a conversation with the Committee to Protect Journalists that he was “hit in the head and kicked by an angry crowd of hundreds of community members” that were calling him “Nazi” and “Hitler.” New York Police Department officers and several community members helped Kornbluh leave the crowd, according to Kornbluh’s tweets.

The New York Police Department arrested one of the anti-lockdown protest organizers, Heshy Tischler, on Oct. 11, and charged him with inciting a riot and unlawful imprisonment in connection with an assault of a journalist, according to New York state’s online court record system and a tweet from the NYPD.

Before his arrest, Tischler posted on Twitter that he would be pleading not guilty.

The protests were against New York Gov. Andrew Cuomo’s new COVID-19 restrictions on neighborhoods with high infection rates, including in Borough Park, where the incident occurred and where both Kornbluh and Tischler live, according to Haaretz.

Independent journalist chased, assaulted by mob during protest in Oregon

Independent journalist Alissa Azar tweeted that she was chased and assaulted by a mob of Proud Boys wearing helmets and carrying shields as she covered a protest in Olympia, Oregon, on Sept. 4, 2021.

Danny Rivero, a reporter for south Florida’s NPR and PBS stations, WLRN Public Media, was assaulted after taking a photo of anti-mask demonstrators in Miami, Florida, on Aug. 18, 2021.Rivero, who did not respond to messages requesting comment, wrote on Twitter he was covering protests against coronavirus mandates outside the Miami-Dade County Public Schools headquarters. At 6:45 p.m., Rivero said he had just been assaulted by a man he identified as a member of the Proud Boys, a violent far-right …

Frank Stoltze, a correspondent for the NPR station KPCC and LAist, was threatened, shoved and kicked while covering an anti-vaccine protest outside LA’s City Hall on Aug. 14, 2021.Demonstrators had gathered for a rally advertised as a “stop socialism, choose freedom march against medical tyranny” to protest COVID-19 vaccination requirements and mask mandates, Stoltze wrote in an account for LAist. Stoltze, who did not respond to an emailed request for comment, wrote that demonstrators carried pro-Trump flags, signs calling for …
More related incidents