A multimedia journalist for FreedomNews TV, was assaulted by individuals and had her camera smashed while covering a pro-law enforcement “Back the Blue” rally in the Brooklyn borough of New York on July 11, 2020. The rally was a response to continuing Black Lives Matter and anti-police brutality protests sparked by the May 25 police killing of George Floyd, a Black man, by police in Minneapolis, Minnesota.

The journalist, who publishes under the name Oliya Scootercaster, told the U.S. Press Freedom Tracker in an interview that she had been walking in the neighborhood of Dyker Heights with two other photographers when a man from the rally approached and asked, “Why does the media show fake information?” Moments later, she said, another person shoved her into a tree causing abrasions to her left elbow. She tweeted a photo of the wound.

This was the worst of it physically. Now need a new camera though. pic.twitter.com/f9oSfcrRPq

Scootercaster also tweeted a video from someone she identified as “the neighbor Zena P.,” writing, “The video filmed by the neighbor starts after they shoved me. She saw that happen and started recording.”

I am very grateful to the neighbor Zena P. who filmed it. pic.twitter.com/szfE9z3tvk

In the footage, a man can be seen grabbing the journalist's camera and swinging it at her, before it drops to the ground.

Scootercaster said on Twitter that the camera had “shattered,” and she told the Tracker that it had to be replaced.

Scootercaster said that police officers on bicycles, who’d arrived on the scene during the attack, initially refused to file a report, saying, “We didn’t see anything.” Once the bystander’s video was brought up though, they agreed, according to the journalist.

Following the rally, Scootercaster said her case was assigned to a detective with the New York Police Department. According to Scootercaster, he had not returned her emails or calls since July. The Tracker’s request to the department for comment was not returned as of press time.

The New York Office of the Deputy Commissioner, Public Information also did not respond to a request for comment.

Scootercaster said an assistant attorney general reached out to interview her about the incident. They have not responded to the Tracker’s request for comment.

In the aftermath of the assault, Scootercaster said she hopes for some sense of justice. “I just want to see that there’s accountability for people no matter which side they’re on,” she said. “I mean, it was very disheartening. I’m not on either side, I’m a journalist. I’m literally just documenting … it was just unpleasant from all sides.”

Independent videographer Melissa Lewis said she was doused with bear mace by individuals at a far-right protest while covering clashing demonstrations in Portland, Oregon on Aug. 22, 2020. Lewis, whose work has been published by Yahoo News, said she required medical treatment for injury from the chemical irritant.Clashes erupted between members of far-right groups and counter-protesters on Aug. 22 outside the Justice Center in downtown Portland, the Washington Post reported. Members of the extremist group the Proud Boys and supporters … 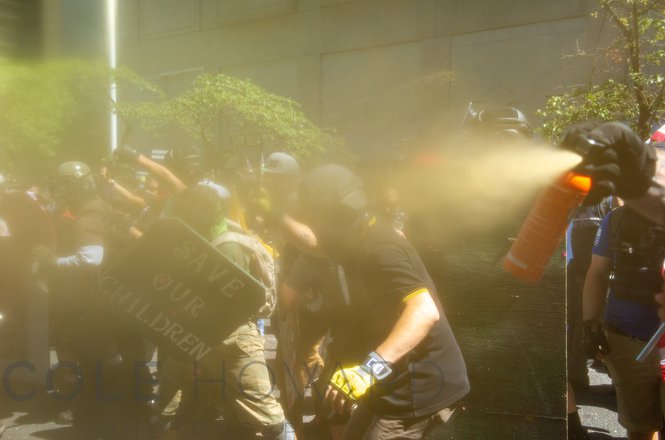 Journalist’s hand broken by assailant at ‘Back the Blue’ rally

An unidentified man attacked Bellingcat journalist Robert Evans with a baton, breaking bones in his hand, Evans said, as the journalist was covering demonstrations in Portland, Oregon, on Aug. 22, 2020.Clashes erupted after more than 100 far-right protesters, including members of the extremist group the Proud Boys and supporters of then-President Donald Trump, gathered outside the Justice Center for a “Back the Blue” rally on Aug. 22, the Washington Post reported. Hundreds of counter-protesters, including Black Lives Matter activists, amassed …