Journalist Ross Mosier was hit with a pepper ball and an unidentified crowd-control spray used by police officers while covering a protest in Omaha, Nebraska, on Nov. 22, 2020.

On the night of Nov. 22, protesters had gathered outside the central headquarters of the Omaha Police Department in downtown Omaha. The demonstrators were protesting against the Nov. 19 killing of a Nebraska man, Kenneth Jones, by a police officer, and demanding that authorities release body cam footage of the incident.

Mosier is a photojournalist working with Kualdom Creations, an independent media company based in Lincoln, Nebraska, that frequently livestreams protests in the state. He told the U.S. Press Freedom Tracker that shortly after 9 p.m. that night he got caught in the middle of a clash between police officers and a small group of counterprotesters. At one point, he was able to find a clearing in the crowd and began walking away from the skirmish, he said.

As he approached a street corner, he saw a group of police officers walking toward him, and one of them shot a pepper ball at his foot, Mosier told the Tracker. Mosier said the police officer yelled at him to get out of the way, so he turned to walk in another direction — but then felt what appeared to be tear gas or another irritant hit him in the face.

“I was out of the way and the police officers were behind me,” Mosier told the Tracker. “I was ten feet away in the opposite direction.” In footage of the incident reviewed by the Tracker, a police officer is shown firing a chemical irritant into a crowd and in Mosier’s direction. It’s not clear in the video whether the officer meant to deliberately target Mosier.

Mosier said he was carrying a camera and wearing a press badge but did not have an opportunity to identify himself to police as a member of the press. However, he said that he and the other journalists working with Kualdom Creations have had frequent run-ins with police officers. In July, Kualdom Creations founder Jazari Kual was detained and held for over an hour by Omaha police officers who doubted his professional status. He eventually was released without charge.

An officer with the Public Information Office of the Omaha Police Department told the Tracker in an email that the department was unaware of the incident and had not received any related incident reports or complaints.

Mosier said the irritant gas or spray left him unable to see for roughly half an hour as he tried to flush his eyes, so he left the protest and went home to continue treating his eyes.

Maya Saenz, a news anchor for Omaha-metro area CBS affiliate KMTV, said she was shoved by National Guard officers while covering a June 1, 2020 protest in Omaha, Nebraska, against police violence.Protests against police violence had spread across the country following the May 25 death of George Floyd. On June 1, demonstrations in Omaha also protested a decision by Douglas County Attorney Don Kleine to not charge a white bar owner, who had shot and killed 22-year-old Black man James …

Jessika Eidson, a reporter for CBS-affiliate KMTV, was hit by projectiles fired by police while reporting live on protests in Omaha, Nebraska, on May 30, 2020, according to footage of the incident.The protests were held in response to a video showing a white police officer kneeling on the neck of George Floyd, a Black man, during an arrest in Minneapolis on May 25. Floyd was pronounced dead at a local hospital. Protests against police violence and in support of the … 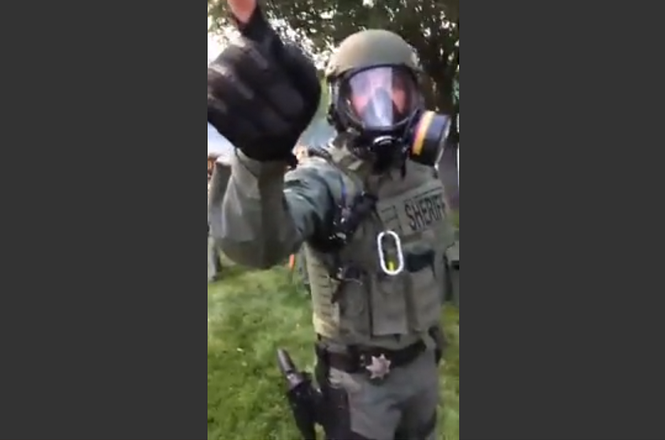