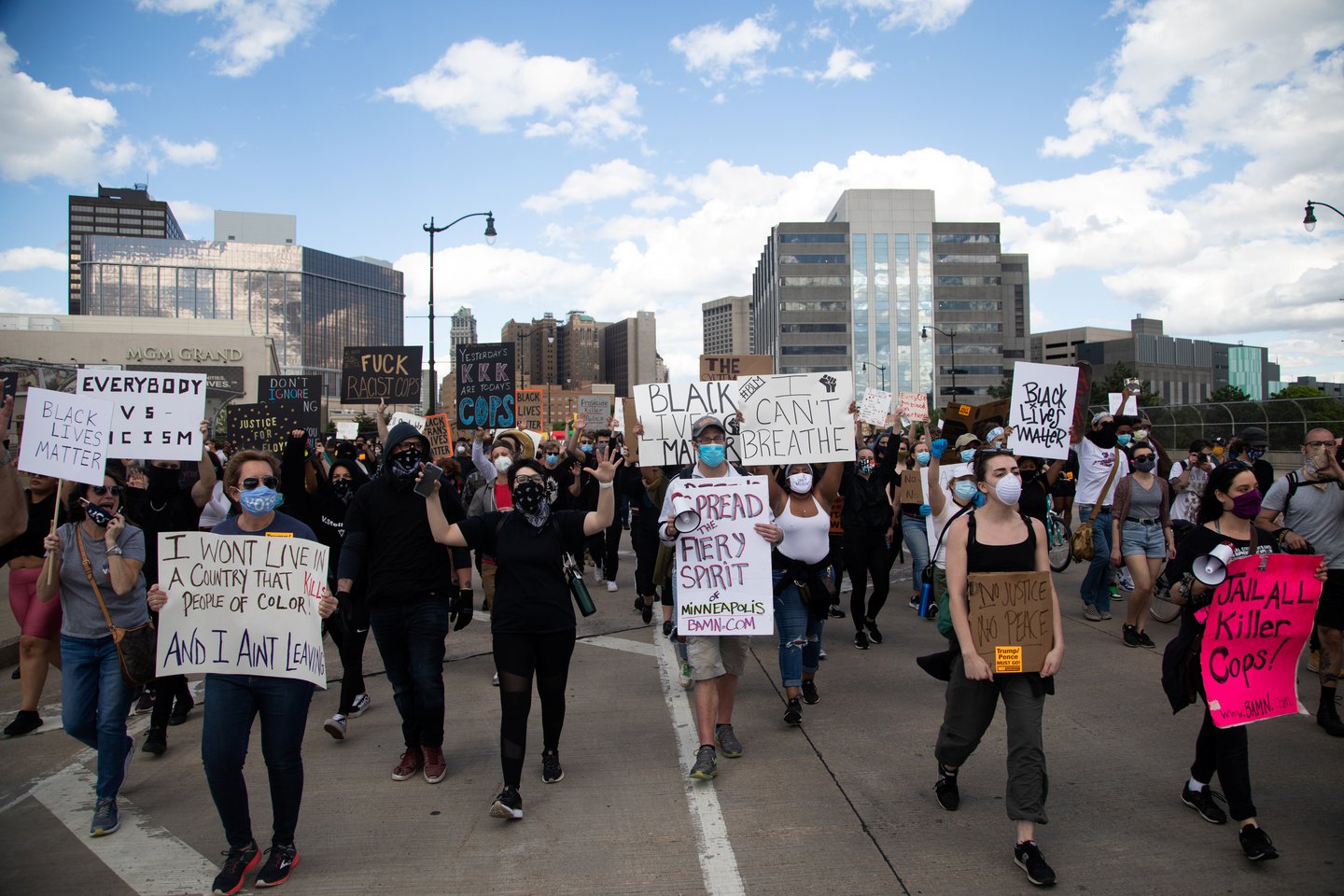 Three photographers documenting protests in Detroit, Michigan, on May 30, 2020, were assaulted with rubber bullet rounds fired by Detroit police while returning to their car around midnight, according to an article on the Michigan news website MLive and interviews with the Committee to Protect Journalists.

The journalists — Matthew Hatcher; on assignment for Getty Images; Seth Herald, on assignment for Agence France-Presse; and Nicole Hester, a staff photographer for MLive — encountered at least two officers while trying to return to their car in the Kennedy Parking Garage downtown, according to Hatcher and Herald. The photographers said they put their hands in the air and identified themselves as members of the press. They said they thought the police signaled that they could cross the street when the officers opened fire.

Hatcher sent pictures to CPJ that showed his injuries: a busted, bleeding lip and welts on his nose, forehead and torso.

Hester was hit with as many as a dozen pellets in the face, arms, legs and chest, leaving welts and narrowly missing an eye, according to the article by her employer.

After police fired on the journalists, Herald told CPJ, he asked one of the officers if he believed in freedom of the press. The officer answered that he didn’t know, Herald said.

According to the MLive article, one of the officers told Hester: “Maybe you’ll write the truth some day, lady!”

The three journalists then continued to the parking garage and passed another group of officers. One told them that if he saw their faces again, he would lock them up, according to MLive and interviews with Herald and Hatcher.

The trio arrived to find the parking garage locked and had to leave their car overnight, walking several blocks to get a ride-share home, Hatcher told CPJ.

On July 20, Detroit Police Corporal Daniel Debono was charged with three counts of felony assault for shooting non-lethal rounds at Hester, Herald and Hatcher, according to MLive.

In the article, the vice president of content for MLive Media Group said that they “are pleased that the Wayne County Prosecutor's Office investigated this thoroughly, and that this is moving forward toward justice."

The Detroit Police Department did not respond to phone or emailed requests for comment.

The protests that evening were in response to a video showing a white police officer kneeling on the neck of George Floyd, a Black man, during an arrest in Minneapolis, Minnesota, on May 25. Floyd was pronounced dead at a local hospital. Protests against police brutality and in support of the Black Lives Matter movement have been held across the U.S. since the end of May.

Detroit News reporter Jordyn Grzelewski and freelance photographer Sean Work were physically assaulted by police officers while covering protests against police violence in Detroit, Michigan, on June 2, 2020.Both journalists had been following protesters as they marched through downtown that evening. Grzelewski told the U.S. Press Freedom Tracker that as the city’s 8 p.m. curfew approached, she was reporting along Gratiot Avenue between Conner Street and Outer Drive, documenting the scene on Facebook Live.In the video, a line of police …

On the evening of June 2, 2020, Detroit police assaulted Steve Neavling, a journalist with the Detroit Metro Times who was covering protests against police violence, Neavling told the Committee to Protect Journalists in a phone interview.Neavling told CPJ that he and other reporters were watching a group of about 150 peaceful protesters along Gratiot Avenue on Detroit's east side when police surrounded the protesters and moved in on them. The journalist said that he was filming the scene when …

On May 31, 2020, while covering protests in Detroit, Michigan, Detroit Free Press reporter Mark Kurlyandchik was charged by a police officer, who knocked his phone out of his hands as he was filming, and told by another to leave the area where press were permitted, according to Kurlyandchik’s tweets from that day.Neither Kurlyandchik, the Free Press, nor the Detroit Police Department responded to the U.S. Press Freedom’s request for comment as of press time.According to Kurlyandchik’s Twitter feed, the …
More related incidents