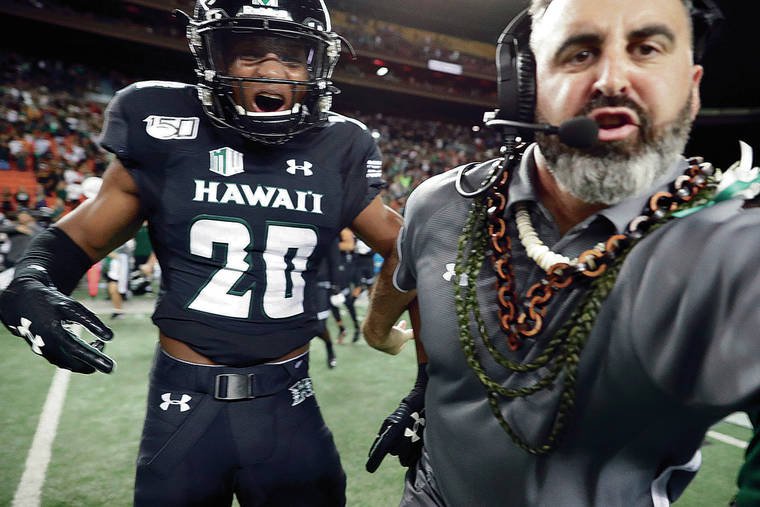 A photographer for the Honolulu Star-Advertiser says that he was assaulted during a University of Hawaii football game on Nov. 23, 2019, resulting in injuries and damage to his camera.

USA Today reported that photographer Jamm Aquino was standing on the sidelines when Hawaii coaches and players rushed the field after the opposing team missed a field goal, sealing the university’s victory. Aquino followed the team onto the field to photograph the celebration.

According to the Star-Advertiser, seconds remained on the game clock and therefore the game was not officially over. It was while the team rushed back off the field to avoid a penalty that Aquino says Hawaii coach Nick Rolovich charged at him while swearing and “made contact” with him. The outlet also reported that an Associated Press photographer next to Aquino was shoved.

Aquino told the Star-Advertiser that an unnamed university employee then shoved him to the ground, leaving him with a concussion and various other injuries and damaging his camera lens.

As Rolovich made his way off the field at the end of the game, he saw Aquino, pointed in his direction and again began swearing at him.

Star-Advertiser editor Frank Bridgewater said in the article, “Our photographers are representing our readers and deserve to be treated as professionals.”

“Swearing at and, worse, physically assaulting them, will not be tolerated,” Bridgewater said. “We will take whatever steps are needed to protect our photographers’ rights and to ensure that those who abuse them are called out.”

The university said in a statement that Aquino violated sideline protocol and that Rolovich came into contact with Aquino while attempting to clear the field.

Aquino did not respond to request for comment by the U.S. Press Freedom Tracker.

A CBS4 Denver photographer was shoved by the University of Colorado’s head football coach after the team’s game on Oct. 2, 2021, at Folsom Field, in Boulder, Colorado.In a video posted to Twitter, the unnamed CBS4 journalist captured the moment head coach Karl Dorrell shoved the camera down while he jogged off the football field.
More related incidents