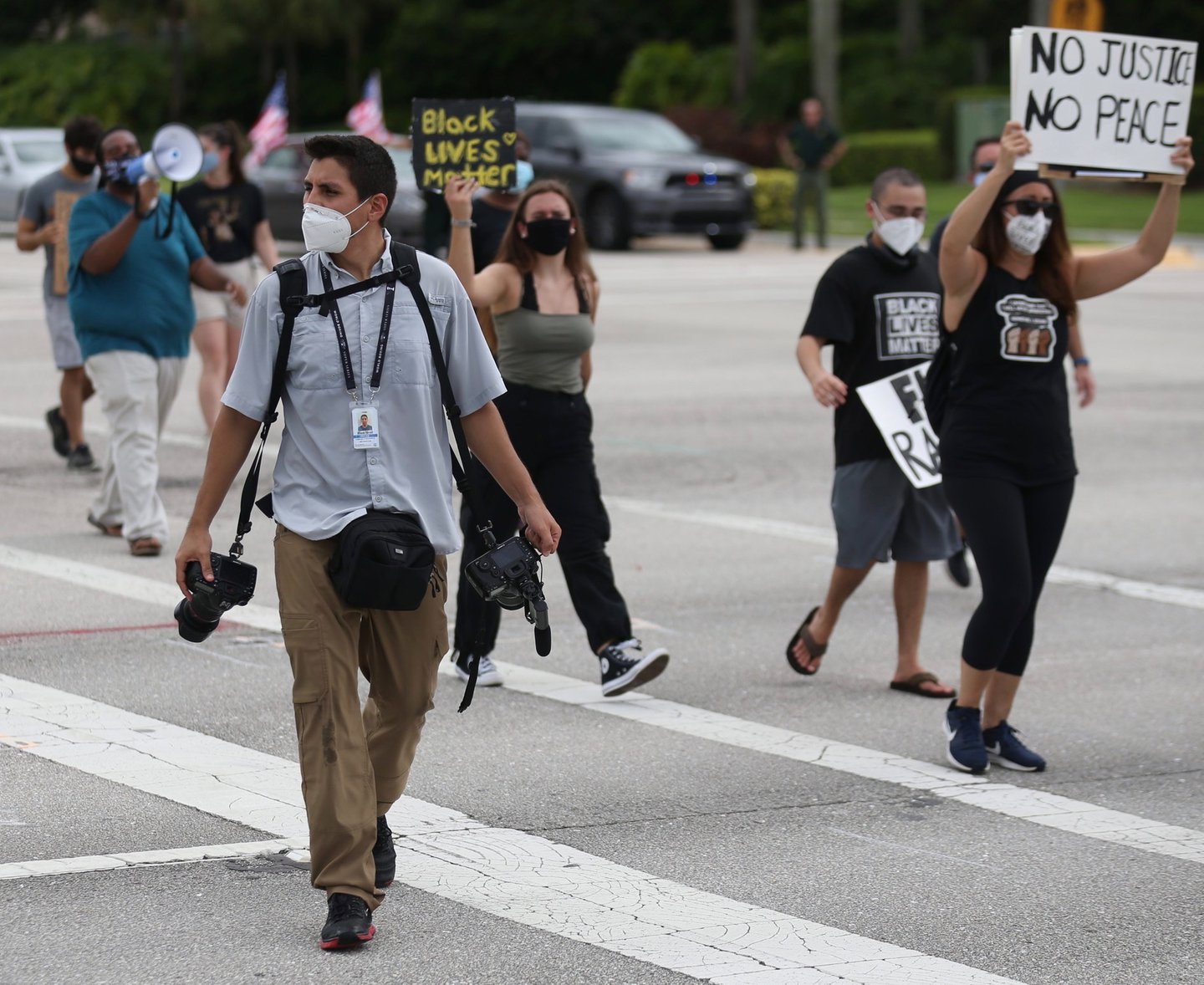 Photographer Sam Navarro covering a rally in Miami in July 2020.

Freelance photojournalist Sam Navarro said in an interview that was shoved into a wall by a police officer while he was covering a protest against police violence in Miami, Florida on June 6, 2020.

The protest was one of many across the country sparked by the May 25 police killing of George Floyd, a Black man, in Minneapolis. Navarro, who was photographing the June 6 demonstration for the Miami Herald, told the U.S. Press Freedom Tracker that the protest had been peaceful.

However, he said, at around 7:30 p.m., a large number of police officers confronted the protesters and declared an unlawful assembly. Navarro said most of the demonstrators left, but a few dozen remained.

Navarro was photographing the scene at the intersection of 107th Avenue and Eighth Street when one protester ran around behind him. He turned and saw police officers advancing rapidly toward him. An officer wearing a helmet and carrying a shield shoved him up against a concrete wall with a raised metal railing on the edge of the street.

Navarro said the officer let him go almost immediately after the impact, and he resumed photographing the scene.

Navarro said he later had a large bruise on his upper left arm from the impact. His two cameras banged up against the wall, but weren’t damaged, he said.

The incident was filmed in a video posted on Twitter by Herald reporter Joey Flechas.

About 25 officers hopped the barricade and slammed two people to the wall with their shields. One was running away. One was a photographer working for the Herald. Another woman sitting on the ground was arrested. This small number of people was declared an “unlawful assembly.” pic.twitter.com/jYpLEjqNrC

Later, as police were finishing arresting demonstrators, another officer asked Navarro if he was alright, the photographer said. The officer said he tried to pull Navarro away so he wouldn’t have been caught up when police advanced, but that there wasn’t time.

Navarro said he was clearly identifiable as a journalist. He was wearing press credentials on a lanyard around his neck, and carried two cameras with him.

The Miami-Dade Police Department didn’t return a request for comment about the incident.

The Tracker is documenting several hundred incidents of journalists being assaulted, arrested, struck by crowd control ammunition or tear gas, or having their equipment damaged while covering these protests across the country. Find these incidents here.

Tampa Bay Times reporter Divya Kumar was detained in the early hours of June 3, 2020, while covering a protest in Tampa, Florida.Protesters had gathered in Tampa and in cities across the U.S. to denounce police brutality following the death of George Floyd, a Black man, during an arrest in Minneapolis, Minnesota, on May 25.The Times reported that Kumar was arrested downtown when Tampa Bay Police Department officers declared an unlawful assembly near Joe Chillura Courthouse Square.The outlet reported that …